The Characters of Go-Go Boys of Club 21: The Complete Series by Cameron D. James

This week is the release of Go-Go Boys of Club 21: The Complete Series – and I wanted to take a moment to introduce you to the characters I’ve come to love so dearly in my year of writing out their saga.  I hope you feel the tugs on your heart and you want to know more about these boys and how they yearn to find love in their lives – so let’s met them!

Liam is a sweet young guy and one of the three premiere go-go dancers at Club 21.  The men watch him with awe and long to touch him, wishing they could take Liam home and make him theirs.  But Liam wants none of that – he’s still hurting after a bad break-up years ago and no longer wants love.  All that changes, though, when he does a private dance for Ryan.  As he grooves to the beat for the older man, there’s an undeniable energy that builds between the two of them, a sexual attraction that starts as lust and over time evolves into love.

Ryan is a former gay porn star, starting up his own studio.  He’s in New York City on business and spends a Saturday night in Club 21.  It’s there that he’s captivated by go-go dancer Liam and wants to get closer to the younger man.  A private dance from Liam quickly turns into hot sex and Ryan is hooked – he needs Liam like he needs air to breathe.  The only problem is that his business in New York is almost over and he’s due to return to L.A.  He makes a plea for love from Liam, and the chance to make him very happy in L.A.

Zack is the replacement for Liam when Liam runs of to L.A.  Zack is innocent and super cute, managing to catch Lance’s eye and make him not feel as bad that Liam has run off.  But when Zack and Lance embark on a smoking hot fling, Lance soon discovers that Zack has a dirty side.  For such an innocent-looking twink, Zack is a sex-addict who just can’t get enough.  But when he breaks Lance’s heart, just like Liam did, will Lance pick up and move on?  Or will he change who he is just so he can keep Zack?

Ken is the third go-go boy and undeniably the most provocative.  He has sex at the drop of a hat, often with Dan, the older bartender.  All Ken wants is sex, nothing else, but when Dan makes a surprising proposal, asking if Ken would like to be more of a regular with him, more like a boyfriend, Ken finds himself starting to fall for Dan.  It’s a sensation Ken has never experienced before and he doesn’t know what to do; he stumbles through this new relationship, discovering who he is and what his relationship to Dan is about.

Dan is like Ken, wanting as much sex as possible but without the entanglements of romance.  But with each hook-up he has with Ken, he can’t get the boy out of his mind.  He wants to be closer to him, to get to know him more intimately, and with the daring question of asking Ken on a date, he embarks on a new journey in life, one that will be far more exciting than he could ever expect.

To go on a journey of love, sex, and hearbreak with Liam, Ryan, Lance, Zack, Ken, and Dan, check out Go-Go Boys of Club 21: The Complete Series, now available!

We’re the go-go boys of Club 21. We dance, we fuel fantasies, and we give ourselves to the beat. We bump, we grind, and before each shift we have a jerk off competition; the order in which we come determines who gets the most desirable dance platform.

Normally, I shoot first, earning me the prime spot by the DJ. Ken usually comes shortly after me; he claims I get him excited. Lance, our new guy, he’s always last and ends up with the crappy spot by the pool tables.

Today, I decided to try something different—a strategy, if you will—to teach Lance an important lesson about being a go-go boy. I yanked down the front of my shorts and let my cock hang out, then grabbed it in my fist, stroking up and down the shaft. In front of me, Liam and Ken stood with their shorts tucked under their balls as they pumped with vigor.

I held back, loosening my grip just a bit, but still keeping it tight enough to stay hard and throbbing. I grunted and faked an impending climax, hoping it would give the other guys incentive to rush to completion.

“Sorry, Liam,” Ken said as he came down from that high of orgasm. I doubted Ken was actually sorry—he was definitely the bad boy of our trio. He drank, partied, and had a high-octane sex drive.

He stuck his tongue out at me, then crossed his arms and watched Lance and I battle to the finish. I kept stroking, making my effort look convincing. Lance fixed me with his usual cocky stare. Lust glazed his eyes too, no doubt fuelled by the actions of his fist.

Lance had joined us three weeks ago and I didn’t know too much about him. He was a quiet jock, a much better fit than Aaron, the airhead twink who he’d replaced. Having a jock in our small group was good for bringing in more customers. Ken and I were well-toned and we all had boyish charm—it was part of the job, after all—but Lance’s body was hard and toned, and packed with an impressive array of muscle. And boy, could he dance.

I didn’t realize I’d stopped stroking until Ken said, “You planning on coming?”

I shrugged, letting go of my cock. “I don’t think it’s happening tonight…probably shouldn’t have tugged it this afternoon.”

Lance and I pulled up our shorts too. I smiled at him, trying to give my best look of sheepish defeat.

“Hmm…are you trying to teach me another one of your go-go boy secrets?”

I grabbed my thick bulge and gave it a shake for him. “See this?”

Lance looked down at my basket and bit his lip, then reached in his shorts and adjusted himself. “Mmm. I get it. Don’t come so you’ve got a bigger bulge.”

“The bigger the bulge, the bigger the tips, no matter where you dance. I’ll prove it to you. I plan to make a killing tonight. Tomorrow, you can try and do the same. I bet you’ll make more than your usual thirty-seven bucks.”

I looked at Lance—he would keep a straight face if I lied. “We’re talking about bulges,” I said.

“Oh…in that case, that’s definitely a bulge I like.” Ken grabbed the front of my tight shorts, groping my cock and balls.

I swatted his hand away. “No touching unless you’re tipping. You know the rules.”

Ken laughed and swiftly turned around. He slapped my ass as he passed me. “I like your butt better than your bulge, anyway.” 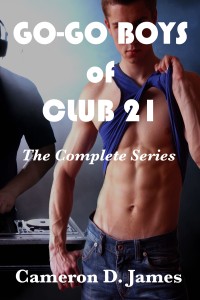 Club 21 is known across New York City for having the hottest go-go boys. They groove to the beat, fuel fantasies, and leave you begging for more.

Lance is the newest go-go boy. He took the job because he’s infatuated with Liam and hoping for a chance to get to know him better, but only gets a broken heart as he watches Liam chase some guy he barely knows. As Lance pushes to get closer to Liam, he only pushes him further away.

As the beat goes on and the tempo changes, will Lance be able to win the man of his dreams? Or will Liam forever go off in search of new excitement?

Originally released as five separate stories, this volume at last collect the Go-Go Boys of Club 21 into one hot volume.

For links to other retailers, please visit my website here: http://camerondjames.com/books/Go-Go_Boys.html

Cameron D. James is a life-long lover of books, voraciously reading everything from the classics to sci-fi, romance to science and nature, and thrillers to erotica. Understandably, a love of books led to a love of writing, having penned his first story in grade seven (about stolen baseball cards). Having written millions of words by now, Cameron now focusses on one of his favourite genres — gay erotica.

Cameron is a fan of Star Trek, having seen every episode of every series (including the animated series) and every movie at least twice. In addition to Star Trek, Cameron also loves physical exercise and seeing how far he can push his body. He’s taken kickboxing, Bikram hot yoga (that’s the super hot and tough one), diving, personal training at the gym, and likes his regular Wii workouts (seriously, they’re a lot more intense than they look).

Other interests include listening to electronica music (particularly Armin Van Buuren), puttering around the house (and attempting to grow a garden), and gawking at cute twink baristas at the various coffee shops where’s he’s such a regular that he’s known by first name.

Make sure to follow the whole tour—the more posts you visit throughout, the more chances you’ll get to enter the giveaway. The tour dates are here: http://www.writermarketing.co.uk/prpromotion/blog-tours/currently-on-tour/cameron-d-james-2/

One Response to “The Characters of Go-Go Boys of Club 21: The Complete Series by Cameron D. James”