Thank you, KD, for having me here today!

My husband told me recently that there’s a website in my hometown called Sugar Babies, where hot female students from the University offer their services as escorts (ostensibly with no sex involved because that would be illegal). I’ve always been fascinated by this sort of arrangement. I guess it fits right in with my adoration of a power exchange in which one person is boss and the other is there to, well, let’s just say please.

In my new book, Mob Mistress, Bobby Manghini, a dominant hero with ties to the mafia, feels the same way about that sort of arrangement.

With a mistress, there was an unspoken — or maybe even spoken — business arrangement. The woman received financial benefit in exchange for being available. And he loved holding power over his woman.

Here’s what happens when he’s introduced to Lexi, a hairstylist in financial crisis ( the meeting is in Lexi’s point of view):

“I told her you’d make a good sugar daddy,” Gina said with a smirk.

She felt her cheeks grow warm.  Good God, now he would think she was a money-grubbing, desperate floozy.

The statement only seemed to interest Bobby, though. He turned his attention to her. “Is that so?”

She opened her lips to deny it, but found herself caught in his heated gaze, the appreciative assessment obvious. Forcing herself to exhale, she said, “No, she was only kidding.”

Bobby reached over and grasped the seat of her chair, pulling it forward until her knees came between his.

She gasped at the sudden movement and gave a nervous giggle. “What are you —?”

He made a show of looking her up and down. “Yes, I would definitely say you are sugar baby material.”

Dean and Gina laughed, egging him on.

She looked skyward again. “I feel like a horse at auction. Look, I never said —”

Bobby grinned and took hold of her jaw. “Right! Let’s see those teeth, little pony,” he said, pulling her face toward him. Instead of looking in her mouth, he lowered his face, sweeping his lips lightly across hers. Softer than she expected, they tasted faintly of whiskey. Though she ought to be turned off by being so manhandled, the moment he pulled away, she missed his touch, wanting more.

Her heart rate quickened. Was this actually happening?

Bobby grinned and sat back, releasing her from his scrutiny.

Recovered from her fluster, she gave herself a quick pep talk. What did she have to lose, really? A sugar daddy would solve all her problems, if this was for real. She gave him a seductive look. “Are you in the market for a sugar baby?”

He threw his head back and laughed, a deep, rich rumbling sound that for no known reason made her tingle. “As a matter of fact, I am. But when I take a goomah, I expect her to be at my beck and call, available any time I please.”

She swallowed, her panties dampening at the idea of being his sexual servant. “And what exactly would you offer in return?”

Bobby placed both his hands on her thighs and made little circles around her knees. “Living expenses and spending cash. How does that sound?”

Gina and Dean made enthusiastic murmurings as their eyes locked. Heat pooled in her center core, traveling up until her face grew warm. Her breath rose and fell in a rapid rhythm.

He leaned closer and spoke in a low, rumbling voice, “But you should know, I would use you however I wanted, whenever I wanted. And I would demand fidelity. No other men.”

“What about women?” she asked. 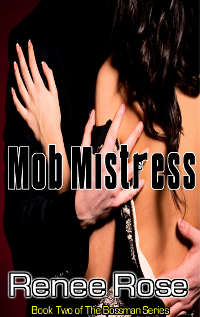 When hair stylist Lexi Tyler finds herself evicted from her apartment, her best friend sets her up with the mobster Bobby Manghini, knowing he likes to play sugar daddy. He offers her a luxury apartment overlooking the city and spending cash every time he sees her, but one thing is clear: he is the bossman.

Lexi soon discovers Bobby backs up his rules with firm, over the knee discipline, but he also takes responsibility for all her problems, giving her more support than she ever dreamed of having from a man

Mobster Bobby Manghini likes to be the man in control, particularly with women, which is why he prefers a mistress for sex, even though he’s no longer married. When he strikes a deal with Lexi to be at his beck and call, he finds in her the full package — a hot, intelligent woman who is turned on by his dominance and willing to submit to his punishment. But when she finds out he doesn’t have a wife, she is hurt by the deception and severs all ties.

Can he prove to her their relationship meant more than a business arrangement? Or will he lose the one woman willing to give him everything he ever desired?

She can be found on: