Starla Kaye Tells the Story Behind The CEO and the Cowboy

It’s my pleasure to welcome Starla Kaye to Hopeful Romantic to share the story behind her hot new novel, The CEO and the Cowboy. And Starla is offering an exciting contest as well. Leave a comment with your email address for a chance to win a copy of either MAGGIE’S SECRET WISH or STARTING OVER from Decadent Publishing and a special gift: a Spurs auto coaster. Contest ends October 6.

I live in the mid-west and tend to write most of my stories somewhere in familiar territory. Kansas City is one of my favorite places and I especially love the Country Club Plaza area. There are some really beautiful houses along Ward Parkway and I couldn’t resist having my CEO hero, Daniel Patterson, living in one of them. The cover even has a cityscape of the Plaza area, which is perfect.

My other hero, the cowboy Calhoun Cordell, has a ranch in the Flint Hills near Manhattan, Kansas, which is another area of Kansas that I am familiar with. His ranch doesn’t actually play much of a part in this story. But I will be writing a sequel and the ranch will have a bigger role in it. 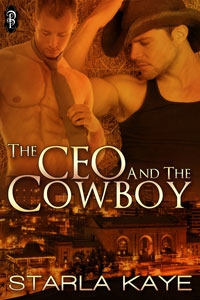 THE CEO AND THE COWBOY is my second m/m romance for Decadent Publishing. It is another story of two heart-wounded, struggling men trying to make sense of their lives and stumbling into an unexpected romance. Although my main romance writing is m/f, I am enjoying writing these special stories. Everyone deserves to be loved and to love someone. All that matters to me is that my characters are in need of finding that one special person who makes their life complete.

Since the biggest percentage of my 50 some published stories involve cowboys, I wanted to write a story about a rancher, and I enjoy writing stories with businessmen as heroes. So I had my two basic characters in mind and a general location, then all I needed was a way to get these two men together. Who knew they would both show up at Calhoun’s ex-fiancée’s wedding! I certainly didn’t when I sat down and started writing the story.

That’s how I tend to write my stories. I come up with a title first, character names and a basic idea of what they look like next (I use photos from somewhere to refer to as I write occasionally). Then I come up with what in their backgrounds or current life might be a conflict between them. Sometimes I have a really loose idea of plot points to aim for, but I don’t outline. I’ve learned over my dozen plus years of being published that outlining in too much depth ruins the story for me. I feel like I’m finished with it after putting so much work in an outline. And my characters usually hate the outlines, too. They become “real” people (to me) and they want to follow their own paths in life, make their own mistakes, run into their walls and have to figure out ways around them. They take me along for the ride. I love working this way and I love the unexpected twists in the story telling.

THE CEO AND THE COWBOY has one such unexpected twist after Calhoun and Daniel have this sort of falling out. I wouldn’t have guessed they would do this (and I’m not telling you what happened), but it fit them and the story. So basically I’m a go-with-the-flow kind of writer.

The whole thing about relationships and feelings confuses the heck out of Calhoun. He’s a simple cowboy and he’d been planning to marry a long-time friend for a while. When he finally realizes it doesn’t feel right, he lets her go. He probably shouldn’t have gone to her wedding to another man, but she wanted him there. But that’s when he really gets confused. His eye is drawn to a seriously hot businessman…and that sure does unnerve him…and yet….

Emotionally burned by the last man he thought he’d loved, Daniel isn’t anxious to replace him. But there is something about the proud, bedroom-eyed cowboy who shows up at his friend’s wedding. The CEO isn’t even sure if the cowboy’s gay, although the heat firing between them makes him wonder….

What he does know is that he plans to find out.

Calhoun wondered what the hell he was doing in Patterson’s home, why he’d agreed to come here. From the second the man had asked him to see his Western art collection, he’d sensed there was more to it than that. The way he’d kept looking at him over his beer with such heat in his eyes…the strange way he hadn’t been able to look away…all of it unnerved him. Yet here he was, following him up the large, winding staircase, up to his bedroom, no doubt. Another guy’s bedroom! Holy hell.

Even more unsettling, he’d just been kissed. By a man! Damn! And it had felt…well, good. No, better than good. He’d even kissed him back. His chest pounded; his mind whirled with all the things happening to him, with myriad confused feelings spinning through him.

Patterson climbed the stairs in front of him, his long legs taking them two at a time. With each step the fabric across his ass pulled tight. For a city boy, a businessman, this man had a mighty fine butt. Another thought that unnerved him. He’d admired men for dressing well or acting confident and in charge, traits he identified with and appreciated in others. But he’d damn sure never spent any time admiring another man’s body.

“You okay?” Patterson moved onto the landing and glanced back at him.

He saw beyond the other man’s proud exterior, saw the hint of vulnerability in his eyes. It was clear Daniel had experience in what was happening between them, while he had only a very limited knowledge of such things. Daniel seemed…worried about him. The notion settled his nerves a bit.

“I’m hanging in.” That was as much as he could admit. Fact was, he still thought he should turn tail and run like the blazes in the other direction. He met his gaze.

Relief passed through his eyes, and he turned down a long hallway. With his first step, he passed in front of some kind of sensor because lights came on along the floorboards and ahead in a room Calhoun figured must be where they were headed. His bedroom. Never in his wildest imaginings would he have believed he’d be following another man to his bedroom. His gut tightened. Sweat beaded his spine and upper lip.

Patterson—maybe he needed to think of him on a first-name basis now—waited for him just inside a room big enough to sleep a dozen or so people, except there was only one bed. A hell of a bed it was, too. He’d never seen anything like the obviously king-sized—maybe bigger—bed with four thick columns for bed posts and a fancy carved headboard as tall as he was. A thick red and black comforter covered it. He gave the rest of the dark wood furnishings barely a glance. Mahogany, were they? It was the bed that caught and held his attention.

By the time he’d stopped gaping at the bed, Daniel had removed his suit jacket and tie. His white dress shirt was half unbuttoned. Through the slight opening, he noted a light dusting of dark, curly hair. His own chest was smoothly bare, a genetic thing from his long-ago Comanche great-great-great-grandmother. His mouth watered, and it surprised him that he wanted to touch that chest hair. He shouldn’t want to, shouldn’t even be thinking about it.

“We can stop right now.” He again offered him an out, although he sounded hopeful. “I’m going to tell you up front I want you. I’ve wanted to strip you out of your fine Western suit from the moment I saw you walk into the church.” 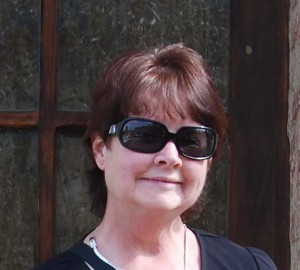 Family is extremely important to me. Life is far too short not to spend time with these special people in some way each day. My husband supports me in my writing craziness…always eagerly waiting for that million-dollar sale. (Dream on.) My daughter supports me in so many ways, including designing my website and fixing the many computer screw-ups I manage on an almost daily basis. And the rest of my family is there for me whenever I need them. I live for them all and love them with all of my heart. I laugh with them, too.

Beyond my family, I enjoy traveling anywhere, at anytime. I’ve been fortunate enough to see so many interesting places over my life, places I’ve read about or heard about. All of my many adventures and observations of people and places help my writer’s imagination. I’m filled with ‘what ifs’ and ideas for yet more characters. My writing, too, leads me on many adventures. I dabble with romances of many sub-genres: contemporary, historical Western, medieval, sci-fi, paranormal, and Regency. As with never having enough of traveling, I will never have enough of writing.