This is my second spot on my pre-release book tour and I’m so excited to be here. Yesterday I had a fantastic interview and today I want to give a download on my heroine, Sorella Corvino.

Sorella is a trained assassin and spy. Raised in Italy, she was supposed to marry well and proceed on a mission that would’ve benefited the ruling Kaiser of Europe. Yet, my girl doesn’t always follow the rules and she ditched her family and life for a chance to find her brother.

Sorella Corvino only made promises she kept. So when she told the crumb in the next cell, “Once I get out of here, I’m going to kill you,” those were words of truth, not fiction.

The evil bastard leaned forward, mere inches from the bars, and grinned. “I prefer my bits handled by a gorgeous dish, but in a pinch, you’ll do.” His six yellowed teeth stabbing up through pinkish-white gums were a stark contracts to his soot colored skin and graying eyes, the gray no doubt a product of the drugs and rotgut sold on every corner in Pontevedre. No one escaped the filth and poison festering in the streets of every European city unscathed.

“In your dreams.” She stepped towards him, eyes narrowed. Maybe she wouldn’t wait until she got out.

“That’s what your girl is dreaming of tonight. Me and my co—“

She slid her hand between the bars and grasped the part of his anatomy he wanted to talk about in every other sentence, effectively cutting him off. 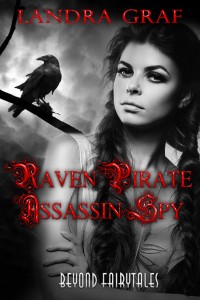 Once Upon A Time…
Sorella Corvino lost her brother to The Cursed years ago. Sorella is so determined to find him, she’ll make any deal, rescue the outcasts and those like him, and risk flying into any port to rescue him. When her latest pirate efforts partner her with a bounty hunter who’s too charming, sexy, and handsome for his own good, she knows she’s in trouble.

Ian Marshall no longer believes in fairy tales…
Disowned and a marked criminal in the United States, this merchant turned bounty hunter, is one bounty away from freedom; and freedom’s price is handing over one person to the most cutthroat gang in the world, The Cursed. Yet, he can’t get to them without Sorella’s help. Too bad she’s gorgeous, aggravating, and a little trigger happy.

As the attraction mounts, the danger grows and the pair find themselves invading a skin trader den, the ballrooms of dictator-ruled Germany, and fighting battles in the sky in the hopes of getting everything they want. Only thing they didn’t plan on… falling in love.

Landra Graf consumes at least one book a day, and has always been a sucker for stories where true love conquers all. She believes in the power of the written word, and the joy such words can bring. In between spending time with her family and having book adventures, she writes romance with the goal of giving everyone, fictional or not, their own happily ever after.

Be sure and check out the rest of the spots on the tour here for more chances to win!