Quarantine: The Story Behind the Story By Lisabet Sarai

It’s my pleasure to welcome the amazing Lisabet Sarai to A Hopeful Romantic on her blog tour for her stunning story, Quarantine. Welcome, Lisabet. Tell us the story behind Quarantine.

I don’t know if I would have written Quarantine if I’d been brought up as something other than Jewish.

None of my family members personally endured the Holocaust. They immigrated decades before the Nazis rose to power. Nevertheless, when you’re a Jew, even a non-observant one like me, the concentration camps and the gas chambers are part of your legacy. The notion that a government might systematically imprison and exterminate millions on the basis of their religious or ethnic background may seem far-fetched and difficult to believe to most people, but when you grow up Jewish, you know the truth. Humans have surprising capacity for evil.

I was an adult before I learned about America’s own camps, where millions of Japanese-Americans were detained during World War II. Of course these individuals weren’t slaughtered, but some did die, of disease or malnutrition, and many of those that survived lost their property, their livelihoods and their communities.

When I listened to the rabid anti-gay rhetoric of right wing politicians and religious figures in the United States, I realized that it wouldn’t take all that much to tip society in the direction of interning gays. (In fact homosexuals were among the victims of Hitler’s “final solution”.) The premise of Quarantine came from that realization, along with the vision of persecution we Jews seem to carry in our bones.

Dylan and Rafe first came to me as characters for a short story, in response to a call for gay BDSM erotica. I could imagine the power differential between a camp guard and a gay prisoner, in a world where being homosexual was a crime. I soon understood that this was far too complicated a scenario for five thousand words. As I started to work on the idea, I saw that the power dynamics could be far more nuanced than I’d initially imagined. In the final novel, Rafe is ostensibly the one on top, but Dylan controls much of the action through charisma and craft. 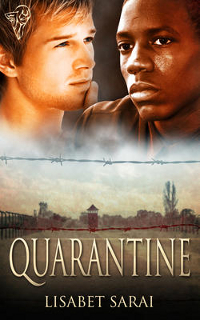 When love is forbidden, the whole world’s a prison.

Dylan Moore will do anything for freedom. Seven years ago, a gay epidemic spread to heterosexuals, killing millions and sparking brutal anti-gay riots. The Guardians rounded up men who tested positive for the homogene and imprisoned them in remote quarantine centres like desolate Camp Malheur. Since then, Dylan has hacked the camp’s security systems and hoarded spare bits of electronics, seeking some way to escape. He has concluded the human guards are the only weakness in the facility’s defences.

Dylan’s plan goes awry and Rafe comes to his rescue. Soon they’re both fugitives, fleeing from militant survivalists, murderous androids, homophobic ideologues and a powerful man who wants Dylan as his sexual toy. Hiding in the Plague-ravaged city of Sanfran, Dylan and Rafe learn there’s far more than their own safety at stake. Can they help prevent the deaths of millions more people? And can Rafe trust the love of a man who deliberately seduced him in order to escape from quarantine?

Rafe rammed his prick into Dylan’s mouth, seeking heat and wetness. Meanwhile, he opened wide and engulfed his lover’s cock, sliding his lips down the length. The taut skin was velvety and smooth. He thought he could feel Dylan’s pulse against his tongue. He licked at the warm, ripe flesh. It felt so alive, so full, ready to burst.

The white guy was close. Rafe bore down, tilting his head back to lengthen his throat. Dylan arched in response, slamming his bulb against Rafe’s palate. Rafe fought the urge to choke. He knew how good it felt to let everything rip, to drive your cock deep, as deep as you could, to ravage someone’s willing mouth, holding nothing back, nothing…

Without warning, or at least any that he recognised, yeasty fluid filled his mouth. He coughed and swallowed. Dylan’s cock convulsed, spitting out more gobs of warm liquid. Rafe gulped down as much as he could, the remnants leaking from the corners of his lips. The odd taste, the unfamiliar sensations, and most of all, the knowledge that he’d sucked his lover to climax, all combined to take him over the edge. With one last thrust, he let go.

The pleasure was round and full, different somehow from his usual wild, jagged orgasms. It surged up from his depths, powerful, irresistible, sweeping away every thought in a blissful tide of satisfaction. For what seemed like hours, the waves rolled through him, pleasure swirling up from his balls and out onto Dylan’s tongue.

Thanks, K.D, for having me as your guest. This post today is part of my Quarantine blog tour, which will run  through the 24th of July. I’ll be giving away an ebook to one commenter at each stop on the tour. So leave a comment – and don’t forget to include your email address so I can contact you!

I’ll also be choosing one commenter from the entire tour to win the grand prize – a $50 All Romance Ebooks gift certificate. Meanwhile, all comments at my own blog Beyond Romance (http://lisabetsarai.blogspot.com) during the tour will also go into the drawing for the gift certificate.

You’ll find the schedule for the tour in my July newsletter: http://www.lisabetsarai.com/news.html

You can watch the sensational Quarantine trailer here. And if you’re interested in getting your own copy of Quarantine, just go to Total-E-Bound (http://www.total-e-bound.com/product.asp?P_ID=1725)!

Lisabet holds more degrees than anyone needs from prestigious universities who would no doubt be embarrassed by her chosen genre. She loves to travel and currently lives in Southeast Asia with her highly tolerant husband and two cosmopolitan felines. For more information on Lisabet and her writing visit Lisabet Sarai’s Fantasy Factory (http://www.lisabetsarai.com) or her blog Beyond Romance (http://lisabetsarai.blogspot.com).

Kitti Bernetti Dishes the Dirt Behind Her Novella, The Thousand and One Nights → ← Welcome Grace Marshall: As Interviewed by Her Naughty Twin

5 Responses to “Quarantine: The Story Behind the Story By Lisabet Sarai”