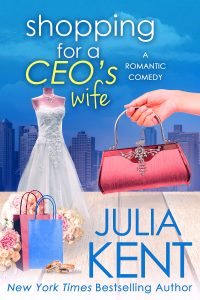 Snowbound. Sounds so romantic, with visions of cuddling before a roaring fire, hot chocolate spiked with brandy, and a secret elopement.

My fiancé’s father won’t stop trying to turn our pending wedding into a three-ring media circus so he can get free publicity for his family’s Fortune 500 company. My mother has decided she’s done with All Things Wedding and asks her teacup Chihuahua for mother-of-the-bride advice.

Then the stress from the wedding puts my mother in the hospital, I scream at my future father-in-law in front of a camera crew and the video goes viral, and the romantic wedding that started with Andrew’s grand Pride and Prejudice proposal looks less like Jane Austen and more like Dostoyevsky.

So what do you do when you’re a fixer and you can’t fix something?

You give up on it.

Not on Andrew, silly.

Shopping for a CEO’s Wife is the 12th book in Julia Kent’s New York Times bestselling Shopping series. As Shannon and Declan enjoy their newlywed bliss, Andrew’s father wants to exploit Amanda and Andrew’s nuptials, much to Amanda’s chagrin. Can she learn to stand up to her future father-in-law and fight for what’s right? But the real question is: will Spritzy the teacup Chihuahua end up being a flower girl? 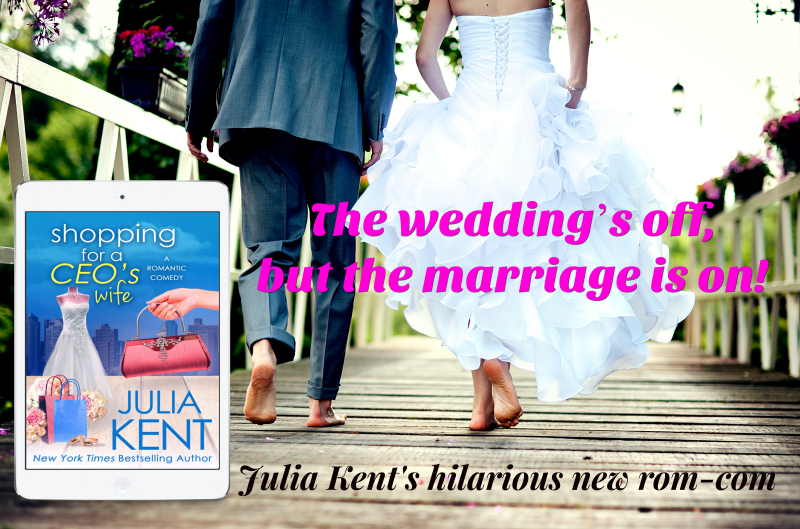 Saved by his phone. Andrew scrolls through his texts with a half grin. I know that look. He thinks he won. Won what? I decide on the spot that we weren’t having an argument. Not even a heated discussion. This is what being in a lifelong relationship is all about, right?

Pacing. I have to pace myself when it comes to conflicts, big and small. Especially small. Letting him think he won this one is important. Give an inch.

“It’s Dad again,” Andrew says with that mysterious new tone of voice he’s developed. I watch him as he reads his phone, eyes drifting over the screen, hair messy from the skiing earlier. Deep brown eyes narrow as he reacts to whatever his dad said. The muscle between his jaw and ear pokes out with tension as he swallows and swipes on his phone. He blinks rapidly, but his breathing doesn’t speed up.

I tuck away his reaction in my mental database.

Lately, I find myself watching him with a strange fascination. Openly, obviously, and without hesitation. Andrew doesn’t seem to mind. I know he knows I’m doing it, but so far, he hasn’t questioned me. If he were to ask, I couldn’t tell him why. I don’t know why.

“What did he say now?” I ask politely, knowing the answer.

“It’s about the wedding,” Andrew answers, giving me a look that says, Of course. “He insists we need to hold it at Farmington, like Declan’s wedding.”

“His PR team says it’ll get more press. All the major media outlets will station vans there, and the comparisons will generate easier headlines.”

“What does that mean?”

Andrew rolls his eyes. He reaches across my lap and grabs his abandoned coffee mug. The stretch makes his shirt hike up slightly, exposing his waistline, a thin wedge of tanned muscle coming into sight. I catalog it, like I always do these days, and wonder when this will become boring.

“Dad thinks that the press will be more invested if they can sensationalize our wedding ceremony. ‘Will they or won’t they escape?’” Andrew uses one hand to make finger quotes.

“He expects us to be in Declan and Shannon’s shadow on our wedding day?”

“That’s exactly what I said to Dad! Almost word for word. And I told him no. Hell, no.”

“What was his response?”

“That we should ask your mother.”

New York Times and USA Today Bestselling Author Julia Kent writes romantic comedy with an edge. From billionaires to BBWs to new adult rock stars, Julia finds a sensual, goofy joy in every contemporary romance she writes. Unlike Shannon from Shopping for a Billionaire, she did not meet her husband after dropping her phone in a men’s room toilet (and he isn’t a billionaire). She lives in New England with her husband and three sons in a household where the toilet seat is never, ever, down