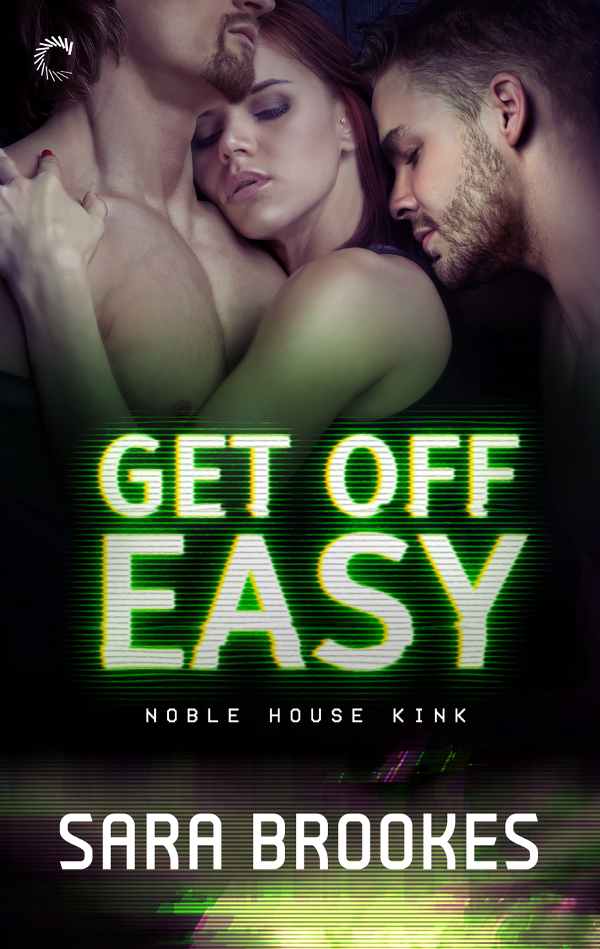 At Noble House, fantasy has no limits. Log on and enter a world of your most secret desires. And remember, there is nothing more noble than the pursuit of passion…

I shouldn’t be watching, but I can’t look away.

It’s been years since I’ve seen Ford “Saint” Templar or Boyce Denali in person—although the gorgeous men have haunted too many of my fantasies to count. But now they’re here, right on my screen. Together. It’s the sexiest thing I’ve ever seen.

And I want in.

Noble House is the kingdom of geek kink, where the thrill comes from knowing that someone is always watching. All I have to do is be brave enough to turn off the screen, walk through the door and ask Saint and Boyce to take me back.

We used to be so good together, but we’re different people now. Will Saint’s commands still bring me to my knees with desire? Will the anticipation of Boyce’s touch still drive me wild? Will I be able to survive the pleasure of having them both?

It’s time to stop watching. I need this. I need them. And just maybe, they need me, too.

Darkness surrounded Grae. In her life. In her mind. And even in her office as she leaned back in her overstuffed, overpriced chair and yawned. The creature comforts weren’t enough to keep her interested in the image flickering on her computer screen. Not that well-chiseled abs didn’t do it for her. They totally did. But considering the fact she’d been the one to draw, define, and enhance each one of those tongue-licking indentions, the final product had lost its appeal hours ago.

As long as the female audience members went wild, she would keep plodding along. Not to mention, if she didn’t deliver, she wouldn’t be paid her hard-earned check. As tempting as it was to continue, she desperately needed a break.

A quick glance at her trusty desktop clock showed she hadn’t stopped for over thirty-six hours. Since she was on a deadline, her director’s schedule won out over sleep and basic hygiene. Especially because she was under contract. If she wanted another shot at working with this director, she needed to have this guy’s abs painted on and swoon-worthy in the next three hours.

One hell of a reward awaited her after she completed her work, too.

As she made her way to the kitchen to refill her carafe, she tapped the reminder postcard that arrived two days ago against her chin. Fresh coffee would get her through. At least it had to. She’d worked under tighter deadlines, and on less sleep, than this project.

Thirty-six hours with no sleep was kid’s stuff.

Her reward, however, was not child appropriate.

Kochran Duke was throwing one of his famous parties tonight. The events, where participation was allowed by members both at the club and online, were not low-key and always the highlight of the month. It also meant there was a distinct possibility Saint and Boyce would attend. They never missed a party at the converted armory. No telling what they’d be doing, though.

It was always a surprise when it came to those two.

She shoved a fresh filter into the brew basket, dumped in beans and water, and realized she didn’t care. They could sit and read nursery rhymes to one another, and she’d still get off. Wasn’t as though she’d joined Kochran’s exclusive website only to watch the pretty boys play with their toys.

Okay, well, it wasn’t the only reason.

And it had nothing to do with satisfying her voyeuristic tendencies.

Her former Master recommended the online dungeon when it became obvious she had all the desire and drive to submit, but none of the time. Noble House offered several levels of membership depending on participation or observation. The fees were steep, but it was a small price to pay for satisfying a guilty indulgence from the privacy of her home office.

Once she’d discovered two of her closest friends from college were Dominants at Noble House, her interest in the private club increased tenfold. Thanks to alumni updates from the university, she’d known they’d continued to date after they graduated. Even knew where they lived because of an article published six months ago in the yearly alumni newsletter about the building they’d saved from the wrecking ball and turned into an apartment complex. Knowing they were still together, and trying to change the world, warmed her heart.

And a few other strategic lady bits.

Someday she would visit Noble House. Though the idea of taking a vacation long enough to visit Northern California sounded absurd. With the constant trail of work following her wherever she went, taking a break was unheard of. Visiting friends she hadn’t seen in more than a decade was even more ludicrous. As was confessing she’d seen every one of their broadcasted scenes since she’d become a member.

And hunted through the archives.

The coffeepot chimed. She dumped the contents into the carafe, then grabbed the French vanilla creamer. As she made her way back to her spacious office, her eyes slowly adjusted to the permanent darkness she’d created thanks to heavy light-blocking blinds. Day or night, the lighting in the room never changed. When she’d decided to leave the guaranteed contract with the big-budget movie studio behind and become a freelancer, she’d invested in all the bells and whistles. No sense working from home without the proper equipment.

Six monitors wasn’t too much, right?

A quick check of the emails she’d been ignoring for the past few hours indicated the director was getting aggravated. Time to buckle down and turn out this masterpiece. Armed with a fresh cup of coffee, Grae leaned back to watch the fight sequence she’d been working on for the past week. She noted a few minor inconsistencies she could smooth over while she waited to see if she had approval. No need to waste her time if the director wanted to ditch the segment.

Task completed, she zipped the file, then dropped it onto her secure server. An email containing the link to the director was next and meant her part was complete. She flipped a switch to change over to her personal computer tower and waited for it to boot. When it finally beeped in greeting, she directed the browser window to Noble House’s main site. A few keystrokes, and the splash page for tonight’s event flashed onto the huge screen she’d mounted on the wall.

Two very familiar faces stared back at her.

Boyce Denali, the one on the left, wore heavy-duty leathers. Too bulky for working inside the club. These were the kind used for protection should he take a spill. Though she doubted he would ever be so careless. Boyce was the kind of man the pavement moved for. Dark blond, piercing blues, muscles to die for, and a chiseled bone structure even the most formidable Viking would find intimidating.

Ford Templar, on the other hand, was all dark and mysterious. Nicknamed Saint at the club, Ford was broody. Sulky. Dark hair. Olive skin. Lean muscles. The dark to Boyce’s light. Except his eyes. Those eyes. Eerily colored, they reminded her of glass Coke bottles. Rumor had it his gaze could pierce right through to someone’s soul. While Boyce held a commanding air that demanded to be heard, Saint wore his power subtly but was still all dominant authority.

Seemingly connected at the hip, the two men scened together every week. Much to her delight. Grae didn’t think she’d ever seen them work with a submissive alone. Not that the choice to only carry out ménage scenes affected their standing at the club. Not in the least. Every time they worked together, their scenes had been nothing short of spectacular.

“Let’s see what you’re up to tonight, boys.”

Sara Brookes has always been fascinated by the strange, the unusual, the twisted and the lost (tortured heroes are her personal favorite). She is an action movie junkie, addicted to coffee and has been known to stay up until the wee hours of the morning playing RPG video games. Despite all this geekiness, she is a romantic at heart and is always a sucker for an excellent love story.