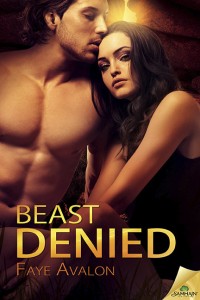 To embrace the future, they must defy the past.

Naomi Flynn never intends to mate or marry. Either one would leave her open to the manipulation she’s sworn never to endure again. Besides, no panther male will want her once they know the truth behind what happened a decade ago.

She’s happy to burn up the sheets in a buddy-with-benefits arrangement, until a craving for a three-way sexual adventure thrusts her right back into the arms of the man she can’t afford to remember.

Tynan Galloway doesn’t intend to stand by and watch the woman he wants throw herself at every male with a pulse except him. Ten years ago, a brutal assault robbed him of his destiny as a protector of the pack, but damned if Naomi is going to be another casualty of his fate.

In the heat of a fantasy come true, Naomi’s resolve to keep her emotional distance weakens. But when Tynan discovers she’s in potential danger, he dares her to deny he’s the only man who can protect her. Never expecting she’ll go to extremes to prove him wrong…

Pushing through the jittery discomfort, Naomi moved until her back was to the men. She reached around to unhook her bra, then held the unfastened cups close to her chest. Turning back, with the men’s gazes focused on her still-covered breasts, she let the straps fall away. There was a sense of power, Naomi thought, in holding a man enthralled, or in this case, men. While it might have been better easing herself into this particular game more gradually, there was sometimes a lot to be said for simply plunging in at the deep end.

Reminding herself this was her choice, her fantasy, she let her hand fall away, and the bra fell to the floor.

Malcolm groaned, his prick bobbing again. Derek had barely moved, but his throat contracted as he swallowed.

Twisting around again, Naomi hooked her fingers into the sides of the wispy black panties and began to lower them down over her hips, the cool brush of air on her bared backside sending shivers along her sensitive flesh.

“Fuck. Get over here before I come just by looking at you.”

Malcolm, Naomi thought. The more gregarious of the two. Derek was far more intense, quietly watching her as the three of them had chatted in the bar, and now while she performed her striptease.

When she turned back, Derek was on his knees at the end of the bed. His eyes gleamed dangerously, and he grabbed her wrist, yanking her onto the mattress. She tumbled facedown, the breath knocked out of her.

Hands trailed over her naked flesh, sliding up her thighs, cupping her rear, stroking her back. Roughly, she was tossed onto her back, and she looked up into Derek’s menacing gaze. His cock pressed against her leg, while Malcolm cupped her pussy.

Oh shit. What was she doing? She didn’t know these men. Had no idea what sort of people they were apart from the fact they were down from London on business and, like her, were looking for a good time.

She was such an idiot. She needed her damned head examined.

Her strength was greater than that of human women, but when she tried to scramble up, Derek pressed her back with ease. “You’re not going anywhere until we get what you’ve been promising all evening.”

Malcolm laughed and pressed his finger inside her. “She’s up for it,” he said on another laugh. “Just likes to make it more exciting, don’t you, babe?”

He pushed deeper, making her flinch. “Like that, don’t you?”

Derek shoved Malcolm aside, then scrambled between Naomi’s legs, pushing them apart with his knees. She tried again to get up, but he pressed a hand to her shoulder, weighing her down. “Give me a damn condom.”

Malcolm tossed him the foil packet, and, keeping his gaze on hers, Derek ripped it open. His feral look pushed fresh fear into her stomach, and with every ounce of strength she possessed, she tried to scramble up. She couldn’t budge him.

Derek released his hold on her shoulder to slide on the rubber, but before she could take the chance to escape, Malcolm pinned down her arms.

Panic clutched at her throat, nausea churning her stomach. Oh God. This was so not how she’d thought it would be.

With his face a snarling mask of determination and sickening lust, Derek yanked up her hips.

Her throat was so tight, she could barely enunciate, and it was evident he hadn’t heard her when he grabbed his cock and leaned over her.

“I said, no!” With sheer will, she directed every fiber of strength into her arms. Energy pulsed along her muscles, firing the nerve endings, and she sucked air into her tight lungs. Releasing her breath, she shoved upward, and Malcolm toppled back. Naomi had a glimpse of the shock lighting his face before she pushed at Derek’s shoulders. When he recoiled, she took advantage of the surprise factor and scrambled off the bed.

She almost made it to the bathroom, intent on getting her dress and hightailing it out of there, but Derek caught her around the waist.

Naomi lashed out, shoving her foot against his chest with such force that Derek went hurling into the air and across the room. He landed awkwardly against the walnut bureau, blood oozing from his cheek.

While Malcolm stood motionless by the bed, watching openmouthed, Derek wiped a hand across his face. He stared at the blood-smeared hand and staggered dazedly to his feet. Naomi didn’t hang around. She grabbed her dress from the bathroom and hurried into it. Snatching up her bag, she beat a hasty retreat.

She dashed out into the empty hallway and, with her dress half-zipped, fled down the hotel stairs. The lights in the reception area were dimmed for the night, but she focused on the revolving door ahead of her. When she pushed at it, nothing happened. She gave it another shove before realizing they were probably locked for security reasons. Glancing in the direction of the reception desk, she saw a young man hurrying toward her.

“Is everything okay?” His pale eyes were full of concern. “Can I help you with something?”

He hesitated, and Naomi considered summoning that superhuman strength she’d found upstairs to get the doors open.

“What the hell’s going on?”

Her mind buzzed, her body still trembled, but through the mayhem of it all, she recognized the voice from behind her. She took a moment to center herself, to find a degree of balance, which bordered on impossible as memories slammed into her.

Naomi had spent the past decade well over a hundred miles away from him, and during the months she’d been back in Bodmin had managed to largely avoid him. Now he decided to show up at the lowest point in her existence. Well, not the lowest, but she wasn’t going there right then, and certainly not with him looming beside her.

She turned, her hands trembling around the strap of her bag, and met his piercing emerald gaze. It had haunted her for so long, the devastating hue of it. But now, facing it again, her heart trembled.

“I just need to leave.” She swallowed before addressing the young porter. “Can you please open the door?”

His concerned gaze slid over her short black dress as, she imagined, did Tynan’s. “Are you sure everything’s all right, miss?”

“Brandy,” Tynan said to the porter. “Double, I think.”

Before Naomi could object, the young man nodded and slipped away. Tynan took her arm and headed for a nearby chair. She tried to shake him off. She’d had quite enough of being manhandled for one bloody evening.

“I don’t want brandy. I just want to leave. I’ve had a crappy night.”

Still with his hand on her arm, he swung her half around so her back was to him. “Is that why your dress is unzipped?”

She took the inference. “It’s none of your business.”

“If you’re sleeping with a sleazebag who throws you out in the middle of the night before letting you get dressed, I’m making it my business.”

He zipped her dress, then plunked her down on the chair and pulled another one close so he could sit facing her. His knees bumped hers.

The contact shot a wave of longing through her. “All I want is to get out of here. And what are you doing skulking around hotel lobbies in the middle of the night? Doesn’t high-tech hacking keep you busy enough?”

Seeing as she’d had more than enough excitement for one night, Naomi found it hard to agree.

The porter came back with brandy, hovering over her like a mother hen while she dutifully sipped at it. At Tynan’s nod, he moved away back to the reception desk and left them alone in the dimly lit hall.

“Want to tell me about it?”

She peered at him through narrowed eyes. “No.”

Tynan kept a steady focus on her, almost as if he could see right down to her very soul. She remembered that look. She hated it.

He asked the question so quietly, so gently, her eyes filled and she turned away. She was coming down, all that adrenaline leveling out and leaving her raw, exposed. She’d felt that way once before with Tynan, a long time ago. She hated that too.

Faye Avalon enjoys writing sexy stories about strong men and the savvy women who rock their world. She has taken a roundabout journey toward her writing career, working as cabin crew, detouring into property development, public relations and education, before finally finding her passion: writing spicy romantic fiction.

Faye lives with her super-ace husband and one beloved, ridiculously spoiled dog. They regularly expand their family by boarding puppies destined to become guide dogs. Between writing, reading, running around after manic puppies and grabbing some quality time with her husband, Faye enjoys a challenging yoga session or a night at the movies.