New Release! Only a Good Man Will Do Book 1 of the Good Man Series by Dee S. Knight (@DeeSKnight) 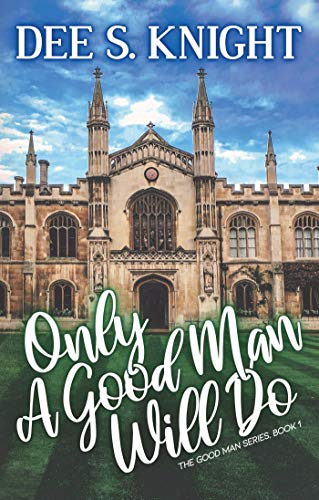 Daniel Goodman is one of a set of triplets—natural, identical triplets, a rare kind of birth. He is a serious man, often feeling estranged from his wild and carefree brother Jonah and his free-spirited parents. He’s also distanced from his other brother Mark, a genius who might or might not realize that he’s unlike most other people and doesn’t seem to care.

Daniel Goodman is a man on a mission. For years he has striven for perfection, fighting for the pinnacle achievement in his world of academia, Headmaster of Westover Academy. Westover, established before the American Revolution, is still one of the most prestigious schools in the country. They accept only boys whose parents fit a certain mold and only those teachers who hold to a stringent set of mores, on and off campus. Jonah considers his brother a prig. Daniel sees himself as doing his best to serve his students. How much better can he serve them as headmaster? That is what he seeks to find out.

Suddenly, into his cut and dried, strictly black and white life of moral and upright behavior, comes Eve Star, formerly one of Europe’s foremost exotic dancers. Her life is anything but cut and dried, black and white. Bad enough that she’s enrolled her son in Westover Academy under false pretenses. More, she runs the town’s most disreputable bar. Worst, much to Daniel’s dismay, he finds himself drawn to her like a kid to chocolate. Nothing good can come of this attraction. Or can it? He is after all, a good man.

Daniel walked into the parlor of the headmaster’s house Saturday afternoon seeking first the food table and second, his friend, Stan Baxter. He spotted them both near the front window.

“Lots of people wanted to chat.” Parents’ Weekend, when teachers sat in their classrooms to meet their students’ mothers and fathers, meant mandatory tea afterwards for all professionals at the Academy. Board members and parents attended at their own discretion, and the boys—the reason the school existed and they were all there—mostly stayed out of sight and hearing.

“Fortunately for me, a good many parents now have grabbed their progeny and left campus, so I have access to the snacks unimpeded,” Daniel said, examining the finger food on display before making his selections. The challenge was always how to load his plate while appearing to take a socially acceptable portion. “Did I miss anything?”

“Only an angel.” Stan turned toward the window.. “Holy Mother! Look at that,” he muttered.

“What?” Daniel asked, fitting a cucumber sandwich beside the smoked salmon-topped cracker on his dessert plate. “Am I missing a table of fare? I swear, every year the offerings at these teas are more meager than the last.”

Stan chuckled and answered in the same low voice, “Is your stomach all you think about? I was talking about another kind of dish. One you can have fun eating in bed, if you catch my drift. And she just slipped out onto the lawn.”

“Is your libido all you think about?” Daniel bit a carrot stick in two and sighed. Only three more hours and he could order a pizza. With all of his charges gone from the dormitory for Parents’ Weekend, he had a rare, private, two-day holiday ahead of him. With the tiny plate full, he joined Stan at the large windows. “Where is this goddess?”

“There. In the red dress and hat.”

Daniel saw nothing but the shapely form of a woman walking away. Slender ankles topped three inch heels. A dress of some kind of lustrous material hit her mid-calf. The style was soft and feminine, and berry red. Not many women showed up at Westover in a color sure to make them the focus of attention. Not that most of them didn’t expect to be the focus—didn’t demand it, in fact—but they usually weren’t so obvious. The breeze at her back molded the material to the curves of her hips and ass, and fluttered the dress’s full sleeves. A wide-brimmed hat hid her hair, but based on what was visible, Daniel easily imagined a long column of neck designed for kissing.

“If the rest of her matches the back view, you’ve got reason to be drooling down the front of your gown.”

Frowning, Stan glanced down as though to make sure the drool comment was only facetious. “Can’t afford to drool on this. I had to use my tax refund to pay for the thing and show off my Master’s chevrons. I don’t know how you afforded to pay for your Ph.D. paraphernalia.”

“The new degree looks sharp on you. Now, why are you mooning over a woman you see at the headmaster’s tea, when you know she’s some student’s mother and off limits?”

“She looks young enough to be a sister, so it’s not a given she’s out of bounds.”

At that moment, a young boy wearing the school uniform and a big grin ran up to the woman. She bent to catch him in her arms. When she straightened, she ruffled the boy’s hair. His expression and his wagging finger showed that he chastised her, but then he laughed and finger-combed the mussed hair back into place. She took his hand and they walked toward the circle where most of the parents parked. Looking up at the woman, the boy’s lips moved the whole while, carrying on a steady monologue.

Something in her actions captured Daniel’s attention. They were artless, performed naturally and with unabashed love. The child fairly skipped beside her and the frequent turns of her head showed she looked at him as though hanging on every word he spoke.

“How wonderful,” Daniel murmured, impressed with her total attention to the boy. “Did you see that?”

“Oh, yeah. I didn’t think her hips would ever stop swaying, and it’s a crime they make hemlines so long.”

Daniel laughed. “You’re such a hedonist.”

“And proud of it. But you were right. Looks like she’s a student’s mother after all. Damn the luck.”

For once, Daniel agreed with his friend. But not just because of the woman’s obvious good figure. More because she seemed to love her son and didn’t care who knew it. He normally kept his distance from flashy women, as this one appeared to be, based on her dress color, but her easy manner with the boy would be enough to make him ignore his own inclination toward the conservative. If she weren’t also a patron of the school. Assuming the gods smiled on him and he became headmaster, he and the woman would be on business terms, and nothing good ever came from mixing business with pleasure. Pleasure is what every male instinct in him screamed she would be.

A few years ago, Dee S. Knight began writing, making getting up in the morning fun. During the day, her characters killed people, fell in love, became drunk with power, or sober with responsibility. And they had sex, lots of sex. Writing was so much fun Dee decided to keep at it. That’s how she spends her days. Her nights? Well, she’s lucky that her dream man, childhood sweetheart, and long-time hubby are all the same guy, and nights are their secret. For romance ranging from sweet to historical, contemporary to paranormal and more join Dee on Nomad Authors. Contact Dee at dsknight@deesknight.com.