New Release: Beast in Me – Book 2 of the Divination Falls Trilogy by Sommer Marsden 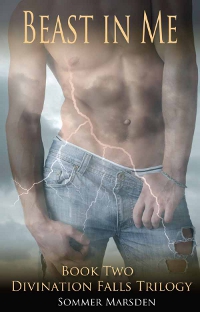 Weather worker Cameron Bale rolls into Divination Falls after being prompted by Spirit and Brother Lighting. He discovers that the small, hidden town full of shifters and magical types is suffering a series of unsettling events. There’s speculation from the town seers that he could be the answer they’ve been looking for. Cameron’s willing to try and help: he’s got nowhere to go and nothing to lose. His life is simply about loneliness and it turns out that Trace, a grumpy wolf with stunning eyes, knows just what that feels like. Cam finds himself wishing maybe they could be alone … together. Oh yeah, and battle whatever evil it is that still lurks in Divination Falls.

A dragonfly zipped past and Cam watched it go. What next? Bluebirds and butterflies and singing cartoon woodland animals? It was all too nice, too perfect … Surreal.

‘You OK?’ The voice was deep and dark and full of secrets. That was his first impression.

Cameron jumped, clutched at his pounding chest. Inside his heart was going berserk and he felt a little lightheaded with it.

‘I was. Jesus Christ, you scared me.’

Trace grinned with half his mouth. Somehow that little smirk made Cameron think of the big bad wolf. Made him flash back to that body sprawled, lean and powerful, over a small, lumpy bed. Made him remember one of those huge hands on a powerful, hard cock. He licked his lips.

‘Careful, lightning rider. I can smell your emotions.’ Then the wolf chuckled, bending to tie his work boot.

‘I – I’m sorry I spied on you.’ It was all Cameron could think to say.

Trace shrugged. Cameron watched his big shoulders flex with power. He was stunning with his huge body, big, fat attitude, and purple eyes. Just being so close to him made Cameron feel slow-witted and thick-tongued.

‘It was the most excitement I’ve had in ages,’ the wolf said and started to walk.

Cameron watched him go off, his heart sinking. He wanted the man to take his apology seriously. He also admitted to himself he wanted to be close to the wolf. There was no hope of anything happening between them. There was very little hope of anything happening for Cam with anyone. He’d come to terms with that long ago. But still, he could just be near Trace. Remembering the sight of his body and the sound of his voice just outside Cam’s barricaded bedroom door as he brought himself off.

Wolf at the door, he thought, and then shook it off.

Fifty feet away, Trace stopped, and Cameron felt his spine go rigid, his pulse pick up. The man turned to him and shielded his eyes from a bright beam of sunlight between the thick tree branches. ‘You gonna stand there all day admiring my ass, or are you coming?’

Cameron blinked, feeling a wild urge to laugh but pushing it away. ‘Yes! Right!’ he called, bouncing on his toes like one of those perky, hyper dogs. He blushed, but refused to let himself feel silly or embarrassed. He very much wanted to go along.

He hurried along the path until he was almost even with the wolf. Then Trace turned and continued to walk, Cameron right on his heels.

‘Why are you here?’ Trace asked.

The question stunned Cameron but he swallowed hard and tried to focus enough to answer. ‘Good question. I … work with weather. Lightning to be specific. I guess the best way to put it is I was nudged here.’

‘Like with voltage?’ Trace asked with a gruff laugh.

‘Yeah. Sadly, I do get nudged with voltage.’

The wolf turned those deep purple eyes on Cameron and said, ‘What for? What’s here?’

Trace cocked his head, giving a half grin. ‘Hello?’

‘Sorry! I was just looking –’ He flushed, caught in the act. ‘Your eyes, they’re amazing.’

That closed the bigger man down. He’d had a nice amused and open expression on his handsome face and that fast, it shut down like someone turning the lights off in an empty house. ‘Thanks. I guess. They’re the product of a very bad infection when I was a kid.’ He turned on his heels and kept walking without further explanation.

Cameron had to force himself to swallow. He had just complimented the first man he’d lusted after in goodness knew how many years on some sort of mutation? Something that clearly upset him when discussed. Good going, dumbass!

Cameron hurried along the patch, ducking reaching branches and praying there was no poison ivy to be found here in Divination Falls. ‘I’m sorry! I didn’t know. And I don’t know what’s here. Or why I am,’ he gasped, finally catching up.

The wolf shrugged. He shot Cameron a sideways glance and said, ‘Why would you know what’s here?’ He stopped fast and Cam found himself almost crying out from the sudden shift in motion. ‘As for why you’re here, how could you not know that?’

‘I never really know until it’s revealed,’ Cameron said. He kept his gaze pinned at Trace’s chin so he wouldn’t get mesmerized by those stunning eyes that clearly upset the custodian.

‘Was it me, maybe?’ Trace asked, his lips twisting into a grin. ‘Was it secretly watching me jack off? Was that your big mission?’ He took a step toward Cameron which forced the lightning rider to step back. Or get crushed against an angry wolf.

‘I’m sorry,’ Cam breathed. ‘It wasn’t my intention and then I couldn’t …’ He shook his head. His skin was tingling and he wondered if he was going to get struck. Or worse yet, if Trace would strike him. ‘You might want to step back,’ he said without thinking.

‘Why is that?’ the wolf asked, taking a step forward. ‘Am I invading your space?’

‘I get it,’ Cam stammered. ‘I invaded your privacy. I’m no better than a pervert. I know! But you could get …’

The wind kicked up. It often did when he was frightened or excited and his blood leapt in his veins and his heart beat fast with arousal. His last lover had been zinged by energy one too many times and when some of his hair had actually caught fire, he’d bailed. Calling Cameron a freak in the process. Cam wasn’t up for either Trace being hurt or thinking him a freak.

‘I might get what? And it’s OK – you invaded my privacy, now give me an excuse to invade yours.’ He pushed his face closer and Cameron caught a flickering of animal shine in the man’s eyes. They turned golden around the very iris and a fast, steady pulse beat at the base of Trace’s neck. When he took Cameron’s wrist in his big hand and squeezed, Cam felt the air rush out of him. His cock pressed eagerly to his jeans and he tried his best to focus on something – anything! – besides the wolf so maybe his hard-on would abate. No such luck because Trace took his warm hand and very briefly cupped the evidence of arousal in Cam’s pants. ‘Looks like you’re still a bit worked up from last night.’

‘You were watching me in wolf form.’

‘You heard me.’ It wasn’t a question. Very briefly, Cam wished for Trace to put his hand back. To touch him.

‘I did. I also smelled you and tasted you on the wind. Do you know when you come your breath does this shuddery little sigh thing?’