My Angels are Such Jerks – A Guest Post by Janine Ashbless

“What more dangerous attribute could you possibly inflict upon a being of vast power than testosterone?”

–In Bonds of the Earth

I thought I’d cut it back to basics. My source material for the trilogy is the Bible and The Book of Enoch—which was basically ancient Jewish fanfic based on Genesis Chapter 6. 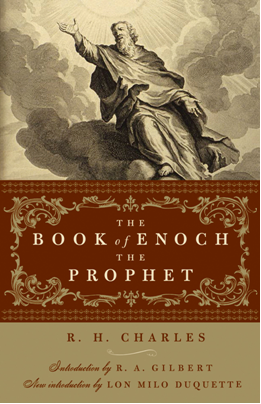 I established in CHWD that angels aren’t naturally human in form—they took human shape in prehistory to interact with us. What did they look like as spirits? Here’s a clue – the word Seraphim (“burning ones”) is mostly used in the Old Testament to mean poisonous serpents! So my angels are at the root of worldwide dragon mythology.

Having taken physical human form they found themselves unexpectedly loaded with human instincts and emotions: aggression, lust, an urge for independence, romantic love, anger, physical pleasure and emotional pain. It was all very hard for them to cope with! My angels have big emotions. These can seem almost childishly simple. They need love above all, and if cut off from the Love of God they have to have human love to sustain their lives. But they never had to navigate the complexities of growing up, so they have no subconscious insecurities or mixed feelings or social conditioning as to boundaries. No emotional intelligence, in fact.

Some stayed in human shape, took human lovers and Fell from Divine Favor; they taught humanity all sorts of stuff we weren’t supposed to know like magic and metalworking. Oh, and the women they slept with became what the Book of Enoch calls “sirens”— so that happens slowly to my heroine Milja too. The first sign is when she finds she can’t cry…

Not one of my fallen angels is what I’d call evil (not even Satan, who has a complex hidden agenda that Milja is starting to recognize in IBotE). But even the ones with the best intentions are the last word in entitlement. My fallen angels have been imprisoned since the Bronze Age. Human civilization and culture have changed beyond anything they could have imagined, and when they are freed they struggle to catch up. Sexual consent is a novel concept. “Human Rights” is pretty much beyond their grasp—why should humans, or anything, have rights?

So my fallen angel Azazel struggles desperately with his relationship with Milja, though he loves her crazily. She keeps asking him not to kill people, even when trying to protect her—Weird! She wants him to be monogamous, and he’s all, “Well I don’t see the point but if it makes you happy…” Which is fine until he realizes that she’s also in love with a human man. If there’s one thing that flips Azazel’s switches to rage, it’s hypocrisy…

I do love my confused, demanding, arrogant, hot-hearted angels. I just wouldn’t want to meet one! 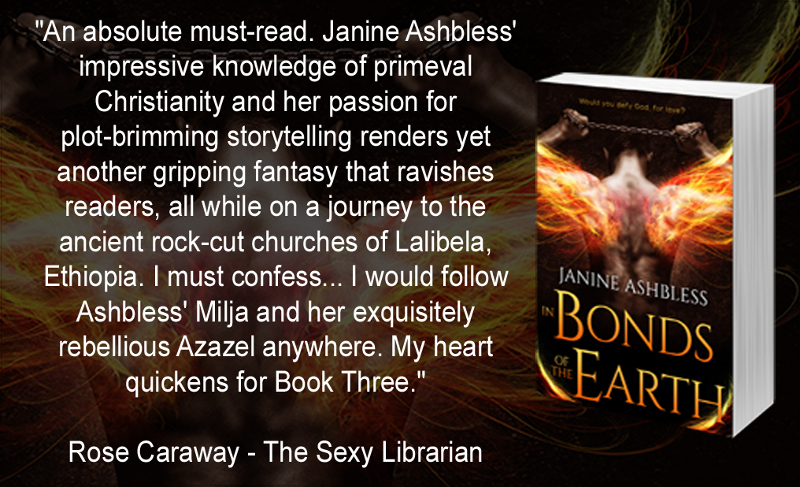 Wrapping the cheap cotton throw from the foot of the bed around my bare body, I padded through to the doorway. The Archangel Michael stood in the middle of my small apartment, looking about him at the book shelves and the pictures. A paperback copy of The Girl with the Dragon Tattoo slipped from his hand back onto the low table.

“Hello, Milja. Nice place. Has he moved his toothbrush in yet?”

It was like waking to find a giant bird of prey in my tiny living room; he looked wildly unsuited to a domestic setting and way too big for it, even with wings furled. In fact, with that Roman nose and those unblinking amber eyes, there was something distinctly golden eagle-like about him. If he stretched out he could knock over walls, I thought.

“What do you think you’re doing?” I asked. “This is my home. You can’t just come barging in!”

“You’re right,” he said, looking startled. “I have to have your permission. No, hold on, wait…that’s vampires. Shame.”

I pursed my lips. “Well, God certainly did not hold back on the sarcasm when he made you guys.”

He smirked. If you’re that good-looking, even a less-than-warm smile can be a weapon of devastating charm. Turning to the couch, he sat down with arms draped over the back and knees spread. It was not so much an invitation as a claiming of territory.

“What do you want?” I kept my voice hard, even as I thought of the icon of Saint Michael that had stood guard over the key in my father’s church. That holy painting had always made me feel nervous as a child, and he was no less intimidating in the flesh. His piercing gaze rested lightly upon me, with all the gentleness of a sword-point.

His rigger boots were caked in dried mud, I noticed, and flaking on my rug. I wished he would blink. It still creeped me out, even though Azazel should have inured me to it. “Angels aren’t supposed to lie. What are you doing here?”

“So, what…you’re sitting guard over me until Azazel comes back? Is that your plan?”

“He’s too much of a coward to face me. Runs every time.”

“If that’s the way you want to call it.”

He looked at the kitchen door. “I see you have a kettle. You got any tea? I like that Earl Grey stuff. Tastes like flowers.”

“I know the rules, you know. You can’t actually do anything to me.”

“True enough. And I’m not stopping you leaving, if that’s worrying you.”

“That’s fine, I’ll find you. This apartment’s a bit small for the two of us, to be honest.”

I clenched my jaw, weighing my options. “Okay,” I said, and dropped my wrap to reveal my naked body, in all its post-coital salty glow.

That wiped the smile off his lips. “Don’t play those games,” he growled, sitting up and looking away from me.

Love is Azazel’s weak spot. Shame is theirs. They’re terrified of their own human flesh.

“What? Does this make you uncomfortable? That’s a pity, seeing as how it’s my house and I like to walk around it naked.”

“You are shameless.” His gaze was sliding all over the place, not daring to settle on me.

“I’ve got nothing to be ashamed of.” I hefted my breasts and jiggled them. “They’re my tits. In my apartment. If you don’t want to see, clear out.”

“Put your robe back on,” he rasped.

“Oops,” I said. “Did I drop it?” Turning my back to him, I spread my feet and, straight-legged, bent over to pick the fabric up again. Nice and slow…

He moved so fast he’d launched me across the room and onto my bed before I even realized he was out of his seat. The abused mattress twanged in alarm. It knocked the wind out of me—and more than that, shocked me half to death. I wasn’t in the least bit hurt, not even bruised, but I hadn’t expected him to touch me at all, under the rules. Maybe the Boatman sailed closer to the wind than I’d bargained for.

“Don’t do that, whore!” he barked, leaning into my face. He looked furious. I knew why. It takes a human decades to learn how to deal with all the things that come with an adult body—all those hormones and instincts—without losing control. Angels never had the advantage of a gradual introduction.

I had two choices: surrender or fight. I bared my teeth and snarled right back at him, matching his rage and contempt. “Or what? You’re going to rape me? ’Cause I think that might just count as a fall from Grace, don’t you? And then you’d be royally fucked, Mister Michael.”

“Wanna watch?” I asked, spreading my legs wide. “Because that’s what us girls do when we’re home alone these modern days. You can go into the other room if it squicks you out to see. Then you’ll only have to listen to the noises I make.”

He turned on his heel and stomped away, slamming his hands into the doorframe hard enough to crack the wood. But he didn’t leave altogether. He was just that bit too stubborn. 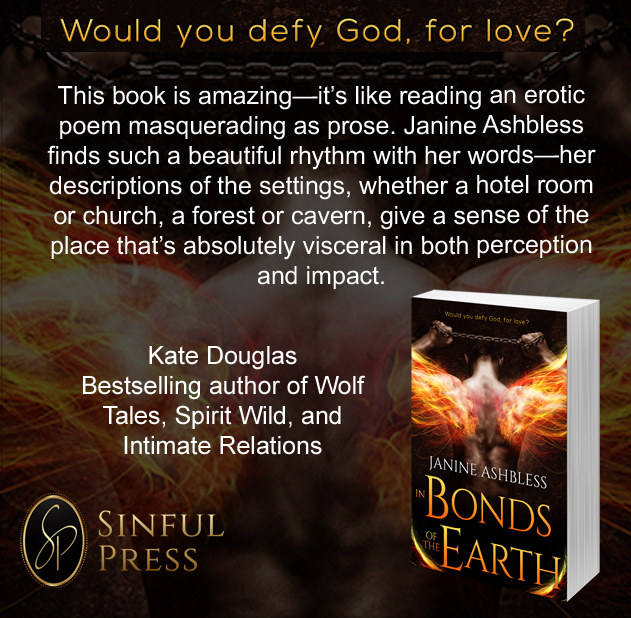 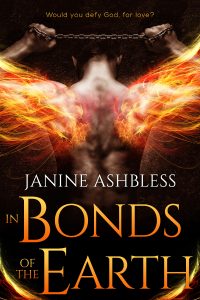 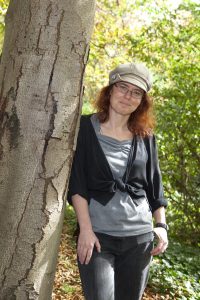 Buyer beware! If you like dark romance and a hard-won Happily Ever After, try “Cover Him with Darkness,” “Heart of Flame,” or “The King’s Viper.” If you prefer challenging erotica, go for “Red Grow the Roses” or “Named and Shamed” instead. All her other books lie somewhere on the spectrum between.

“Hardcore and literate” (Madeline Moore) and “Vivid and tempestuous and dangerous, and bursting with sacrifice, death and love.” (Portia Da Costa).

Make sure to follow the whole tour—the more posts you visit throughout, the more chances you’ll get to enter the giveaway. The tour dates are here: http://writermarketing.co.uk/prpromotion/blog-tours/currently-on-tour/janine-ashbless-3/