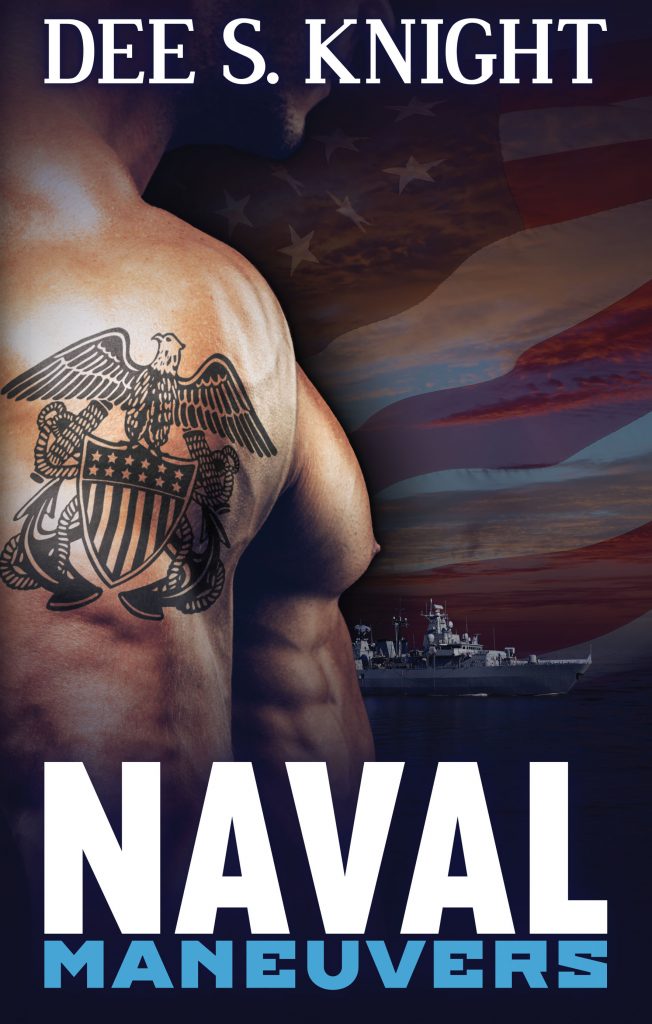 Men and women of the armed forces experience desire and love pretty much like everyone else. Except, well, there is that uniform. And the hard-to-resist attraction of “duty, honor, service” as a man might apply them to a woman’s pleasure. All things considered, romance among the military is a pretty sexy, compelling force for which you’d better be armed, whether weighing anchor and moving forward into desire, dropping anchor and staying put for passion, or setting a course for renewed love with anchor home.

Individual blurbs: (the book is in three parts)

Weighing Anchor (allowing a ship to move forward by retrieving the anchor): A professional woman sworn to avoiding all things military finds herself in love with a lieutenant commander in the Navy. Love won’t conquer all if she allows her childhood memories to eclipse future happiness.

Dropping Anchor (securing movement by dropping the anchor): Two people find (surprisingly) that they are both in the Navy and love their chosen professions—until one turns out to be an officer but not a gentleman and the other is a gentleman but not an officer.

Anchor Home (safe, smooth sailing): When two former lovers find each other after more than a decade, will a long-hidden secret threaten the course of a rekindled romance or be the cause of it?

“And what is your name, pretty?” Mel Crandall addressed the dinosaur bones in an undertone, bending nearly to face level. The skeleton displayed an open mouth and rows of fierce, sharp teeth.

“Roger,” a man standing next to her said in a low voice. Startled, she looked up. Up being the operative word. She stood a decent five feet ten inches, and he beat her by a good half foot. She studied him. He ignored her.

The guy had a solid profile, strong chin, chiseled cheekbones, and a straight back with muscular shoulders. Short brown hair. He wore glasses and stared straight ahead, but glasses couldn’t disguise the laugh lines that radiated from the corners of his eyes. His posture was near perfect and he was not overweight, as evidenced by the trim fit of his jeans and red polo shirt that clung enough to give evidence of a low body/mass index number.

As a doctor, she immediately noticed body characteristics before actual looks. But with this guy, examination in lieu of admiration was hard. Men were often put off by the fact that she paid attention to whether they looked sallow or flushed, or if their hands were cold or warm before she “saw” them. She noticed if a man’s eyes were dilated or glittered with fever before she registered eye color. Dates started with mini examinations before she relaxed enough to enjoy personalities, but that’s just the way she was. Men had to take it or leave it. Sadly, most left it. Which was why she talked to dinosaurs at the Smithsonian Museum of Natural History all on her own.

Mel moved on to the next exhibit, a shorter built specimen but still tall and with a nasty spiked tail. “I wonder what you looked like,” she murmured. “What color were you, what did you eat, and what’s your name?” She bent to read the exhibit information.

“Gray. Grass.” That same guy had followed her. Rather than having a strong profile, she was beginning to think he was a weirdo. “Annnd, roger.”

Quickly, Mel moved to the next exhibit. “And you are–”

He stood beside her again! Mel started to look for a museum guard but saw none. Great. Planting her hands on her hips, she turned to him. “Stop following me,” she said loudly enough that people in the general area turned to see what was happening.

Hold it? Hold it, as in “Wait a minute, little lady?” She opened her mouth to lay into him when he turned and removed his glasses, showing her the richest, most chocolatey brown eyes she’d ever seen. The words stuck in her mouth.

In a lower voice she said, “You’re following me from exhibit to exhibit and talking to me. I want you to stop.”

“I didn’t realize…” He wiggled the glasses at her. “I’m working here and I’m afraid I didn’t notice you.”

Well. What was worse, that he was a pervert following her place to place, or that he wasn’t a perv and hadn’t even noticed her?

His brow furrowed while he studied her. “Yes. Yes.” Then he shook his head. “Roger.”

Again with that Roger.

“Gotta go. Later.” Then he smiled at her. “Just a minute, okay?” He folded the glasses and put them first in a protective case. Squatting, he placed a briefcase on the floor and opened it. He stored the glass case inside a pocket. Then he removed something from his right ear—an earbud?—protected it and also put it in the case.

Mel watched all of this with curiosity. He expected her to wait for him? What arrogance. And yet, wait she did. When he stood, holding the case in his left hand and smiled once more, her heart stuttered. The guy was drop dead gorgeous—at least to her understanding of the word. Normally, she appreciated the male form, mostly from a medical viewpoint. This man she enjoyed with pure pleasure.

“I’m sorry,” she said. “I thought you were…” She slid her hand between the two of them and then to the exhibits.

“No,” he said. “I apologize. I shouldn’t be testing this stuff around people. The last time I did it a kid thought I was calling him Roger.” His voice had a soft drawl to it. Western Virginia or North Carolina, maybe? Somewhere in the mountains. It felt like a cool stream as it ran over a body hot and tired from hiking: refreshing and invigorating, at the same time soothing and relaxing. She wanted him to talk more.

Stop that! She laughed. “I thought you were naming each dinosaur.” He smiled and dimples indented his cheeks. His eyes crinkled and Mel’s breath caught. This guy should come with a warning label. Approach with caution. Could bring on lustful intentions and ultimately, broken hearts. Take only in small doses and in public places.

He held out his hand. “David Stimson.”

She took it gingerly, half expecting lightning to bolt between them. Nope. Nothing. So much for romance novels. He had a nice hand, large and warm with healthy pink nails, and she grasped it firmly. “Melissa Crandall.”

“Nice to meet you. Do you mind if I wander along with you?” Grasping the briefcase with his left hand, he deftly, he moved to the left of her.

“No, please. It’s a free country.” She walked to the next dinosaur re-creation. “And this one is…” She half waited for his pronouncement.

“Not Roger,” he said, stopping her heart with that killer smile again. He leaned over to read the information. “Torosaurus latus. It says here that these bones were dug up in North Dakota, but that the Torosaurus roamed from Canada to Texas, and that he had the biggest head of any land mammal.”

“Well, I guess that’s something to be proud of,” Mel responded. David laughed and she found herself smiling back. When she moved to the next exhibit, he strolled along with her, hands behind his back.

He pointed to the next specimen. “Poor guy. Starved to death.”