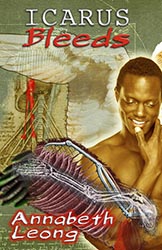 Icarus, a man on the run, dreams of wings, and of taking flight like the surgically modified rich and famous of Central City. The hacker who harbors him will do anything to keep him, including paying for the dangerous operation in a back alley chop shop. Neither can imagine how much the wings will truly cost.  (M/M)

Forbidden Fiction’s Story Page (includes links to all sites where the title is available): http://forbidden-fiction.com/library/story/AL1-1.000140

I will call him Icarus, because he worked so hard to erase his birth name that I will not commit the sin of returning it to him now. The things I said and did when I knew him will only make sense if you understand how beautiful he was, so I will try to force the words of mortals to describe a man who never seemed to belong to earth at all.

Icarus first came to me in the dark, in the rain, passing out of the shadows falling over the street, slipping smoothly into the shadows I made for myself. His eyes glowed from the corner where he took a seat, huddled under shelves loaded with discarded computer equipment. Even then I wondered how a shadow could be so luminous within a shadow, how black could shimmer from within black.

I wasn’t in the habit of looking at my clients. They came because they wanted to be forgotten, and they generally did not want to be seen either. I could not help myself with Icarus. He reminded me of flesh I liked to pretend I didn’t have. Eyes, lips, fingertips, inner thighs, the sides of my stomach, the soles of my feet. And, yes. Tongue. Cock. Thoughts both crude and poetic competed to distract me from the mechanical process of obscuring someone from all the files and IP addresses that affirmed that person’s existence.

I avoided looking at his skin, a lighter shade of what is called black than my own purple-tinged pigment. Icarus’s brand of black flowed with honey, shone with sunlight, glittered with the gold that may once have belonged to Pharaoh. Long, thin fingers, delicate as a girl’s. Red-gold palms, and the beginnings of a scar, a telltale revelation of a story that started in the hands and parted the flesh of the forearm nearly to the elbow.

He saw me looking, and pulled the sleeves of his sweater down low, clutching bunches of the material in clenched fists. “Can you really make me disappear?”

I snorted. “Of course not. Not these days, not with the backups they keep and the triple cross checks they have to avoid failure conditions. Best I can do is make them forget to look for you.”

He nodded, the gesture emphasizing the length of his neck, the quality of his silence. “How much?”

He shrank back from me, receding into the forest of parts and cords. “I’m not looking for favors.”

“I don’t do favors. I do a sliding scale. You pay what you can afford to pay. What you think is fair. I trust you.”

I sighed. No one ever understood this when I bothered to explain. “Because I’m not one of them. I don’t want to act like one.”

He swallowed, his Adam’s apple moving gracefully up and down in that impossibly lean neck. “I was going to see what you would take.” He bit his lip and didn’t explicate, but I got an idea of what he’d had in mind by the way his hands crept toward his fly, the gesture so subtle that I wasn’t sure it had been a conscious invitation.

On any other night, with any other man, I wouldn’t have. I would have kissed that smooth, wide forehead, done my work for free, and sent him back into the street uttering the vague promise that someday, when he could, he would take care of me. With Icarus, I could not resist the offer. I had to keep him a little longer. Though I hated myself for it, the sentence passed my lips as if it made up part of my daily stock in trade. “After I finish, you’ll come upstairs with me.”

His bowed head telegraphed his acquiescence well before his soft words. “Thank you.”

When I got him to my bed, I knew I should be the one thanking him. He stripped with a benevolent dignity that shamed me. I felt as if I’d brought the Virgin Mary to my room to make a whore of her. Again, I considered releasing him, leaving my work to be my offering to his present and future beauty.

Then his undershirt peeled away from smooth, hard abs, and his boxers fell away from his hips and the thick, dark cock that hung soft between his legs. The shy and lovely young man before me, with his incandescent eyes and visible ribs, brought my own cock surging to life. I could not let him go. My desire made me cruel.

“Get on your knees and crawl to me,” I whispered, loosening my own clothing, casting it aside. Hurt flashed through his eyes, and I loved it for the confirmation that it offered. He was open to me. I could touch him. I could make him remember me forever.