Hello everyone, and thank you KD Grace for hosting me on my blog tour with my Christmas Story, For The Love Of Mutt.

Yesterday I shared how my heroine popped into my head. If you missed it, click here. Today it’s Mutt’s turn. I had come across a picture of a Tamaskan dog ages ago, and at the time I thought to myself, hmm, now that would make a good premise for a shifter. 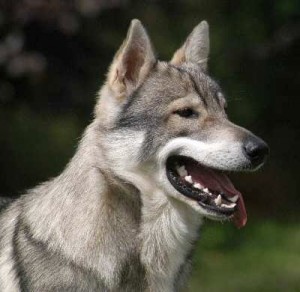 They look very much like wolves, as you can see. So much so that it fitted my vague ideas for this story perfectly. What better way to hide in plain sight than as a dog. And not just any dog either.  No, Ethan (Mutt) is at the shelter for reasons of his own. You will have to read the story to find out what those are, but he is so not what he seems.

Join me on tomorrow’s stop, where I’ll share the visual inspiration for Ethan, and he is all kinds of yummy 😉

For now I leave you with a little excerpt of when we first meet Mutt in the story. He’s not very happy as you will see…

Anja’s soft, small hands curled into his fur, her hot tears scalded his skin, and Ethan growled his annoyance. He’d have liked nothing better than to tear that sorry excuse of a human male limb from limb. As satisfying as that would have been, he’d come to his senses mid-leap and angled himself away from the motherfucking bastard, earning himself a humdinger of a kick to his ribs. Temporarily winded, he was spared from further injury by Anja’s intervention and it meant Declan would live—for now. However, if Anja didn’t stop crying soon, Ethan would not be able to hold his wolf side back for long.

The cover of the Tamaskan dog served him well, but he was and always would be a wolf, and as such, every one of his senses had kicked in to protect the fragile woman whose scent had held him in thrall from the first minute she’d stumbled upon him outside the shelter. Hurt after a run-in with a gang of youths whose burglary attempt he’d interrupted, he’d sought shelter in the bin area. Anja had found him when she’d taken the trash out, and her immediate concern for his well-being had broken through all of his defensive walls in an instant.

Mary’s shelter was one of the few that allowed the homeless and their dogs in, but even Mary had balked at the suggestion that Mutt ought to be allowed in without an owner. He should have been offended at being called Mutt, but from Anja’s lips the usually derogative term sounded like a caress and he’d followed her meekly into the warmth of the shelter. He’d lost himself in the expressive jade pools of her feline eyes as she’d run her hands over his sides. She’d tucked the long tresses of her hair behind her ears in an impatient gesture he would always associate with her.

He curled himself around her now, his injured ribs already healing, and inhaled deeply. He would quite happily have stayed like this, but he needed to make sure she was okay. She clearly cared more for that bastard than she’d let on. He nudged his nose into her neck and exhaled. A shudder went through her slender frame and, encouraged by her response, he did it again until she giggled.

“Stop it, Mutt, that tickles.”

He nudged her again and showed his teeth in a wolf-like impression of a grin and her smile deepened.

“You know, sometimes you seem almost human to me, as though you understand exactly what I’m saying to you.”

He yipped once and nodded, making her laugh again. She brushed the remaining traces of her earlier tears off her cheeks and her expression sobered as she ran her hands along his flanks.

“He didn’t hurt you too much, did he? ‘Cause I swear if he did, I’ll knee him in the balls next time I see him. I knew he was a dick, but fuck it, he took that to new heights.”

“He certainly did, my dear.” Mary interrupted Anja’s quiet rant and she got to her feet. “This is none of my business, but a man with a temper like that…well you’re best off without him. I’d hate to see you get hurt, Anja. I mean, I got the impression he was a bit of a snob from what you let slip, but that was unacceptable and he is not welcome here again. We don’t need his sort around here.”

Anja’s short laugh spoke volumes, and Ethan licked her tightly curled fist in an effort to reassure her. She unclenched her hand and patted his head, causing his wolf to grin and lean into her. That animal of his was turning into a right sap, over a human no less. 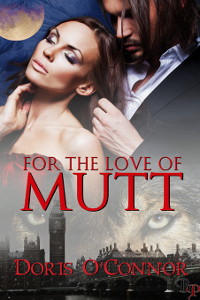 A homeless shelter at Christmas may seem an odd place to find one’s soul mate, but love knows no boundaries – or does it?

Anja has grown fond of the wolf like dog hanging around the shelter. With her soon to be ex -boyfriend putting pressure on her, her canine friend proves to be more reliable than any human could ever be. If only he were more than just a dog.

Helping others is not always easy to do, unless Ethan can do so undercover. However, hiding your true self brings problems of its own. Finding a mate had not been in Ethan’s plan of action, but Anja’s easy acceptance of Mutt breaks through all of his defenses.

The problem is he is not what he seems and will his deception by proxy prove the end of them before they even have a chance at love?

Glutton for punishment would be a good description for Doris… at least that’s what she hears on an almost daily basis when people find out that she has a brood of nine children, ranging from adult to toddler and lives happily in a far too small house, cluttered with children, pets, dust bunnies, and one very understanding and supportive husband. Domestic goddess she is not.

There is always something better to do after all, like working on the latest manuscript and trying not to scare the locals even more than usual by talking out loud to the voices in her head. Her characters tend to be pretty insistent to get their stories told, and you will find Doris burning the midnight oil on a regular basis. Only time to get any peace and quiet and besides, sleep is for wimps.

Find Doris on the web here:

I am giving away two copies of For The Love Of Mutt at the end of my blog tour.  Follow me on every stop and every comment will give you another entry into the draw—easy peazy  J

As well as the two main prices, one random commenter on each stop of my tour will receive an e-copy from my back list. Check it out here. Winners Choice!

Have a blessed festive season all of you!

The Jaybees: Kay and Steve, the Mysterious Man At Home → ← The Pleasure is all YOURS with the Sh! Christmas Pleasure Hunt!