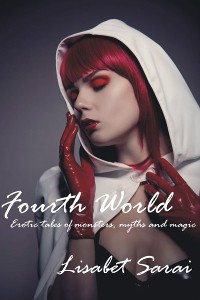 Enter the fourth world – a world of lust and shadows, where anything can happen.

Obsessive passion and dark ecstasy mark these seven stories of paranormal desire from eroticist Lisabet Sarai. An undead couple hunts for beauty and youth in the history-drenched streets of Prague. A sex addict meets his fate in the embrace of a seductive monster. An innocent writer offers her body and heart to a century-old ghost. A spiritual seeker succumbs to temptation in the arms of a fearsome and greedy goddess. A kinky, blood-drenched threesome unfolds in a luxurious Bangkok penthouse. These tales conjure the magic of sex, and its dangers. Expect to be unbearably aroused and occasionally terrified. Do not expect happily ever afters.

“Master Carl?” My eyes trained respectfully on his scuffed boots, I stand back to let him enter. The door swings shut behind him.

He fists my hair and forces me to my knees. My cock surges inside my pants.

“Don’t speak unless I ask you a question, boy. Understand?”

“Yes—yes, Sir.” I feel vaguely guilty bestowing that honorific on anyone but my true master. Keeping my gaze straight ahead, where an impressive lump distorts his worn dungarees, I catch a whiff of gasoline and old, sour sweat. His hand goes to his fly. I hold my breath, my heart slamming against my ribs.

“So you want me to cut you? That’s what you said, right?”

He peels the zipper down and hauls out his massive, uncut cock. “Suck me first. If you do a good job, maybe I’ll get out my knife.”

I have no opportunity to reply. He mashes the head of his dick against my lips, pushes them apart, and drives his rod down my throat. When I sputter and choke around the rigid plug of flesh, he draws back a bit, letting me gulp air into my lungs. Then he rams back in, but this time, I’m ready. I suck at him like a kid with an ice cream soda, swirling my tongue over his bulb and tickling the ridge beneath.

He groans a bit. His blunt fingers clutch my shoulders to hold me still while he thrusts. He’s found his rhythm now, a hard, fast plunge followed by a slower withdrawal. My lips cling to the sleek, steely bulk of him each time he retreats.

Despite the funky smell of his jeans, he tastes clean, a bit flowery, as if he used perfumed soap. I’m reminded of them—my real master and mistress—and all at once I’m on the edge of coming. I tense, knowing that’s not permitted and my abuser senses the change. He’s a serious Dom, despite his tough demeanor, attuned to his submissive’s reactions. His hesitation gives me the chance for a deep breath and the urge subsides a bit, though my cock still throbs every time he fills my mouth.

I let myself pretend that the cock I’m sucking belongs to my master. He’s longer and more slender than Carl, but I don’t doubt he’d be equally rough. Cruelty is a habit for him. Closing my eyes, I picture him looming over me, his raven curls tumbling over his brow, his lips stretched in a taut grimace of pleasure. I’ve never tasted him, never touched him, but I know his skin would be cool and silky. His cock would be hard as a marble tomb.

Now that I’ve grown up, I create my own tales of wonder, weaving in generous portions of human desire with its potent enchantments. Lust and power—terror and ecstasy—my paranormal stories will make you believe in magick.