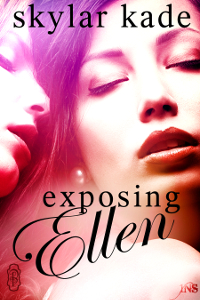 Ellen Porter is a stranger to the single life–as much a stranger as she is to facing her same-sex desires. The recent divorcee, desperate to prove that her attraction to women is just a phase, enlists the help of Madame Eve for one night of “getting it out of her system.”

Aimee Tran has had enough of the Los Angeles bar-hopping scene. In pursuit of a genuine romantic connection, she discovers Madame Eve and decides that maybe, just maybe, a one-night stand will tide her over until she finds The One.

Neither woman expects lust to burn down their preconceived notions—or to crave more than one desperate tryst.

“I….” She shook her head, terrified of the eagerness building inside her. “I have no idea what I’m doing,” she eventually whispered. “I’m sorry. Contacting 1NightStand was a bad idea, not fair to you at all.” Paolo might have been right. Her broken marriage was her fault.

She moved out of the balcony doorway but gentle fingers settled on her shoulders. “Not so fast, hon.” Aimee’s voice pitched low. “It’s not like I know what I’m doing either. I’ve never called up Madame Eve before.”

Ellen stared out over the ocean, where her date’s beauty didn’t distract her and she didn’t have to see the condemnation in Aimee’s eyes. “It’s more than being new to a dating service.” She paused and swallowed around her embarrassment. Neither in her mother’s house nor her husband’s had she been encouraged to talk about intimate issues. She hadn’t even heard certain anatomical euphemisms spoken out loud until her husband’s mistress ended up in their bed. Still, she forged on—Aimee deserved an explanation. “I’ve only been with a woman once, kind of. You obviously know what you’re doing and it’s not fair to you to be stuck for a night with someone who—”

Aimee spun her around, pulled her close, and twisted her fingers through Ellen’s hair. “Am I imagining your arousal?”

Oh, Lord. Her lips parted. The other woman stood so near. Her tongue flicked across Ellen’s lips and she bit off a moan. “I—”

Aimee pressed closer until their breasts squished together. One of her legs slid between Ellen’s. “Am I imagining your little gasps of pleasure? Of desire?” She bit Ellen’s earlobe. “If I am, tell me to leave. Because, honey, right now your inexperience is turning me on.”