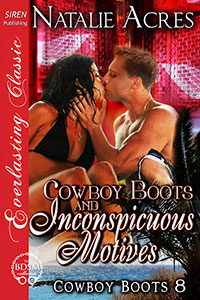 Sydney Donovan is her husband’s whole world. Now his enemies know what it will take to bring one powerful man to his very knees.

She put an entire organization at risk.

Sydney’s need for independence places her in enormous danger. Now, the Underground Unit teams are facing an unknown enemy in order to save her life.

He is fully prepared to meet their demands.

Sydney understands what’s at stake. The authority’s enemies have banded together and they want Brock to trade his life for hers.

His adversaries will attack from all sides.

Operatives from around the country join Brock’s rescue effort, but as the identities of the Donovan’s rivals are revealed, Brock realizes there’s more at risk than Sydney’s safety. The Underground Unit operatives have bounties on their heads and at the going rate, it won’t be long before the danger moves close enough to destroy the operatives and all they hold dear.

Brock Donovan clenched his fists until his knuckles popped. He dug his fingernails into his palms. Droplets of blood trickled down his wrists. A bead of sweat slowly ran from his brow to his chin. He’d never known such rage. At the same time, he’d never experienced such outright pain.

He was furious, but unable to strike out at the ones who’d angered him. He wanted revenge, but before he could call upon the Underground Unit for a retaliation mission, he had a more important task at hand.

He needed to hold it together long enough to find out where his enemies were holding the love of his life, his submissive woman, his beautiful wife.

“Specifics, damn you! I’ll do whatever you ask. I’ll pay millions. I’ll trade my life for hers. Just tell me what you want! Name your price!”

His brother Jett leaned over the table. He kept his head down, his gaze glued to the phone. Riley paced behind them, muttering the same thing over and over again. “How could this have happened?”

Brock tried to shut out Riley’s broken tone. It was difficult enough to concentrate without worrying about the added voiced regrets from Riley and Jett or their repetitive death threats.

In order to kill an enemy, a man had to know who and what they were facing and as Brock listened closely to the orders barked from the other end, one thought kept going through his mind. He had no idea who they were dealing with. The Underground Unit operatives had infuriated many men, taken down cartels and key players in the mob, but who was stupid enough to go after one of their women? Who would abduct his cherished Sydney?

“Get a piece of paper, Donovan.”

“Go ahead.” The phone call was recorded. He didn’t need to scribble down instructions. He’d replay this conversation again and again. Still, he needed to keep his cool. He wanted to buy time and allow for opportunity on the chance they could later pick up background noises or faint dialects in the recordings.

The caller made a foolish error when he didn’t try to disguise his voice. With technological advancements and the tools they had at their disposal, if this guy had a criminal record or had ever given a statement, Brock would find out. He’d know who he was dealing with before the end of the hour. Still, it wouldn’t change one heart-wrenching fact. They’d failed to keep Sydney safe.

The fellow on the other end of the phone made his foolish, but nonetheless calculated, demands. “Are you still with me, Donovan?”

“The silence is defeating as much as deafening. Isn’t it?” His evil laughter rang out with the question. “You seem devastated, Donovan. Surely you and your brothers aren’t surprised. When you dabble in this sort of business, you expect casualties.”

Dabble? At this point, Brock wished dabbling covered it. Unfortunately, the Underground Unit had recently been credited for bringing down some of the most dangerous crime organizations of their time.

“Since we’re only amateurs here, let Sydney go. And if you let her go now, we can avoid future ‘casualties’ as you say. I’ll let you walk away without a scratch and I won’t come after you with the force of ten thousand men. You can walk away with your life and I walk away with my wife. Deal?”

The man bellowed his laughter. “You’ll let me?” He snorted. “The only thing you’ll let me do now, Donovan, is this—you will willingly give me your head instead of Sydney’s. Sound like a fair trade to you?”

Jett glanced up and shook his head sharply. Brock easily read what his brother wanted to say but couldn’t.

Brock’s voice gave everything away. His enemies had struck below the belt and brought a man and his family to their very knees.

From the beginning, Brock had feared this day might come. Every night before he went to sleep, he kissed his lovely submissive wife goodnight and prayed for her safekeeping. Still, even with the everyday dangers he and his teams faced, he’d allowed himself too much comfort. He’d begun to think of his homes as safe havens, too guarded and protected for a security breach.

As the perpetrator on the other end of the line gave specific instructions, Brock cursed himself for loving a woman, for endangering Sydney by loving her too much to let her go.

He hated himself for his vulnerability, for falling in love with an innocent young woman who deserved far more than any man in his position would ever be able to give her. Now, she was a bargaining chip. Their enemies had found the Donovan weak spot, the crown jewel they couldn’t afford to lose.

Natalie Acres is an international bestselling author with several past #1 Bookstrand bestsellers including Sex Games, Cowboy Boots and Untamed Hearts, and Sex Camp. An East Tennessee author writing in several genres, Natalie and her husband enjoy attending writing events and music festivals.  With a full roster of forthcoming books, Natalie gives frequent updates via social media.  She invites readers to follow her on Twitter at https://twitter.com/NatalieAcres or visit her on Facebook at https://www.facebook.com/NatalieAcresAuthor

Cowboy Boots Book 8 is sold exclusively at Siren-Bookstrand during its debut month. Purchase during pre-order status at a discount from the publisher at http://www.bookstrand.com/cowboy-boots-and-inconspicuous-motives