A Day in the Life of Christine Blackthorn (@CBlackthorn @sinfulpress)

I would love to tell you that it is a calm and quiet day full of contemplation and writing – but I have a toddler. This is notable and worth mentioning for sixteen months ago my day would have been tightly managed with a life alternating between being an academic and a writer. Then a introduced a whirlwind into my world.

My day starts with sunrise and I mean this literally. I can for example tell you that this morning the sun rose at 5.08 not because I am an ardent follower of sun cycles but because my son is solar powered. 5.08 was the first morning twitch. So, I get up as a mother, not a writer. Or it might be more accurate to say that I wake as I go to bed – as a storyteller. Every since I can remember there have been stories in my life, when I sleep, when I exercise, when I cook, there are always stories developing in my head.

So when my little being escapes his cot and comes over, dragging a book behind him with which to hit me over the head and remind me that it is time to tell the first story of the day, this is what I do. Though, contrary to the stories that will have brought you to this blog, the ones he hears contain more skipping dragons and fewer scantily clad vampires.

And this is how my day will progress. Between nappy changes, baby food, whilst we clean the kitchen together (ever read the Pippi Longstocking section where she puts brushes on her feet to clean the floor? No, try it with a one year old – it will be an absolute hit) or hang up the washing we chatter about dragons and fleas, fairies and foes. And the frog. Let’s not forget the frog.

And then there is nap time. Nap time is when my stories come out to play – the vampires and orcs, the aliens and everyday people. All generally running around saving mankind, alien kind, solving murders and conspiracies, whilst having a lot of sex.

All my stories, no matter if the characters try to solve a murder, save civilisation or just themselves, are about relationships and how they challenge us to be the best, or worst, we can be. This is what I am…. And the raptor cage rattles.

No, really. My son naps during the day in a travel cot besides me and to keep it dark in there we cover it with dark, breathable material. It is like a little cave from the inside but from the outside, the first signs of waking, are an ominous rattle and the cloth moving. The raptor cage rattles.

My afternoons are academic in nature. Teaching, counselling sessions, meetings … and here and there the glimpse of a well known figure, in the distance, possibly chasing along the parapets to catch a fleeing thief or who are burning the midnight oil to find that one detail that will save humanity. The characters in my books are always with me (and yes, that is what is happening when I get this glazed over look in meetings).

Early evenings, after bedtime and the obligatory story (not told by me but by my husband) allow me to get lost in my stories again. For a while. And then I close the computer and the evening belongs to my husband. And only to him.

A Variety of Chains excerpt

Slowly, he lowered more and more of his weight to rest on her until she could feel his hard and still clothed limbs against her nakedness. His arousal was unmistakable as it rested in the embrace of her body, only separated from her skin by the fabric of his trousers. His hand stroked down, over her hip to her knee, before he hooked a hand underneath it and brought it up to his waist, opening her further to him.

She wanted to blame the hour, so close to the fourteenth, for the wetness soaking his trousers, but knew that would not be entirely honest. Her body was wet with arousal and spasms of pleasure were tightening her womb. He started to roll his hips, stroking the fabric over a part of her that she had not realised could become so sensitive. With each stroke of his body against hers, something tensed in her a little more. His lips started to play with hers again, teasingly stroking over them and then nipping her with lightning speed. She needed something she did not know she needed, and with every second it seemed to come closer. The sound ripped from her throat was between a moan and a sob – and it stopped him in his tracks.

His brow came to rest against hers on a moan. “There is nothing I want more than to continue this so that when I ask you again if you have ever had an orgasm, you are in no doubt at all, but unfortunately now is not the time. Now is too close to midnight, and it would be careless of me to lose control.” 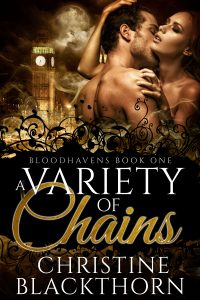 Kathryn McClusky is an ErGer – a rare and highly prized individual in the supernatural world.

She has spent her life running and hiding, but circumstances have changed and the only way to protect her family is to hand herself over to the Vampire Lord of London to face slavery or death.

Lucian Neben runs his London court with a stern but fair hand, but political pressures are building from both the human and fey worlds, and taking possession of an ErGer would cement his position of power.

Kathryn is vulnerable and broken almost beyond repair, but she holds in her hands the one treasure Lucian desperately wants – the possibility of home and family.

Can he teach her to open herself up; to choose to life, and him, before reality forces him to take her freedom? 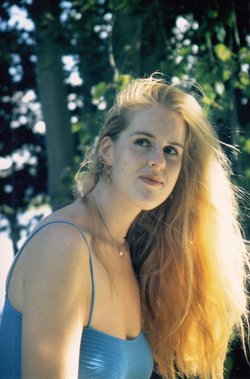 In “real” life, I am an academic with degrees in Political Science, Economics, Philosophy and Law and an insatiable desire to confound, baffle and disconcert my students. Someone once suggested to me the reason for my stories lay in the desire to offset the tedium and rationality of academic life. He wasn’t an academic or he would have known better. It is best to use research against tedium, students to offset the rationality and an unlimited supply of stressballs for the faculty meetings. The stories? Well, they are just for me – like a mental manicure.

I also write a blog on Feminism and Erotica – come talk to me:

Make sure to follow the whole tour—the more posts you visit throughout, the more chances you’ll get to enter the giveaway. The tour dates are here: http://www.writermarketing.co.uk/prpromotion/blog-tours/currently-on-tour/christine-blackthorn/