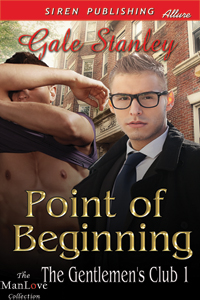 Hi everyone! And thank you KD, for letting me visit today.

When I was a kid the closest I came to romance were my mother’s True Story and True Confession magazines and I was forced to read them under the covers with a flashlight. We thought they were pretty risqué at the time, but those tales of sex and sin pale in comparison to today’s romance novels.

If my mother were here today, I’m sure she’d be shocked by my stories of MM romance, but somewhere along the way I discovered I enjoyed writing from the man’s POV much more than the woman’s. I love the emotional and physical connection between two strong male characters and the appeal of the male body.

One thing remains the same in every romance, we all love stories that focus on the relationship between the characters. We want to see the romance develop, the conflicts resolved and the heroes have an emotionally satisfying happily ever after. I’ve tried to put all that into my stories from The Gentlemen’s Club.  Happy Reading!

Note: These books were previously published with another publisher and have been extensively revised and expanded.

Geeky CAD technician Jack Monroe is bi-curious, but after he falls head over heels for a certain curly-haired construction surveyor, he’s ready to admit he’s gay. Too bad Alex James is straight and has a girlfriend who keeps him on a short leash.

Jack is determined to meet other gay men, but after a few dates from hell, he’s ready to give up. Then he meets Richard Caldwell, part owner of the exclusive Gentlemen’s Club where wealthy members can make their dreams come true. Richard takes Jack under his wing and offers him a chance to act out his fantasy with an Alex lookalike. Nobody can replace Alex, but knowing the real thing is off-limits, Jack accepts the offer. When the real deal shows up, Jack is convinced that Alex is only there for the money. But sometimes dreams do come true.

But then, Jack had pretty much hated gym class all through school. Always the smallest kid in the class, and the last picked for any game, he’d shied away from any kind of sports. He preferred to have his nose buried in a book rather than broken on the hockey field, and he couldn’t hit a baseball to save his life. At least no one ever bullied him, but no one wanted to be his friend either.

High school was more of the same. While the other guys tried out for football or screwed as many girls as they could, Jack spent his time studying or on the computer. What made it even worse was his sister had been a top-notch gymnast who’d almost made it to the Olympics. Lucy had gotten the best of the Monroe gene pool. Their parents had avoided comparing them, but sibling rivalry was inevitable. Jack couldn’t help swinging back and forth between admiring and detesting Lucy. To this day, they barely spoke and only saw each other on the holidays. His fault, not hers.

Jack pulled into the parking lot of the Liberty Gym, but he didn’t turn off the ignition. 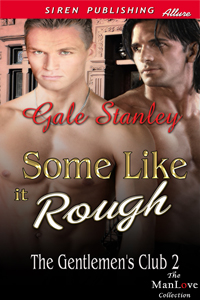 I can still change my mind. I don’t have to go in.

He’d almost turned back twice already on the seven-mile drive from work to the gym. Still undecided, he sat behind the wheel, thinking.

What the fuck am I doing here? Maybe twenty-eight is too damn old to start acting like one of the guys.

On the other hand, Jack was sick of being some kind of bibliosexual freak. All those years spent reading about other people’s lives, and he still had no idea who Jack Monroe was.

Will the real me please stand up?

A knock on the car window interrupted his thoughts, and Jack’s head jerked up.

His coworker peered in at him with a furrowed brow and a questioning look. Too late to change his mind now, the decision had been made for him. Jack turned the key and opened the door.

“Jack, you okay?” Alex looked a little worried as Jack got out of the car.

“Course he is. Let’s get a move on, before all the equipment is taken.” Kyle’s tone grated on Jack’s nerves. What the fuck was his hurry? The man already looked like a terminator. It gave Jack a bit of satisfaction that Kyle had to comb his thinning hair over a distractingly shiny scalp.

Jack ran a hand through his own thick, sandy mop and smirked. “Oh yeah. Wouldn’t want to miss a minute of this opportunity.” Bullshit. Kyle, being the only member, acted like they were here on his dime. In reality, Jack and Alex were using free passes that Kyle had scarfed up because the gym was doing a big promotion to get new members.

The three coworkers started walking around to the front entrance, Jack lagging behind. The gym looked like a shiny oasis in the middle of a very ugly strip mall.

“You coming?” Alex called over his shoulder.

Jack took a deep breath and picked up his pace.

Alex turned and grinned at him. “Wouldn’t want to lose you.”

If only it were true

Bad boy Julian Decker leaves his old life behind when he gets a job working security at an exclusive club. It’s lust at first sight when he spots wealthy member Richard Caldwell, but the older man is way out of his league and doesn’t even know Julian exists. Julian is used to going after what he wants, and when an opportunity arises he makes his move.

Prominent attorney Richard Caldwell is part owner of the Gentlemen’s Club, where wealthy members can live out their romantic fantasies, but Richard gave up on love when he lost his longtime partner to cancer. Then on one of his rare visits to the club, a seductive new employee catches his eye and makes him an offer he can’t refuse. For the first time in years, Richard is attracted to another man and he can’t deny the strong chemistry between him and Julian. But just as Richard starts to believe in miracles, he’s attacked and all the evidence points to his new lover.

“It’s okay. I get it. You want to fuck me.” Richard raised a brow. “Does that line always work for you?”

Julian grinned sheepishly and nodded. “But, Jesus, I can’t believe I said that to you. I was sorry afterward. Afraid you’d blow me off.”

His eyes locked on Richard’s.

“I think you better kiss me before you chew your lip off.”

Julian stepped in. The kiss was surprisingly gentle when it landed on Richard’s mouth. Julian’s lips were warm and sweet and slightly rough where he’d been biting on them. They caressed more than kissed. The touch of lips sent shock waves through Richard’s body, and he responded by deepening the kiss—slipping his tongue between Julian’s lips, moaning into his mouth when Julian sucked on it.

Julian’s hands explored Richard’s shoulders and back. They followed every plane and muscle of Richard’s body. Even through his clothes, Julian’s touch sent him spiraling out of control.

If only I could feel those hands on my bare skin.

Richard rubbed his hips against Julian’s. Their fabric-covered cocks made contact, and Julian moaned. He could tell Julian really wanted this. So did he.

What the hell is he doing to me?

Finally they broke for air. Panting, Julian rested his forehead on Richard’s. “Wow.” The word turned into another kiss as he slipped his hands inside Richard’s jacket and pushed him back against the car. At six feet one inch, Richard was tall, but Julian was taller and heavier. The bigger man pinned him with his body, and Richard’s hands came up to tangle in Julian’s dark hair. Julian trailed kisses along his jaw, and then his hot, wet mouth opened on Richard’s neck, licking and sucking. Amazed at how quickly he gave up control to this man, Richard tilted his head to give him better access. It wasn’t enough. Moaning, he tugged on Julian’s hair.

“What do you want, Julian?” Richard whispered.

“You, this, us…” Julian’s voice was husky with need. “Been thinking about it so long.”

“Thinking about what? How did you picture us?”

“You. On your knees. Your lips wrapped around my cock. Sucking…” The big man shivered.

Suddenly, Richard realized he wanted the same thing. An image of himself in the submissive position with Julian’s cock in his mouth made Richard’s chest tighten with anticipation. He’d never believed submitting to be a sign of weakness. On the contrary it had always been a sign of strength, of being secure enough to allow another man to take control. In the past that other man had been Tony, and Richard had trusted him completely. Together they had explored things that Richard had only dreamed of. Tony had given him the strength to be himself and the courage to make his fantasies a reality. Without Tony there would be no Gentlemen’s Club.

Can I trust Julian?

Smut By The Sea:Scarborough is THE Place to be this June → ← Eight Great Ways to Promote your Books by Lucy Felthouse