Fulfill Me by Victoria Blisse 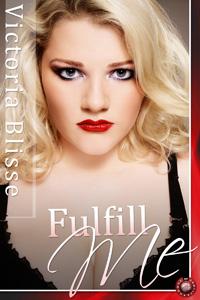 Caitlyn is out to get what she wants and she desperately wants Nick Casey, Star of Dobsons Digs the biggest soap on TV. She will do anything to get into his life but one thing, one person always stops her. His annoying yet handsome PA Mike.

“Yeah, I’m not enjoying it like I used to, and I have other ways to bolster my income. I’ll let someone a little younger and a lot less long in the tooth take over my place.”

“Wow, now there’s a scoop for the tabloids.” I laugh but Mike stiffens, and I realise it was a silly joke to make.

“I’m sorry, I didn’t mean that. Well it was a joke. I’d never ever—I just wouldn’t.” I trip over the words in my eagerness to make things right.

“No, no you’ve gone too far.” His hand squeezes my arm and his eyes don’t show the same anger as his words. “You’re going to have to be punished for speaking out of turn you impudent wench.”

Ah, now I know what he’s doing and the pit of my stomach is rolling like a machine full of lottery balls.

“I’m so sorry, sir, please don’t punish me. I’ll watch my tongue in future, I promise.”

“You will do wench, but you still need punishing. Stand up.”

I jump up off the sofa like I bounced up on a broken spring.

“Now young lady, follow me.” He stands up and walks me back out into the corridor then across it to a room I’ve not been in before.  One of many actually from the length of the corridor and the doors along it. When the door swings open, I can see clearly that it’s a study.

An old wood desk dominates the middle of the room. It’s back faces a massive window which shines as black as Whitby jet filled with the night sky.  In one corner of the room is a simple high backed chair with no arms. This is where he chooses to sit down and after shutting the door behind me I stand before him.

“Now only a young, foolish child would speak without thinking, so you’ll receive a childish punishment. Over my knees now young lady.” I hesitate, biting my lip. “NOW!” He barks, making me jump. “Don’t question me young lady, or you’ll not be able to sit down for a fortnight.”

I concede and lower myself awkwardly to his lap, the bottom of my clothed breasts rubbing the outside of his thigh, my pubis pushing gently against the other.  He quickly raises my skirt, folding it back over my bottom then he rips down the satin black knickers beneath.

He rubs his hand gently over the curve of my buttocks and I bite my lip, not wanting to moan out in case it enflames him more. I’ve never been spanked before but my cunt is wet and my nipples aching. However I’m not sure how much pain I can take. The idea is pleasurable, but the practicalities of it all make me anxious. I want to enjoy it, it’s obviously something he enjoys; I can feel his erection against my stomach. But I just don’t know how much punishment I’ll be able to take.

Suddenly, the thought is shocked from my mind as his usually soft hand slaps down with stinging harshness. It shocks me but it isn’t too uncomfortable. The next slap creates more heat than sharpness. I gasp and press my pubis forward trying to escape the next slap. It burns and I really start to question how much I can take.

It’s then that he gently caresses my burning rump and I mewl like a contented kitty until he snaps his hand back and slams it against my flesh several times in quick succession making me yelp with the stinging pain.

His fingers skim over my heated flesh then dip between my buttocks, tracing down between my thighs as they fall open for him, dipping into the moisture pooling there and gently teasing my clit.

“Stand up, wench.” He commands and I comply, though my legs feel shaky, and my knickers are dangling between my knees, making it decidedly difficult to stand up and keep my balance at the same time. He grabs my arm and drags me; well he never gets far in front of me so it’s more like he’s roughly leading me actually, until we reach the hefty desk. He kisses me and whispers in my ear. “You’re so fucking sexy, damn it.” He presses me down against the cold hard wood until my cheek is lying flat against its shocking coldness and my breasts are pressed down hard against the surface.

“Spread your legs,” he commands and I stretch them as far as I can, which actually isn’t far with the knickers hobbling me. Mike flips up my skirt exposing my still stinging buttocks to the air and his eyes. His soft lips kiss the reddened flesh evoking a gasp at the tenderness in the action. I close my eyes and wait for what will come next. I hear the clink of a belt buckle, and hear him curse as he struggles to undo his zip. I wonder if he’s having problems getting his hard on out. I could feel its stirrings pressing against my stomach when he spanked me, and I know it’s a solid robust thing, not made for bending or getting out of tight places. Getting into them; well that’s a whole different issue. The tell-tale crinkle of a condom packet heightens my anticipation. I know he’s going to fuck me and I can’t wait.

The Joy of Writing Neurotica → ← The Story Behind Kay Jaybee’s Hot New Novel, ‘The Voyeur.’

2 Responses to “Fulfill Me by Victoria Blisse”