It’s a total pleasure to have the very talented Jillian Boyd on my blog today. Jillian is the editor of the fabulous new anthology, Flappers, Jazz, and Valentino. Welcome Jillian!

Restless rhythms – All about that music called jazz 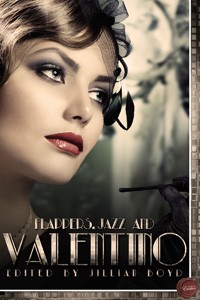 J.J. Johnson was once quoted as saying “Jazz is restless. It won’t stay put and it never will.”

Jazz music has been around in some form for quite some time, originating in the late 19th – early 20th century as interpretation of American and European classical music entwined with African and slave folk songs and the cultural influences of West African culture. It’s a genre borne of musical tradition, and one that’s ever evolving (still, to this day and probably way beyond).

And Jazz’s restless rhythms were a perfect accompaniment for the restless 20s. It was a time of change in so many ways; a time of choosing not to sit still and enjoy life as it comes after the horrors of the First World War. When the Prohibition kicked in, banning all sales of alcohol, Jazz music found its home in illicit speakeasies – the venues of the Jazz Age.

“If music be the food of love, jazz is surely the food of lewdness, of love that dare not speak its name, of the sort of “love” practised at petting parties and in speakeasies. What the young flapper may take for the cat’s pyjamas, father and mother rightly see as vulgar, cheap jazz whose wilful cacophony leads young people to degeneracy and depravity.”

The opening paragraph of The Sin in Syncopation, one of the stories in this very anthology, perfectly describes the opinion that many of the older generation of the time carried about Jazz music – viewed as an immoral threat to the old culture values and a promotion of the new and decadent values of the Roaring Twenties. One University professor dubbed it a sensual teasing of the strings of physical passion.

Now, I don’t know about you, but I don’t see why that’s a bad thing. Jazz is in a way like sex: it’s restless, it’s rhythmic and it makes you feel alive. So it was indeed the perfect soundtrack for an age with as much light as it had shade. Jazz is like the Twenties and the Twenties is like Jazz. Jazz music is still alive today, and the Twenties are (in a way) alive too. In pictures in books, in films, in memories, in today’s vintage culture; you name it and there will be a bit of the Roaring Twenties for you to take and cherish.

Best enjoyed with a side of Bessie Smith, playing on the gramophone, of course.

Step back in time to a decade full of glamour, glitz and decadent sin with this collection of erotica set in the Roaring Twenties. With twelve stories, in all shades from romantic and sensual to burning hot, this collection is the perfect appetizer for a night out at the speakeasy. A journalist gets a sexy introduction to the sinful syncopation of jazz music. A three-way tango performance becomes the steamiest ticket in town. The owners of a speakeasy set up a very special audition for their new trumpet boy. All this jazz and more in Flappers, Jazz and Valentino, edited by Jillian Boyd.

Cal jerked my hands away and for a second I thought that something was wrong. “Your dress,” he said, lifting my hands above my head before doing the same with my dress, tossing it to one side. I started to lift up my necklace, but he shook his head. “Leave the pearls. I like them.”

I watched as his eyes flicked down and ran up my body as they had at The Chapel before. Now, though, the look in Cal’s eyes was unconcealed, unrestrained. I looked down at myself, a little self-conscious. My crêpe de chine step-in had a lazy lustre in the dim light of the room and I hoped to heaven that I didn’t disappoint.

I felt fingers under my chin and a flurry of kisses as Cal tilted my head up to meet his. “Stand up,” he said and, as gracefully as I could manage, I climbed down from his lap. He stood too, slipped off his shoes and socks, and began to undo his belt. I loved this part. I was tempted to stand and just watch, but I’ve never been good at being passive. I pulled down the straps of my camisole as he started on his pants.

As well as my necklace, I’d kept on my rayon stockings. Men liked that. We stepped out of our remaining clothes at the same time and gazed at each other.

His toned chest, that I already loved so much, gave onto an athletic stomach and a not inconsiderable erection which jutted from angular hips. He raised his arms, etched with the delicately raised veins so often found on the male of the species, and wrapped me close to him, pressing my flesh against his.

I sighed as he lifted me in those strong arms and deposited me gently onto the mattress, falling onto me with his body and then with his mouth. His lips kissed a trail across my collar bones and then down into the subtle mounds of my small, thankfully fashionable bubs.

I could feel his prick pressed against my thigh as he bent over me and, truth be told, I longed to feel it in my hands, to take it in my mouth, even to take it inside me. I moaned as he found my nipple with his lips and alternated between kisses, licks and tiny teases with his teeth. I wrapped my legs around his body and ran one hand through his hair, the other over his back, arching into his ministrations and yet longing for more. More of him. More of everything.

Reaching down with one hand, I grasped his cock and began to massage it. I knew what to do, of course. If this was my first rent party, I’d certainly been to petting parties before. His moans into my breasts soon proved that. As I joined in, letting the thrill I was feeling at his touch out into the stuffy air, I wondered if the couple next door were having this much fun. I couldn’t hear them anymore, but the sound of music still sounded strongly through door, more so now as if more instruments had joined in.

He was bucking into my hand as I pumped him, his mouth fixed around my left nipple, sucking me slowly but surely. One hand propped him up and the other was at my right nipple, tweaking and flicking and twisting me into a frenzy. The pit in my stomach had turned into a pull in my pussy, an ache that I’d felt before but had been so much easier to ignore then.

Cal’s breath had quickened, become ragged, but now he pulled his erection back from my hand and his mouth from my tingling nipples. “Stop,” he said. “I’ve got a bit of an edge, but the way you’re going, Mae, I’m going to be completely useless to you in a minute. You’re going to make me come and I want to be inside you first.”

The words sent a pulse through my pussy. I wanted him, too. I knew it as sure as I knew my own name. And as sure as I knew I couldn’t let him have me. At least, not tonight. “I’m sorry, Cal. I can’t. I want to, but I can’t. Not tonight. You know what it’s like. This? This is nothing, but if I slept with every man who’d wanted to sleep with me after one night, I’d be dubbed a quiff before I knew it.”

I expected him to be disappointed, even angry. Instead he smiled and said jokingly, “Oh! Like that is it? You’re a popular girl!”

He planted a kiss on my lips. “I understand. You don’t let people take advantage of you, Mae, and you’re smart too. I guess I know we can’t, really. I want to. Oh, boy, do I want to, but I get it.”

“Well,” I said. “I took you to The Chapel tonight. We can go to another jazz club in the week, if you’d like that. There’ll be another party like this we can go to afterward or there’s my apartment, maybe even yours…” I wrapped myself around him again, pushing my lithe frame up into his body. I liked his body and I liked what I knew of his mind. My so-called unattainable man hadn’t been so unattainable after all, but he sure gave me a run for my money. And I liked a challenge.

I ran my fingers down Cal’s chest and along his cock, watching his face contort in pleasure. “We can meet in the day, too. We can date. And maybe after enough jazz clubs we’ll see about promising to go to a real chapel. But I bet sometime between now and then we’ll get to know each other just well enough for me to see if you give as good as you look like you do.”

He grinned and pulled away, slipping down my body in a smooth movement until his head was level with the fuzz of my vulva. “Oh,” he said, “I can give pretty good right now if you like.”

His warm breath hit me, teasing me, filling me with anticipation. “God, yes, Cal.”

His mouth bent to my pussy, nuzzling aside the hair there, and he touched his tongue to that tiny bud of flesh between my folds. He licked, and as he did so he picked up the rhythm of the jazz still filling the air through the door. Perhaps it should have felt odd, but with the music in my ears and my head in the clouds, it felt… Well, it felt like the bee’s knees.

Maybe Cal’s ridiculous article had been right after all. Maybe jazz did lead to sensuousness, maybe there was more than a little sin in syncopation. But if there was, well, I liked it.

Jillian Boyd is an erotica author and blogger, who has been putting dirty words on paper and on her blog for the past three years. She likes taking everyday, seemingly mundane situations and making them sexy and sensual – and when she’s not doing that, she lets her imagination fly off into history and distant planets. Where she also tries to find everyday situations and make them sexy and sensual.