Ellen March Gets Asked THE Question 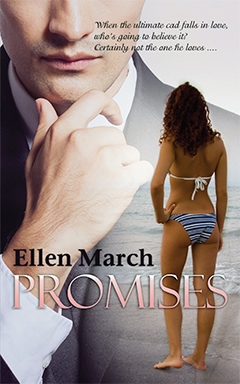 The interest I notice appears to be exclusively from males. Women simply give me that knowing, yeah I fake that as well look.

A few of my stories have some extreme elements about killers and stalkers incorporated in the plot. Yet nothing is mentioned about them.  Not one question about how I delve inside the mind of a deranged madman. Where do I research drowning, broken ribs, bullet wounds? Nothing on that. Nope, instead the usual query arises.

Invariably, where I’ve gained my sexual knowledge from. Is it from personal experience? And mention research to a guy and you’ve got an instant offer of assistance. Not quite one my husband would agree with LOL. But I won’t give you my answer. Wicked I know.

Hell if I tried to do and get up to half of my heroines activities I’d be in traction.

So I would like to know why this genre is expected to be lived. Yet realize I’ll never have the answer. Or if I do, think it’s going to be of a naughty but interesting reply.

She’d been in Brindley Bay six months and it felt like six years. How could other people lead such varied and exciting lives whilst hers was lived through the pages of a book? Well almost, she thought, taking care moving on up the rungs. An armful of dusty tomes cradled in one arm, her free hand gripped the rail. She wobbled her way precariously to the top and with a studied caution placed the books back into their gaps, evident by the dusty marks left behind.

“I’d be careful if I were you,” warned a deep voice, breaking through the silence and into her thoughts.

“Shit!” she yelled, and turned too fast. With a strangled scream, felt herself falling and landed in a pair of steely arms that held her tight.

“Lucky I was here.” Solomon’s fingers subtly probed her thighs, feeling for her suspenders. They rolled briefly over the slight bumps.

“If you hadn’t snuck up on me I wouldn’t have fallen,” she snapped, realizing he still held her. “You can put me down now.” She couldn’t help noticing how his muscles flexed. The glorious masculine scent rolled over her, twisting lusty thoughts.

He dropped her with infinite slowness to the ground, still keeping an arm around her waist. Pulling her close, he dipped his head and the tip of his tongue tracked a path along the contours of her lips, retracing every route he’d travelled.

Alex relished his taste, fresh and so sweetly intoxicating. She sucked in a breath, then exhaled a soft, ragged wisp of a sigh. Her hand stole up with the fevered intensity of a Christmas shopper. Urgent fingers rubbed the base of his neck in a sexy circling dance of wanton need. Shivers splintered down her spine and she could feel him growing hard. She craved him with a power that was burning out of control.

“Hello,” shouted a disembodied voice. “Alex, where the heck are you?” The words broke the spell.

Solomon’s gaze sparked down at her, his eyes dark with passion. “I’ll see you later. I think we’ve got some unfinished business.” The words swept out in a hush, his voice full of unspoken promises.

Alex couldn’t speak. She struggled to nod her head, trying to calm her body’s traitorous reaction to him. She wished she could remain detached, then realized she could. It was her fanny that was causing the problem, experiencing a dull throbbing ache that wasn’t going away. Her kickers were already damp.

Tania stood by the desk and her eyebrows rose when she saw the tall, dark-haired man. It had to be Solomon. Instantly she patted at her hair, pulled out her compact and, with a brief glance in the mirror, glossed her lips. She adjusted her top, tugging it down so her boob job and cleavage showed. Then she smoothed her short skirt, skimming it so it fell just beneath her rounded ass.

Tania homed in on him, watching him leave. His slim hips rolled in a loose, easy sexy-assed action. Her eyes steamed hot on his tight butt, the pale denim of his jeans straining across muscled legs. Then she turned her attention to Alex who looked as if she’d just been fucked senseless.

“That’s Solomon,” Alex breathed, wearing a silly grin on her face and a creased frown on her forehead.

“I guessed that, but what I want to know is what did he do to you?” Tania’s eyes narrowed with a shard of pure jealously. She nibbled on her lip, her gaze still locked on the stud of a man walking away.

“He caught me when I fell off the ladder. And Tan, if you hadn’t come in, I honestly think I’d be having it off with him between Sense and Sensibility and The Bridges of Madison County!” She shook her head in frustration. “I don’t know what it is about that man, but he’s only got to touch me and I’m like liquid gold.”

“After what I saw I’m not surprised,” agreed Tania, sucking in a sigh of jealous frustration.