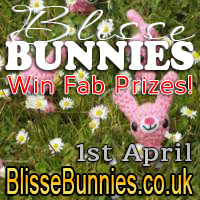 Even though you might not think it if you live in England, spring really has sprung. It’s officially here even if it doesn’t feel like it. The birdbath may be frozen over and there may be snow on the ground, but the dawn chorus has already begun to sing, and in spite of the worst of it I’ve seen signs of gathering nest materials among my feathered friends. We all wait for it, impatiently, knowing that we WILL get it. We WILL get that new beginning. Eventually. That’s what the Blisse Bunnies blog hop scavenger hunt is all about – new beginnings. Well, that and really cool prizes for the winners. Here’s all you have to do to join in the fun.

Here’s what you can win

You can win a £50 Gift Voucher to spend on yummy Xcite Books. Delivery is only available in the UK. So Treat yourself to some very sexy british easter treats!

One Lucky winner selected by the SexyReads ficklefingeroffate™ will win a £10 Amazon.co.uk or $10 Amazon.com Gift Voucher.

And now, here’s a new beginning from Elemental Fire

Smut Alfresco edited by Lucy Felthouse and Victoria Blisse → ← Smut By The Sea:Scarborough is THE Place to be this June
© 2022 K D Grace
Site created and maintained by Writer Marketing Services