Beverley Oakley Launches The Accidental Elopement with a Giveaway

Beverley is giving away a $10 Amazon Gift Certificate to on lucky winner. Please use the Rafflecopter below to enter. Remember you may increase your chances of winning by visiting the other stops on the tour. You may find those locations here. 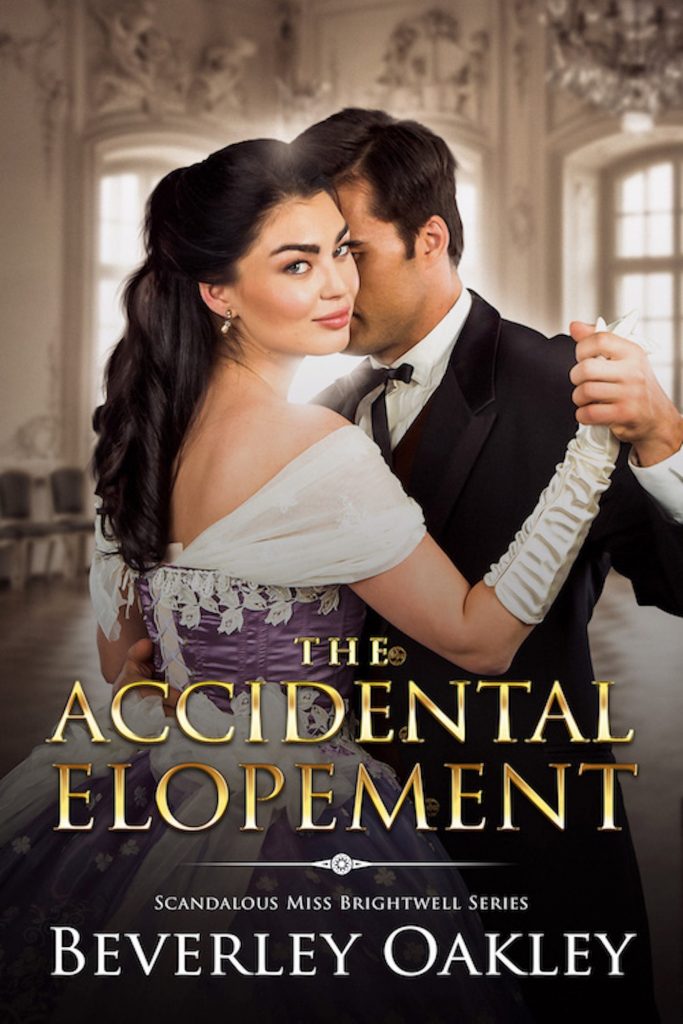 About The Accidental Elopement:

A seven-year secret. A tragic misunderstanding. Can love outwit fate in this twisted tale of misadventure and thwarted dreams?

Earl Quamby’s niece, Katherine, and Jack, a foundling home lad adopted by a local family, have been loyal friends for as long as they can remember.

As Jack is about to leave England to make his fortune and Katherine is being courted by two eligible suitors, they unexpectedly realise their friendship has blossomed into passionate love. A love, they are warned, that has no future.

Despite a brave attempt to defy the forces keeping them apart, tragedy results and the pair is separated.

When chance throws them together seven years later, Katherine, newly widowed, is being pressured into a marriage not of her choosing to avoid scandal and Jack feels he must honour his pledge to the worthy Odette whom he met in India and whose father is dying.

Katherine knows that revealing a long-held secret may win Jack to her but she also knows conflicting obligations from past and present may tear him apart.

Can master matchmakers, Fanny, Antoinette and Bertram Brightwell, outwit fate in its latest attempt to keep these star-crossed lovers apart and deliver them the happiness they deserve?

This is Book 4 in the Scandalous Miss Brightwell series but it can be read as a stand-alone. 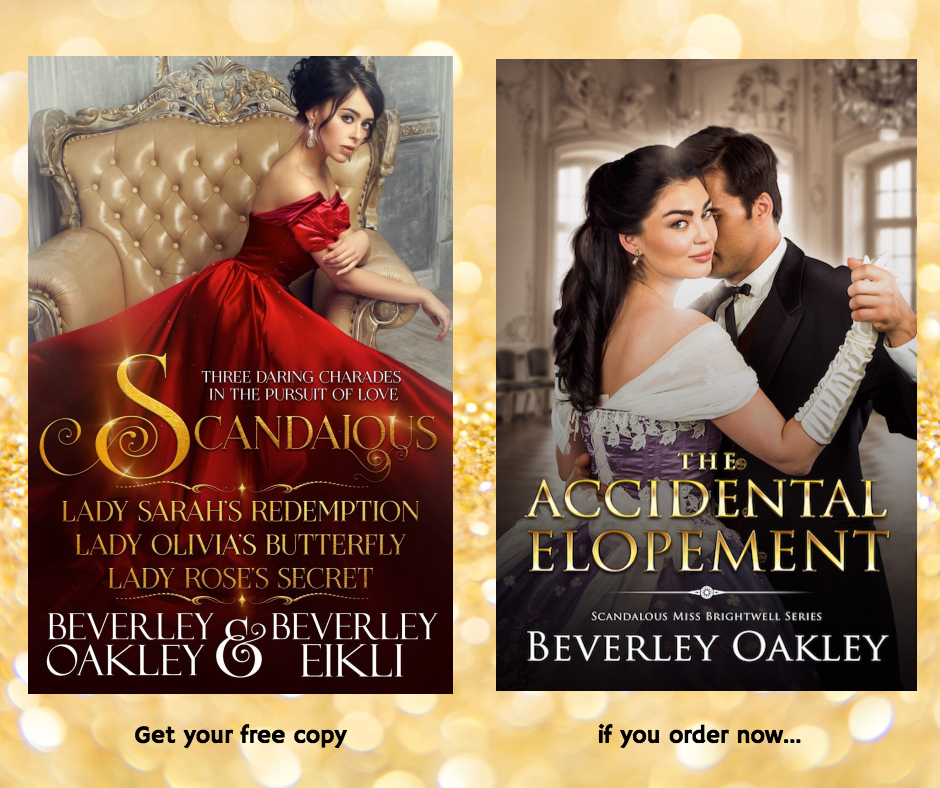 Order The Accidental Elopement now for the special price of $2.99 and you’ll get an ecopy of Scandalous: Three Daring Charades in the Pursuit of Love. Just send a screen shot of proof of purchase to beverley (at) eikli.com and she’ll send you the link for your free book.

In this excerpt, Katherine is hiding in a dark corridor to avoid dancing with someone she has no wish to see during her first ball as a newly arrived London debutante. She then receives a rude shock!

No one had thought to light a candle sconce and this second corridor turning she’d taken was as black as a dungeon. Katherine couldn’t even see her hand but she wasn’t frightened of the dark. No, Katherine was not fainthearted.

Yet she did squeal when, taking another step, her progress was impeded by a very large object and, with no warning at all, she found herself flying through the air, landing with a painful jarring of her wrists upon the cold, hard flagstones.

“Good Lord!” came a disembodied young male voice in the dark before a groping hand located a piece of Katherine – namely a hank of hair – which caused her to shriek even louder when it was quite unnecessarily tugged. Whether this was to establish who or what she was, she had no idea – and perhaps neither did the tugger for immediately a profound apology was issued before the groping hand was operating with complete abandon in the dark.

This time it found Katherine’s breast just as the voice said in tones of utter mortification, “Forgive me! Are you hurt? Here, let me help you. That’s what I was trying to do, I promise. I didn’t realise you were on the ground? Take my hand. Really, I can’t apologise enough.”

Katherine had made one unsuccessful attempt to stand but it was a struggle in her flounced skirt and multiple corded petticoats. She swatted away the supposedly helping hand and hissed something unintelligible – somehow unladylike language seemed less of an offence when she couldn’t see to whom she was speaking.

But when the disembodied groping hand entered her orbit once more – in fact, brushing the bare flash above her garter and getting in a good squeeze of her thigh flesh, her temper which had never been one of her strong points, snapped and she lashed out with a sharp slice through the inky air.

A loud yelp made her realise she’d perhaps been a little peremptory and certainly too violent in this unladylike action and even though she felt disinclined to apologise she did say, ungraciously, “I’m sorry I hit you but a lady can only take so much of all this groping in the dark. I mean…what were you doing?”

“I could ask you the same thing,” came the response, now at ear level. In fact, she could feel the soft whisper of breath against her cheek which made her step back, saying, “I asked first.”

“I was chasing a cat. Bending down in fact. And then something crashed into me. Or on top of me.”

“Yes, of course it was you. There’s no one else here, is there?”

Katherine bridled at his tone. She was unused to being spoken to as if she were at fault when, in this case, she most certainly wasn’t. “I think that’s a very rude response,” she told him. “Just as it was very thoughtless of you to crouch down where anybody could simply trip over you.”

“Anybody – or rather, anybody else – would be carrying a candle. I think I have every reason to be deeply suspicious of the motives of anyone who is not.”

“Well, you don’t have a candle. And I would suspect the truth of anyone hiding away in the dark, claiming they were crouching over an imaginary cat,” huffed Katherine. “In fact, I’d wager there was no cat here at all. I would have heard it. No, you were sneaking away from something, weren’t you?”

“And if I was, what business of yours? Whoever you are.”

Katherine could not imagine the audacity. “You certainly are no gentleman to speak to a lady in that fashion.”

“Since that lady hasn’t bothered to declare herself, I think I could be forgiven.”

“A gentleman would have declared himself first,” Katherine said hotly. “What were you sidling away from? There’s a noisy ball going on in the next room. If you were a gentleman, wouldn’t you be gallantly asking the ladies to dance instead of hiding in the dark? Perhaps there’s someone you’re afraid of seeing? A lady who has expectations of you behaving towards her as a gentleman.” Katherine said this triumphantly before elaborating on her theme. “My guess is that you’ve given some poor young lady the idea that you’ll dance with her all night and now you’ve changed your mind and are sneaking away.”

“Since you put forward the idea, I’d suggest the reason you’re here is exactly the same. You’re trying to sneak away from a gentleman to whom you’ve already promised two dances. Meanwhile he, poor fellow, is searching for you vainly in the ballroom while you’re here making a mockery of him.”

“He can do that all by himself,” Katherine sniffed. “But I never promised him anything and I never will.”

“Ha! I was right.” The voice sounded very pleased with itself. “Well, I feel sorry for this fellow without even seeing what you look like, miss. Poor fellow!”

“Poor fellow, indeed. George can pine til the cows come home. I’d even suffer talking to you than have to spend another five minutes with his sweating hands squeezing mine and his moon eyes boring into me…and his horrible, putrid breath choking me and his—”

“Poor George! I was just starting to feel sorry for him until you described the exact George I, too, am so at pains to avoid tonight.” The voice became more confidential and the mood relaxed.

Katherine crossed her arms and waited for him to speak again for she was rather interested in his George and then quite amused when the voice began to describe the very George against whom she railed.

“Well, you have described my cousin to a very fine point,” she laughed. “And if you are as well acquainted with him as you seem to be, then you obviously know exactly why I am here in the dark.”

There was a small silence. And then, “Your cousin?”

“In my family there are two Georges: Young George who is the son of my aunt and her husband, Lord Quamby, and Odious George who is his uncle, George Bramley.”

“Then we’re talking about the same George!” The voice sounded stunned.

A quick gasp from both of them was followed up by a delighted cry in unison.

Other Books In The Series: 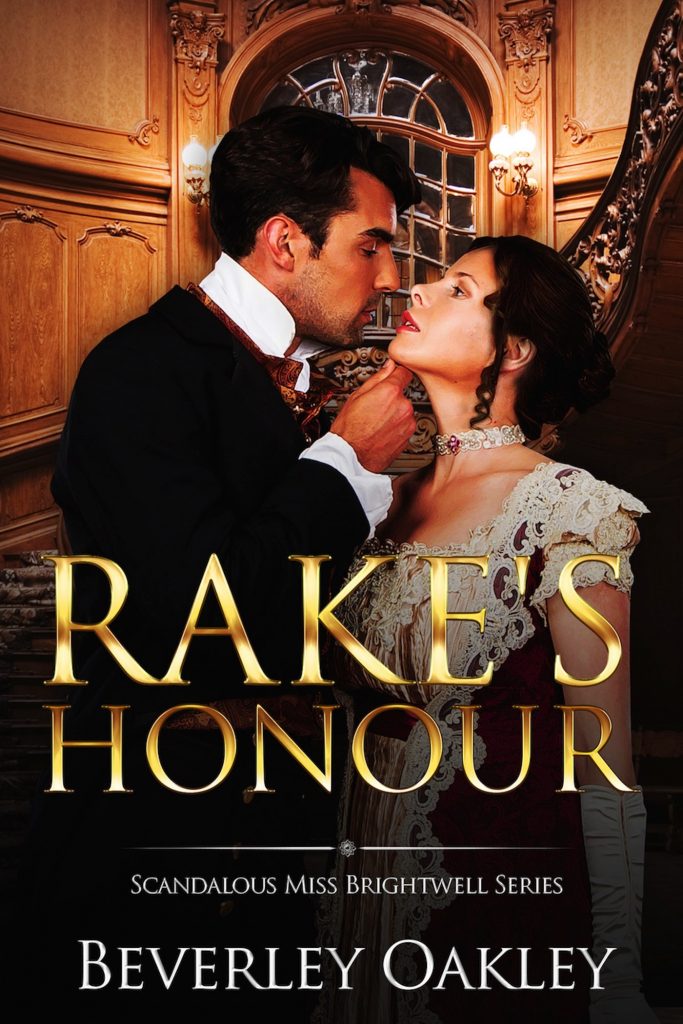 Beautiful, impoverished Fanny Brightwell has a few scores to settle—and a heart to win—before she can secure the wealthy, aristocratic husband her ambitious mama demands.

Pick up a free copy here! 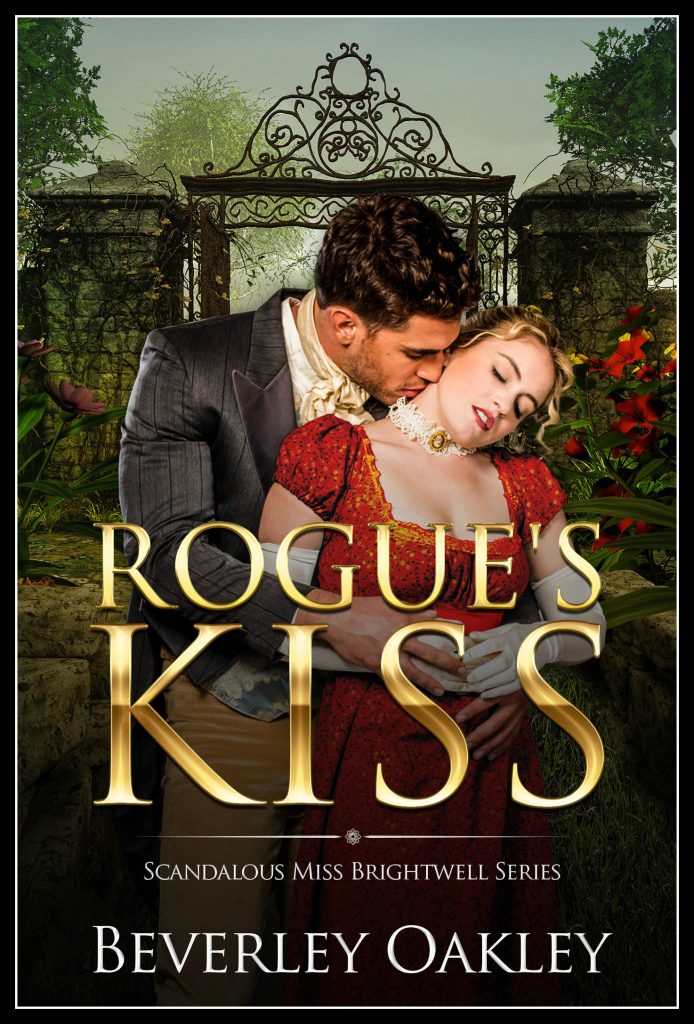 Would a potential suitor be bolder if he were told the lie that the maiden he desires has only six months to live? 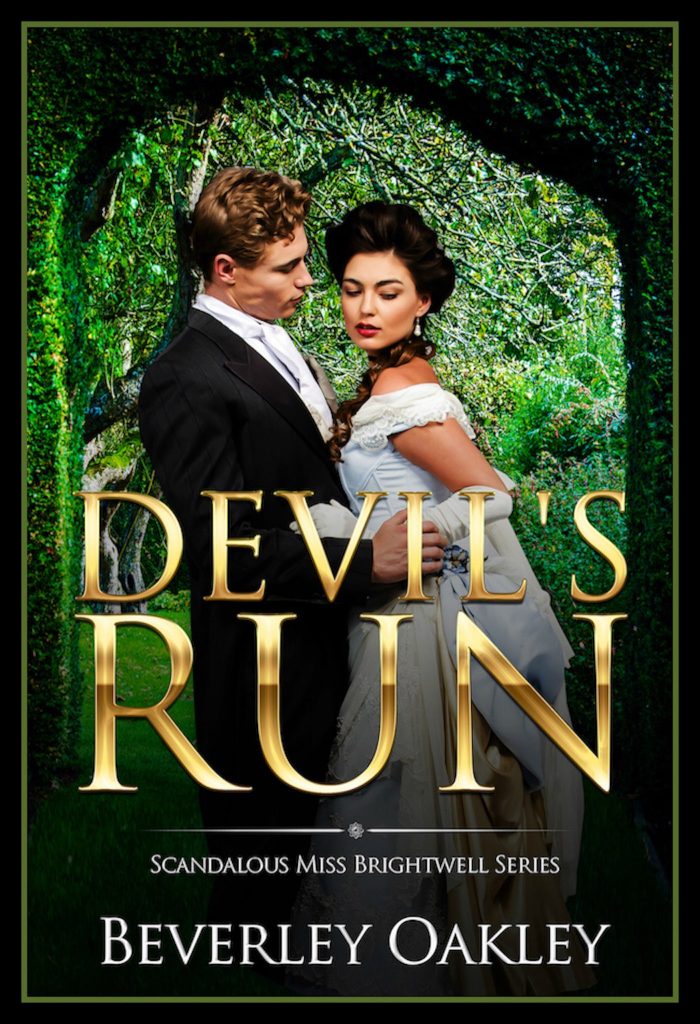 A rigged horse race – with a marriage and a lost child riding on the outcome. 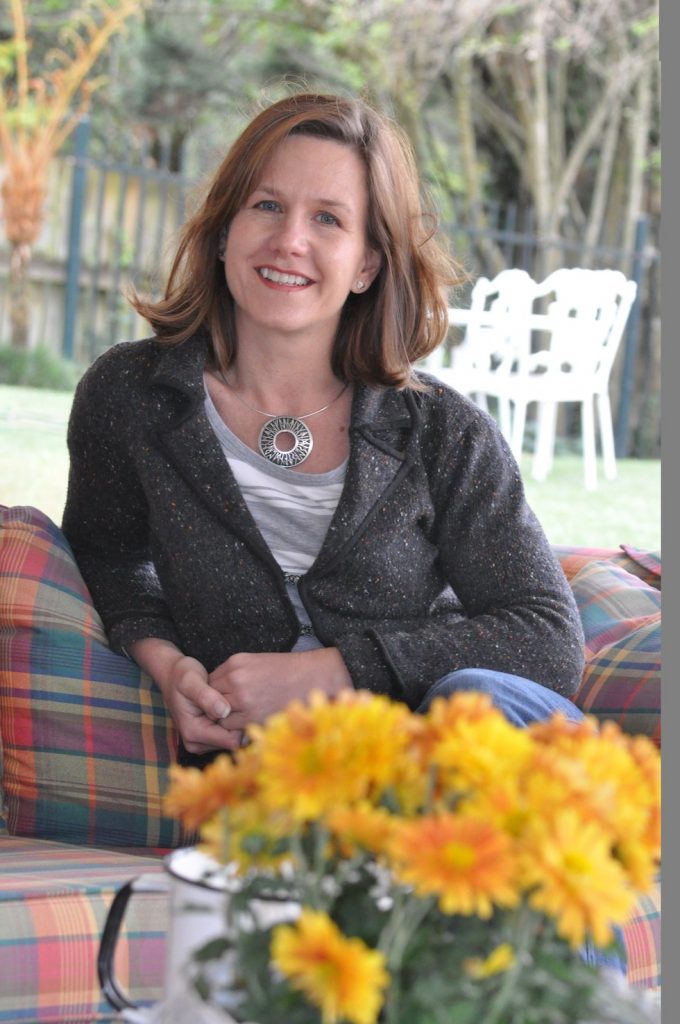 Beverley Oakley was seventeen when she bundled up her first her 500+ page romance and sent it to a publisher. Unfortunately drowning her heroine on the last page was apparently not in line with the expectations of romance readers so Beverley became a journalist.