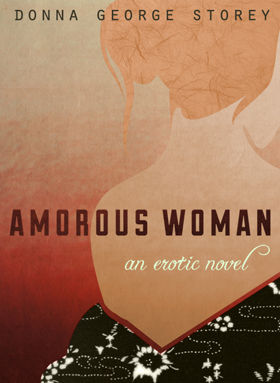 It’s a real pleasure to welcome Donna George Storey to A Hopeful Romantic to tell us the story behind her exciting and very exotic novel, Amorous Woman. Welcome, Donna!

Thank you so much for having me, K D.  I love reading about the “Story Behind the Story” of your other guests here, because I find the creative process so fascinating.  I’m celebrating the ebook release of my novel, Amorous Woman, which was inspired by my own experiences as a foreigner living in Kyoto back in the 1980s.  A few years ago, I had the opportunity to return to Japan with my family and take photographs of the settings that played an important role in the book.  I was surprised at how many memories came flying back from just walking under the cherry blossoms at a picturesque temple or savoring a handmade rice-flour-and-bean-paste cake.  Yet perhaps it isn’t at all surprising that the sights, sounds, scents, and sensations of a new culture made such a deep impression on me.  Like my protagonist, Lydia, I too had a love affair with this fascinating country. 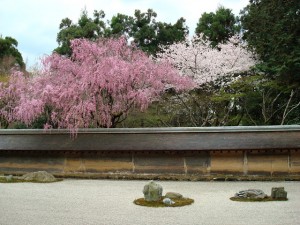 Lydia recalls the beginning of her love affair with Japan in “A Dancing Girl of Easy Virtue,” where an entire year “folds in on itself like a dancer’s fan, leaving one perfect day in high summer.” This ideal day begins in her futon in the company of a handsome and willing college student, continues with a flirtation on a bus with a brawny American tourist and ends in an exclusive restaurant in the pleasure quarters of Gion, where Lydia falls in love with an elegant older man over a kaiseki dinner. 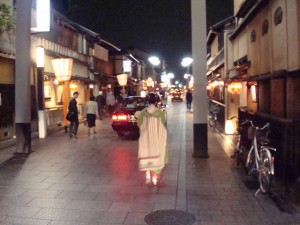 Gion is indeed much the same as it was then. Teenage maiko still glide down the lantern-lit streets in their colorful kimono. 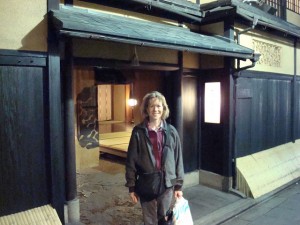 Chimoto, the restaurant where Lydia enjoyed a dinner of seduction, is still in business — no surprise as it’s been around since 1718.  Back in 1984, I parted the curtains and went inside for a nine-course meal of summer delicacies as the guest of a courtly dentist. This time I only glimpsed inside to be met with a curious glance from a passing waitress. 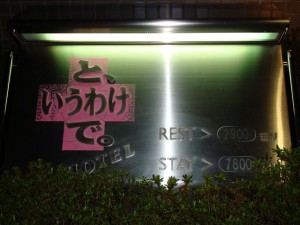 You’re supposed to supply your own reason to your spouse, but even if you don’t read Japanese, you can see from the sign that there are two options: an all-night stay for 7800 yen ($78) or a “rest” of a few hours starting at 2900 yen.

The floating world, that’s what they call it in Japan, the neon-lit world of dreams and desire and sex with people you aren’t married to, all rolled up together. It really did seem like I was floating that autumn, my feet hardly touching the sidewalk as Matt and I hurried along the narrow streets to the love hotel of our choice, at a different stop along the Hankyu line, every Tuesday and Thursday at dusk.

I quickly discovered that Matt liked me to tie him up. S&M games were popular in Japan — after all, Matt remarked, they even have a whole verb tense called the “suffering passive”–so the dungeon room was often taken when we arrived after our classes. But almost every room had handcuffs and tethers tucked in the nightstand and hooks at each corner of the bed for bad boys to get their just punishment.

Her affair with her American colleague convinces Lydia monogamy is not for her. As “The Fair Concubine of a Provincial Lord,” she trades the role of wife for that of hostess in an exclusive Gion club.  There she meets the urbane Kimura. With an uncanny knack for intuiting her desires, Kimura invites Lydia to the historic town of Tsumago so she can indulge her fantasies of old Japan.  Lydia and her patron enjoy strolling down the quiet streets and take a room in the town’s finest inn, where they first make love. 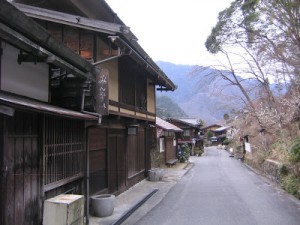 For the appetizer, Kimura liked to caress me slowly, pausing now and then, as if his fingertips were listening to my flesh whisper its secrets. He put the messages to good use. On our first night together in Tsumago, he found out my left nipple was more sensitive and that quick flicks along the right side of my clit were just the trick to send me over the edge. In the discreet inn in Higashiyama, he learned how I mewed when he drew circles in the soft crease of my elbow, and shivered in delight when he stroked my shoulder and pinched my nipple at the same time. Later, he grew bolder. He liked me noisy then, coaxing out a melody of sighs when he spanked me lightly on my vulva, then soothed my burning clit with a gentle stroking. 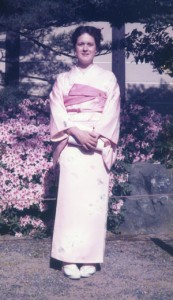