It’s my pleasure to welcome A.M. Hartnett to A Hopeful Romantic to ask that burning question, why write erotica? And to talk about her novella, Here for a Good Time. 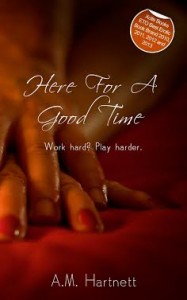 When I finished university and decided to dabble in writing, I discovered the market for erotica. After that, there was never any question as to what I was going to write. So needless to say when I started selling stories in 2006 and found out I was actually good at it, it was a bit of a relief, because it was pretty clear I couldn’t write anything else without filthy sex.

I tried explaining this to Arts Guy. AG is an online date I once had. We had similar backgrounds — degrees in English and love of books that spawned the need to write. He had seemed thrilled when he discovered I was a published writer, then snorted when he found out what I wrote. AG could come down on my smut all he wanted, but at the end of the day I could walk into my local bookstore and find a book that had my name in it, while he could go home and moan about how the university press wouldn’t recognize him as the next Robertson Davies and publish his angst-ridden shorts all because what he thought storytelling should be.

I may not be able to tell you why I write erotica, but I’m glad that’s the pins and needles path that sprang up in front of me. It’s fun, I’m good at it, and I like to think I don’t waste a reader’s time when they finish something I’ve written. My latest release is Here For A Good Time from Xcite Books. I love the chemistry between my characters Alexis and Chris, and I had a ball writing about the things they got up to when no one was looking. If I decided way back when that I was too good to write erotica, I would have missed out on a lot.

Here for a Good Time Blurb

When Alexis booked her work retreat at The Deveaux, the most she had to look forward to was a bit of spa time on the company dime, but flashy salesman Chris Kendrick has an even better suggestion. For years they’ve had a hot and cold working relationship with a bit of flirting mixed in, and now is the perfect time to get that spark out of their systems.

Three days hopping in and out of beds (and other convenient places) shows Alexis that Kendrick’s smooth demeanour is more than just talk, and that aromatherapy and soft-tissue massages have nothing on Kendrick’s firm hand.

Here for a Good Time Excerpt

‘Excited?’ he asked softly. His tie whisked out of his collar with a low hiss.

‘Give me your hands.’

Once more she did as he asked, and nothing in her life to that point had turned her on more than watching him bind her wrists with his tie.

He studied her as he tightened the knot, his brow crooked. ‘You ever been done like this?’

‘A time or two,’ she admitted in a puff of air. Three times to be exact, but she couldn’t recall being this hot the last time she put herself at the mercy of a lover.

‘Colour me surprised.’ He made a loop at the end, and then guided her arms up and hooked her.

‘After the way I pounded you this morning, I figured you liked a bit of rough stuff.’

Standing so close, his every movement made his clothes rustle against her, teasing her nipples into hard peaks while he unzipped himself. The moment she looked down, he caught her under the chin.

The tip of his cock, slick with precome, brushed her belly. Alexis itched to get her hands on him, to wrap her lips around that thickness and suck him until he gave her something to swallow, but she’d allowed herself to be putty in his hands and there was nothing to do but relent.

It was easy to do. She could practically feel the hum of energy in her blood as he ran his hands all over her body. His gaze never left hers. It was as though he was daring her to give him a reason to rebuke her.

A.M. Hartnett began writing in 2006 and has published more than thirty short stories. Her work has appeared in more than a dozen anthologies, including Cleis Press’s Sudden Sex: 69 Sultry Short Stories (Ed. Alison Tyler), and The Big Book of Orgasm: 69 Sexy Stories (Ed. Rachel Kramer Bussel). She has also written three novellas and a novel as Annemarie Hartnett. For more information on her publications, please visit www.amhartnett.com