I’m thinking about sex magic again. I think about sex magic a lot, actually. Certainly I’ve been thinking about it with the launch of Blindsided, as with every novel in the Medusa’s Consortium series. I’m always struggling to get my head around why sex is magic, why human sexuality defies the nature program /Animal Planet biological tagging that seems to work for other species that populate the planet. I don’t think I could write sex without magic, and even if I could I wouldn’t want to. I’m not talking about airy-fairy or woo-woo so much as the mystery that is sex. On a biological level we get it. We’ve gotten it for a long time. We know all about baby-making and the sharing of the genes and the next generation. It’s text book.

But it’s the ravenousness of the human animal that shocks us, surprises us, turns us on in ways that we didn’t see coming. It’s the nearly out of body experience we have when we are the deepest into our body we can possibly be. It’s the skin on skin intimacy with another human being in a world where more personal space is always in demand.

When we come together with another human being, for a brief moment, our worlds entwine in ways that defy
description. We do it for the intimacy of it, the pleasure of it, the naughtiness of it, the dark animal possessiveness of it. Sex is the barely acceptable disturbance in the regimented scrubbed-up proper world of a species that has evolved to have sex for reasons other than procreation. Is that magical? It certainly seems impractical. And yet we can’t get enough.

We touch each other because it feels good. We slip inside each other because it’s an intimate act that scratches an itch nothing else in the whole universe can scratch. During sex, we are ensconced in the mindless present, by the driving force of our individual needs, needs that we could easily satisfy alone, but it wouldn’t be the same. Add love to the mix, add a little bit of romance, add a little bit of chemistry and the magic soup thickens and heats up and gets complicated. I don’t think it’s any surprise at all that sex is a prime ingredient in story. But at the same time, I don’t think it’s any surprise that it is also an ingredient much avoided in some story.

So as I mull through it, trying for the zillionth time to get my head around it, I conclude – at least for the moment – that the true magic of sex is that it takes place in the flesh, and it elevates the flesh to something even the gods lust after. It’s a total in-the-body, in-the-moment experience, a celebration of the carnal, the ultimate penetrative act of intimacy of the human animal. I don’t know if that gives you goose bumps, but it certainly does me.

It was a dark place where she found him, with walls so high only a small patch of starlight was visible above, but she was a vampire now. She didn’t need the light, and he, well he had never needed the light, had he? He stood naked with his back to her. He was broad of shoulder. There were white scars like latticework across muscles stretched taut over his shoulder blades. At first she thought they were from a whip, but as she drew nearer, she saw that they were more geometric in form, as though perhaps they were some sort of ancient ceremonial writing. She traced the shapes of them with the tips of her fingers, and his muscles rippled with the sensation. With a start she realized she’d never seen his body before.

“You’ve worn flesh often enough. I would have thought it was always of your choosing,” she said, making no effort to hide her bitterness.

“It was not my own, though. That pleasure, I have never known.”

“You know that it is.” He didn’t turn to face her but leaned toward her, and she slipped her arms around him and rested her head on the flat of his back. His belly tensed at the touch of her hands, and he caught his breath in a soft moan. “Touch is what I longed for most,” he said. “I thought the lack of it would drive me insane while I languished in my previous prison. But here, with you, I’m closer to touch than I would have thought possible. I do not mind it, you know. It is no hardship to be nestled inside you, close to your heart.”

He pulled her arms back around him and sighed with contentment as she laid her head against him once more. “This is how I have decorated. The place you created for me was only the shape of myself, both boundless and infinitesimal. Oh, it did not matter. I could see through your eyes, feel through your flesh, even though it no longer lived as it once did, even though you never spoke to me. I hoped that someday you would.” 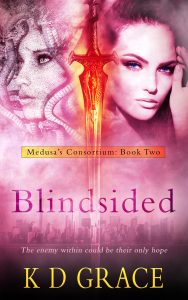 She thought about that for a moment. Was it even possible to visit the dreams of a demon? Did demons even have

“If I had come to you more gently, if I had courted you and companioned you and been patient with you in the ways of your world, would you have loved me?”

“You never gave me that chance.”