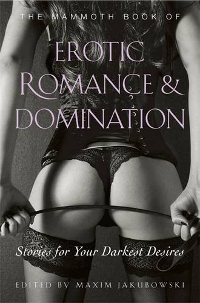 When a sudden summer rain causes an unexpected trespass, a reclusive sculptor, who can’t bear to be touched and a walker suffering from depression forge an intimate connection.

I had no intention of returning. Really! Just your basic trespassing was as much a walk on the wild side as I was up for. But then I dreamed that night. I dreamed that the statues had all been brought to life by my sexual attentions, by the touch of my aroused juices against the stone. When the moon came up, they followed me back to the cottage. I, being a good hostess, invited them in to do very naughty things to me.

Even after the dream, I wasn’t going to go back. I’m simply not a rule breaker. But somehow in my hurried exit, I’d lost my good luck scarf. It was just a cheap paisley neck kerchief I wore when I walked. It was bright and cheery. I bought it from a shop in Tintagel as a reward for finishing a particularly challenging leg of the Southwest Coast Path. It had been a personal triumph; something there’d been way too few of in the past two years. Back then I was just beginning to realize what walking could do to ease my depression.

But all discussion aside, my reasons for returning to the breach in the fence were just excuses. The truth was I couldn’t resist a proper look around. Who could have under the circumstances?

In thirty minutes I stood at the breach once more, heart hammering, sweat dripping down between my breasts from the unusually intense sun. This time I squeezed through the gap in the fence without a second thought. Honestly, it was just a little look-see. And besides, I really wanted my scarf back.

The shade of the trees was a relief from the heat and, as I made my way around the rhododendrons and hawthorn anticipating a little exploration, I stopped short in my tracks. There was my scarf folded neatly and tied over the eyes of the statue about to fellate the marble erection of her male counterpart.

I was just going to grab the scarf and run and never come back. Really, that was my plan. But as I approached I caught a whiff of sandalwood, and there was a rustling behind the rhodies. I froze.