Okay, so here it is; the real story behind the story. Here’s the truth about what happened  when dirty minds ran amuck late at night after Eroticon 2012 in the Ibis Hotel in Bristol. I swear it’s the truth because I was right there running amuck with the best.

I can’t say we’d had too much to drink. We hadn’t. I can’t say there were any drugs involved, unless you want to count the cold tablets I was popping for the springtime sniffles I had. What I can say is that we were high on smut writing. We’d just spent the day at the first annual Eroticon in Bristol. That was last March. We’d had dinner with some of our naughty compadres, and then Lily Harlem, Victoria Blisse, Lucy Felthouse and I went back to our hotel, which had a lovely all-night bar. Since we live in opposite directions in the UK, we seldom get the chance to catch up and talk writing, so we were up for the long haul. 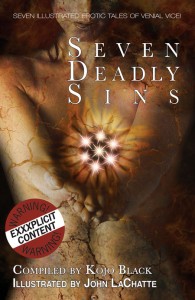 Lily Harlem started it. Yes, she’s the one to blame! After some raucous conversation about what we found sexy and what we liked to write about, she pulled out a pen and a scrap of paper and we began brainstorming ideas for smutty anthologies. We considered sex at work for an anthology; we considered sex alfresco for an anthology, we might have even considered food sex. Oh, the possibilities! And then Lily did it! Lily brought up the idea of an anthology about the seven deadly sins, the perfect way to cover all the naughty bases in one filthy swoop.

My hand was the first in the air to write a story about lust. Bet that surprises you, doesn’t itJ Victoria wasn’t far behind me, volunteering for gluttony. Lily was all up for envy and Lucy put in for pride. And so the night went. I’m not sure how serious we all were at the time. It was long after midnight, and to say we were punchy is an understatement. When a party of rather inebriated lads flooded into the bar singing Iris folk songs loudly and badly, we adjourned to Victoria and Lucy’s room and continued planning and scheming.

The next day we all hopped our trains and went back home. My sneaking suspicions is that it was Lucy Felthouse who is to blame for what happened next, though I’m sure that Lily was partly responsible for filling in the three remaining sins with naughty writers, Sarah Masters took up the cause to wax filthy about wrath, Lexie Bay weighed in with sloth and Rebecca Bond took on greed.

And, after that the blame all goes to KoJo Black over at Sweetmeats Press who bravely agreed to take on the brainchild four under-slept smutters had mapped out on a scrap of paper in a hotel bar. Thanks KoJo! Nine months later, Voila! A very naughty, anthology is now available for your reading and viewing pleasure, with illustrations by John LaChatte in the paperback version and in the Waterstones eBook version. Thought the eBook is available in all the usual places, do remember, if you want the naughty illustrations in your eBook version, you have to get it from Waterstones.

I confess, this anthology is truly sinful X seven, and I do hope that this little peek into the naughty origins of The Seven Deadly Sins will lead you into temptation to get your copy, and then let the filthy authors and that dirty boy of an illustrater, John LaChatte do the rest. I forgot to mention you can also buy each of the seven stories separately in eBook format if you have a favourite vice.

Aphrodite Gets a Piece of the Action by K. D. Grace
A young voyeur finds himself faced with the almighty task of going global with Lust!

Caged by Rebecca Bond
Greed pushes a policewoman straight to the top. But her quest for power uncovers more desire than she ever knew she had!

Glutton to Gourmet by Victoria Blisse
Anabel has never known when to say ‘when’. But the dashing Roman shows her that quality is just as delicious as quantity.

Green Eyed Monster by Lily Harlem
Penis Envy takes on a whole new meaning when Helen hatches a plan to use her own “cock” to its fullest extent!

An Indolent Seduction by Lexie Bay
When the demon of Sloth sets his sights on the angel Industria, apathy becomes dangerously alluring.

The Sweetest Revenge by Lucy Felthouse

Abigail’s crush on Mackenzie has made her do something stupid. Will Pride come before a fall…or cause them to fall in love?

Something Else by Sarah Masters
A man’s Wrath at the loss of his lover sets him on a vengeful path that leads him through a seedy and sexually charged underworld. 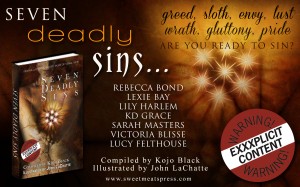 Blurb for Aphrodite Gets a Piece of the Action:

Excerpt from Aprodite Gets a Piece of the Action