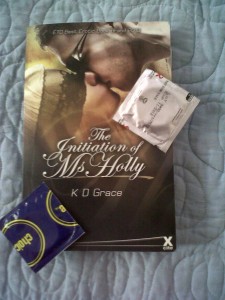 My stories are my fantasies, entirely and completely the product of my imagination. I’m a firm believer that my readers are intelligent and savvy and very aware of the world around them. I also understand that some people prefer their fiction and their fantasies more realistic. Fair enough. Fortunately for them, there are writers who prefer to write that way. I don’t happen to be one of them.

I have written stories for which the submission guidelines demanded the use of condoms in all scenes involving penetrative sex. I gritted my teeth and wrote what the guidelines dictated. But it seems to me that the message such guidelines send is two-fold. First of all that because erotica is about sex, it’s automatically more dangerous than other types of fiction, and secondly that readers of erotica are just not as smart as readers of other types of fiction and they must have extra instruction and guidance to equip them for the reading of such dangerous material.

Erotica is, by its very nature, the place where the reader can experience for him or herself what would never be considered safe in the real world, what, given the opportunity to do in the real world, given the opportunity to participate in, her or his response would be an unequivocal ‘No thanks.’ Is it any different than a thriller or a horror story, or an adventure novel?

The whole point of a novel is to live vicariously a life that one wouldn’t have the opportunity, and more than likely wouldn’t even want to live, if one did have the opportunity. Commercial fiction is all about vicarious thrills and vicarious experiences from the safety of our own home. That’s why reading is so much fun.

I believe readers should be given credit for discernment, credit for being as savvy about the differences between erotic fiction and reality as they are about the differences between other kinds of fiction and reality. I’m not saying that fiction can’t be didactic. And indeed part of the beauty of fiction is that it offers the inadvertent opportunity to learn something new. What I am saying is that I tell stories. I tell stories for fun in a world that, I think, could use more fun. If there are lessons taught, they come about inadvertently while I’m having fun telling a story. But I don’t feel a deep burning need to tell my readers to do what they already know to do, what they’ve been aware of every moment of their lives from the time their old enough to understand that the world is a dangerous place. And sometimes the world adults must live and function in can be a boring place as well. If they’re like me, and I assume at least some of them are, that dangerous world, that boring world, is a very large part of the reason they enjoy fiction so much.

2 Responses to “Regulating Our Fantasies”