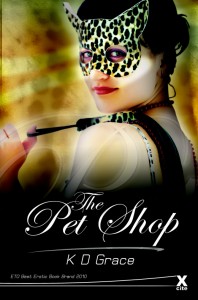 One thing you have to learn about Pets is that they are unpredictable and sometimes in the very nicest ways. If you leave them alone too long, they might get into trouble. In this case, I sent them off to Xcite, and before I know it, they show up on Amazon Kindle!

There’s a lot of excitement at Pet Shop HQ today because my fabulously unpredictable Pets got launched early! The Pet Shop is now available on eBook, pdf and Kindle! The link is great, and the excerpt on Xcite is scorching hot!

The fun is just beginning, actually. There’ll be more celebrating when The Pet Shop comes out in paperback in October. I’ll keep you posted.

To help celebrate, here’s just a little teaser from The Pet Shop.

He picked up the pace. ‘Tino’s not here.’ With his arm around her waist, he guided her away from her car to a waiting limo.’

She didn’t protest as he opened the door and helped her inside, sliding in next to her. Then he knocked on the privacy window and the driver took off.

‘Seems a strange vehicle to bring to a nature reserve,’ she said.

‘You really think so? My dad made the big bucks in shipping, you know, and the Port of Portland has a reputation for murder and all kinds of intrigue so rich men can have what they want. So of course I have a limo.’ He leaned close and nipped her ear. ‘And you just hopped right in with me, didn’t you? You know what they say about accepting rides from strangers. Are you scared?’

She held his gaze. ‘You’re not a stranger.’

He chuckled softly and returned her gaze as though he were the king of stare-downs, then he released his breath slowly. ‘Anyway, I didn’t bring the limo, but you can’t go back in what I came in dressed like that.’

‘Then you have to be Tino, or you wouldn’t have –’

He covered her mouth in an insistent kiss. ‘What?’ He spoke against her lips ‘You think I wouldn’t notice the sexy English bird distracting me from the all the other birds.’ He teased her lips apart, sparring with her tongue, making her insides feel like warm toffee. She was relieved to hear no anger in his voice.

She came up for breath. ‘But how else would you — ’

He nipped and tugged on her lip. ‘Tino’s not here,’ he whispered against her mouth, slurring his words with the flick of his tongue. ‘There’s just Vincent.’

‘What are you, schizo then?’ she let out a little gasp as he nibbled her earlobe then the hollow of her throat.

‘Didn’t you take psychology 101? We all have more than one person living inside us, Stella.’

‘Where are we going?’ She asked, feeling suddenly disoriented as the driver turned onto the main road and picked up speed.

He kissed her again, and his hand moved up the inside of her thigh. ‘Don’t worry. My people will take care of everything.’

‘But I thought –’ With a sharp little gasp, she suddenly forgot how to speak, as his fingers slid aside her thong.

‘Did you wear these for Tino, hoping he’d take them off with his teeth? … Because I won’t bother. I’m not here for your entertainment.’

‘I never thought that you were,’ she said, giving him an ineffective shove with the flat of her hand. But he took her mouth again, and the way his tongue invaded and withdrew and invaded again, the way his fingers teased and retreated and teased again made her stop thinking about… well everything, really.

He pulled away at last and held her gaze. ‘We have until we get to Portland, Stella. You can waste time trying to find out about Tino or you can spend that time with Vincent. It can be such a pleasant drive to Portland.’

2 Responses to “‘The Pet Shop’ Hot and Steamy Early Debut!”