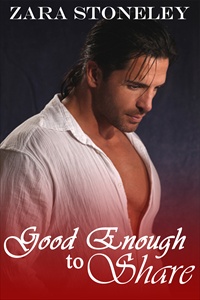 One Christmas, four friends – but will they still be together by New Year?

Divorce wasn’t part of the plan for Holly, but then again nor was spending the festive period with two sexy men and Santa’s little helper! With a disastrous marriage behind her, and three good friends who are willing to share, moving on could be fun – if only she can accept that sometimes her heart is wiser than her head.

Dane doesn’t do commitment, which suits Holly just fine. But when things heat up between the four friends, he’s forced to face up to his past. Will realising he’s good enough mean he no longer wants to share…?

Laid back Charlie knows that if his best friend becomes his lover he could end up losing big time. But can he resist? And when the girl he once loved comes back, who will he decide to spend the New Year with?

…And Sophie just wants to have fun. She’s got the answers to everyone’s problems, except her own …. is she the one who needs good friends most of all?

Will a caring, sharing, lust and love filled Christmas lead to the happy ever after they all desire?

“You two out on the pull then?” You know how some deep male voices have that perfect resonance to vibrate right down to the bottom of your stomach and beyond? Yeah, that. I was blushing from the inside out and I had completely and utterly forgotten about Charlie, with or without a surfboard.

Christ, why was it that every time Dane Stephens popped up I was dressed in something that either said ‘shag me, I’m a complete tart’ or ‘I’m a complete saddo’? Or in this case a mixture of both. The fact that Sophie and I were propping up the bar, both with a goblet of wine in hand each didn’t help with the image much either.

“We’ve been working.” I tried to keep my face straight and stop my nipples making a break for freedom as the gorgeous guy who seemed to feature in every one of my current run of dirty dreams rested his hand on my shoulder and sent a warm thrill straight between my thighs. Along with a very strong urge to grab hold of him and give him the type of kiss that would leave a lasting impression. Gee, life would be so much easier if that kind of full frontal attack was one of my special skills. It wasn’t. Best mates with a bit of flirting thrown in as a side order was a better description of my capabilities.

I’d been having dirty dreams about Dane for as long as I can remember. Well, probably since the first time all six foot something of him had swaggered into this bar and given me the type of smile that gave me an almost, emphasis on almost here, uncontrollable urge to strip every last inch of his clothing off in slow motion. But I hadn’t, because nice girls don’t, do they?

“Been out hammering shoes on?” I tweaked a bit of straw out of his thick dark hair and resisted the urge to tangle my fingers in deeper, just in case I’d missed a bit. And then rub a hand over that broad, strong chest just for good measure. He was buff underneath that shirt, I just knew it. Well, I did actually. I’d seen him strip to the waist the odd time at the tail end of the summer when we’d actually seen a bit of that golden orb in the sky they call the sun, and he’d built up a sweat manhandling horses. And along with every other girl on the yard I’d gone weak-kneed and tried not to stare as I’d watched his muscles ripple and a trickle of sweat bead its way down his back. A bead of sweat that needed licking off.

I’d had a thing about cowboys, well, since I was fifteen when my boy friend, as in two separate words, had dragged me along to watch a western in the local cinema. His idea had been to get his tongue down my throat, but he’d faded into insignificance when the hero of the piece had got off his horse. This had been no normal cowboy, he’d been naked down to the low slung jeans that barely scraped his hips and when he’d slipped one hand under the waistband, just as he tugged the girl in for a kiss the rush of dampness to my knickers had shocked me. And left me squirming, and meant that the boy friend got an end of show, tongue twisting snog that shocked me more than as it did him.

And as I grew up I realized men like that just didn’t exist. I just never met a man who’d had the same effect on me, not even the man I’d married had done that. Until Dane had walked in four long months ago and been the nearest thing to a cowboy that the English counties had to offer. He’d probably never had a Stetson on his head, or a rifle in his hand, but I bet he’d look good on a horse and even if he didn’t, in my mind it just didn’t matter. Dane was just hot, and made me hot, and wet.

His jeans were slung just the same, so I just knew I’d be able to see his hip bones if I unbuttoned that thick cotton shirt. And boy did I want to, and I was just itching to slip my own hand tight in there. I just needed an excuse and September through December had left me too tongue-tied to find one. Even if my horse seemed to be throwing a shoe on a weekly basis and he’d been out an embarrassing number of times.

“Yeah, lots of thrown shoes, darling, you know ‘tis the season.” He winked and my mouth watered. Literally. Much more and I’d be drooling, a drooling elf who would have thought? Bugger, I really did need a plan or I’d be spending another Christmas morning just wishing I’d asked Santa for the type of toy box that had long life batteries and lube in it. But was quiet enough not to disturb Charlie.

“Hi Dane, boy. We—” Sophie was practically licking her lips, he had that effect on every female old enough to have hormones, as she drew herself up to her full five-foot one and a half inches and put a hand on his arm “—have been doing our good Samaritan bit.” She knew him? I didn’t know which bit made the feeling of empty spread in my stomach, the fact that she knew him, or she knew him. Because from the way she was grinning in a slightly flirty, slightly too cosy way meant she definitely knew him. Every bit of him.