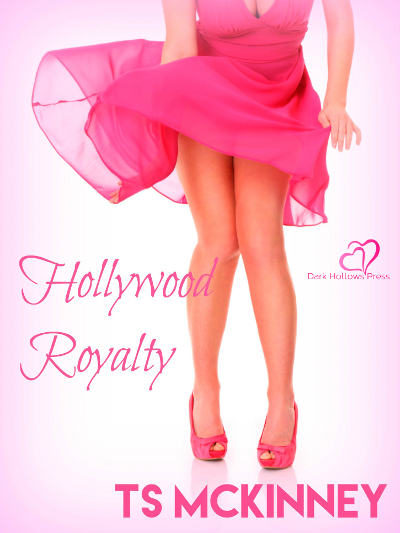 Victoria thought that she would give anything for the role of Annabelle Hutchinson. She just didn’t realize what she would end up losing.

Victoria Winstead: My parents are the reigning King and Queen of Hollywood and since I am their only child, that clearly means I am a pampered princess who is accustomed to getting everything I want, when I want it, and how I want it…and right now, I want the most coveted role in Hollywood. Only one thing stands in my way.

Grayson Leman: This bastard is the only son of the reigning Prince and Princess of Hollywood and I hate everything about him, always have and always will. Our families have a history and it isn’t pretty. It’s ugly, Hollywood style. Oh yeah, he’s the one thing standing in my way.

Not to worry, though…I am Hollywood Royalty.

“You leaving in the morning, Gabe? Or staying the day?” His band members got up and shook his hand as he started to leave. They didn’t tease him, but I could tell they wanted to. Badly.

Honestly folks, I didn’t want to say anything. It had been my vow to myself to give him the silent treatment all evening long. I had done so well. I should probably be nominated for an Oscar for my performance. Not one time did I lean in to sniff his intoxicating scent. Nope, I didn’t. Nor did I allow my gaze to stray toward that body that was made for nothing but pure undiluted sin. Nope, the only time I looked at him was to roll my eyes or glare. Ignoring him had been my only task for the evening. I had been an awesome bitch…up until now. For some reason, unknown to me, I couldn’t stop the word from slipping between my lips as he turned to walk away.

Memphis had to struggle to keep the full blown smile from covering her face. Gabe didn’t even try to hide his reaction. He slammed his fist on the table. The rest of the table just looked shocked and appalled by my outburst. I felt a blush start to stain my cheeks and I fought furiously to clamp down on the feeling. I didn’t need to feel bad for being mean to him or embarrassing him. He, my friends, is the enemy. Yet, I wasn’t really as proud of myself like I’d always imagined I would be in a situation like this.

He stopped walking and stood with his back to us for several long, intimidating seconds. From the way the muscles in his back quivered, I believe he was trying to control his temper. Oh, well. I wasn’t really worried. It isn’t like Mister Boy Scout would ever hit a girl, right? I felt myself start to fidget when he just stood there. We had also caught the attention of several of the patrons that were seated around us. In fact, I believe we were making quite the spectacle of ourselves.

“Just go, Grayson. Don’t do it,” Gabe pleaded. He glared at me in disgust. “You don’t have anything to prove, especially to her.”

Finally, Grayson slowly turned around and looked me dead in the face…hard. This time, I definitely started fidgeting in my seat. His intense stare was breathtaking with his bright blue eyes and girly lashes. God, did I mention how hot he was? “What did you say to me?” he asked quietly. When he’d been on stage singing, his voice had sounded like hot whiskey – now he sounded cold and furious. Well, he could just get over himself. I didn’t like him. I wasn’t trying to be his friend or suck up to him to get him to star in their movie. I, my dear friends, didn’t give a flying fuck what he thought about me.

“She called you a pussy, dude.” Gabe answered loudly when I failed to answer promptly enough to suit him. Of course, when Gabe said it, everyone within a ten mile radius heard him. I was seriously getting tired of dear ole Gabe, really fast.

Grayson’s jaw ticked and his mouth formed a frown that didn’t do a damned thing to make him unattractive. I guess this is why our families had always worked so hard to keep us apart from each other. He was hot enough that I wouldn’t be able to keep my hands to myself and I was bitchy enough that my very touch would soil his pure skin.

“Yep, I called you a pussy, Grayson. Got a problem with that?” I sounded a lot tougher on the outside than I was feeling on the inside. It actually bothered me to be mean to him and I had no clue why.

“Yea, I guess I do,” he answered with a lazy shrug of his perfectly shaped shoulders—you know, not too much muscle

but just enough to make a girl swoon? “Actually, I have a problem with how you’ve treated me all night long,” he explained as he closed the distance between us with a determined stride. Once he was close enough, he grabbed his vacated chair, swirled it around, slammed it right up against my knee, and straddled it. When we were practically eye to eye, he continued, “I’m pretty sure I’ve never done anything to offend you personally, but you still act like a bitch. Why is that, Vic? Are you afraid of me?” His voice was low enough that I was the only one that could hear him unless people rudely moved in closer. I knew they wanted to, but they didn’t. Actually, Memphis wouldn’t let them. It was a good thing Memphis could multi task because she was having to keep other patrons away from us and keep Gabe in line at the same time. Gabe was even more furious than Grayson was and that made about as much sense as the way I felt with Grayson being so close to me.

“Afraid of you? Mister Boy Scout? I seriously doubt that,” I answered smugly. “I just don’t like you.”

Well, he had me there, but I didn’t intend to back down. “I don’t have to know you to not like you. Don’t let it hurt your feelings, sweetie. Are you going to cry like your mommy did?”

Yea, I went there. The minute I did, I wished I hadn’t. Too late. I watched many emotions cross through those blue eyes—hurt, anger, surprise, lust…

He tilted his head to the side and studied me like I was some kind of sideshow freak. I could tell he was pondering something. Maybe punching me in the face and seeing if he could make me cry? Right when I was about to cave and apologize, he leaned in and whispered in my ear, “You want to make me scream, don’t you, Vic? You want to hurt me?” I could feel his hot breath tickling my neck and sending waves of desire rushing through me. Actually, those waves had started the minute he had gotten close to me. It was his hot breath or the way his tongue almost touched my ear when he spoke. “You wanna do it on stage? How brave are you?”

TS McKinney lives in East Tennessee with her high school sweetheart/husband and all the countless dogs she picks up from deserted country roads. Her professional career has been in business but her heart has always belonged to the fantasy world found in books.

Creating wicked worlds where one can meet the perfect hero – and then do anything to him that you want – has been a hobby that has brought her plenty of hours of fun and naughty entertainment.

When not working, reading, or writing, she loves to spend her time with her family and forcing them (because they don’t really have another choice) to allow her to redecorate their house…and listen to her naughty…sometimes sadistic stories.

One Response to “Hollywood Royalty! New Release by TS McKinney”