Most of you know by now about the Where’s Holly contest running through the month of August. (check this link for details) I’ve asked you all to send me your photos of all the cool and interesting places you read your Holly, or even better yet, the ordinary places you read The Initiation of Ms Holly because anyone who has ever enjoyed reading a good book knows that the best thing about a good book is that it has the amazing ability to take us out of the ordinary and transport us into the extraordinary.

For writers, it’s no different. When we’re in the zone, when the Muse is with us, we are transported to extraordinary places in our imaginations, places we can’t wait to put down in words and share with other people.

My experience of writing The Initiation of Ms Holly was just such an experience, an experience that started in the dark in the Eurostar tunnel, and while I wasn’t going anywhere, my imagination was off and running, and a year later, Holly was born.

The first five days we’ll have lots of company, walking with a group of friends we often walk with in the Lake Disctrict, led by the amazing Brian Spencer and his equally amazing wife, Vron, who have been instrumental in my research for the Lakeland Heatwave Trilogy. But the last nine days it’ll be just Raymond and Holly and me hoofing it across England.

Now that the itinerary is set for B&Bs and the Coast to Coast is really going to happen, I’ve spent evenings pouring over the maps and studying the rout, getting butterflies in my stomach at anyplace I’m not clear on. And with moors and fells and ruins of mines and bogs and villages and farms and long stretches of open space, there are lots of places to be unclear on. Fortunately the C2C is a well-travelled walking trail, so we won’t be running the risk of falling off the edge of the earth, though we might occasionally run off the edge of the map. It’s by far the longest walk we’ve ever attempted on our own.

I’m confident in our navigation skills, and we’ve both trained for it, but we have one 24-mile day that will definitely be pushing our limits. I’m 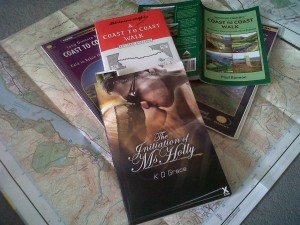 nervous and I’m excited and I’m already there in my mind. I’ve dreamed about doing this for a long time.

And what does any of this have to do with writing? Well, everything actually. I have two novellas and the another novel I have to walk. I’m just hoping 190 miles will be enough. And Holly, well she’s already a world traveller, so I expect her to acquit herself very well.

Today we drive to Cumbria.

Rachel Leigh Gives an Explicitly English Story Behind the Story → ← Is Tonya Kinzer The Boss’s Pet?