I wrote my new book, Passionate Plots as a guide to writing sex scenes both for emerging erotica writers and writers looking to branch out in this area, or who feel that their current story might benefit from some added heat. The main thrust of the book – as well as specific advice on writing a good sex scene and writing exercises to help you do this – is that sex scenes, whatever your genre, need to be integral to the overall plot and make sense in terms of your characters. One way to ensure that your erotic scenes don’t just pop up out of nowhere is to ensure that there’s some build-up of sexual tension between the characters involved. Here’s a little extract from the book on conveying those tension levels….

‘What is sexual tension? It’s that simmering between two people who are attracted to each other but are fighting it, or can’t be together for whatever reason, or the first time you talk to someone and you look at each other and just know you’re going to end up between the sheets, but you’ve only just met and you’re in public/company so it wouldn’t be polite to say anything. If the couple becomes long-term, sexual tension evolves into chemistry, where you’re finishing each other’s sentences and even your friends sense the simmering heat between you.

Even if you’re writing in another genre, if you’re planning on including erotic scene, it’s still important to have some levels of sexual tension that give the reader a build-up. Otherwise the sex scenes appear to come out of nowhere and can jar the reader out of the story. Sexual tension serves to give the reader a hint at the scenes to come, so by the time they reach the first love scene they’ll be not just expecting it but looking forward to it. It can also serve your plot in other ways; a little sexual tension simmering away can work with other points of conflict in the story to up the overall rising tension and drama. Particularly in thrillers and action-adventure novels, two characters battling outside conflict while sexual tension simmers away between them really adds to the levels of excitement and urgency. Just look at some Hollywood films for examples of this. The same principle can work in horrors and Westerns too. Historical fiction can also benefit from a good dollop of sexual tension and done well it can really add to the plot; think of the restrained and corseted Victorian era with all that passion bubbling under the surface for example.

Of course sexual tension is subtle and hard to describe; like that all elusive chemistry you know when it’s there but it’s almost impossible to pin down and define. Therefore, although our stories might need this form of tension, it’s not the easiest thing to convey in words, unlike a film where you can practically see the sparks fly between characters. Here is where you really need to be able to ‘show not tell’. Telling your readers there’s sexual tension between your characters, even in the first-person, won’t let them feel it.

So how do you do it? There are a variety of ways, from body language to interior monologue, but dialogue is one of the most powerful ways to convey that simmering sexual tension….

The use of banter between two characters trying to fight or avoid their attraction to each other is a strong device in romance novels, and if this is an area you’re not familiar with I suggest you read a few and see how other writers do it. ‘Banter’ can be used to refer to flirting, teasing, even a heated debate if it’s already been made clear the characters would rather be ripping off the others’ clothes than their head.  Whatever the context, banter is witty, fast-paced dialogue with a sexual edge. You can make this sexual aspect quite clear with the use of flirting or innuendo, or subtle with the use of subtext.

How do your characters flirt? Think about their personalities and don’t make your heroine turn into a pouty-lipped giggling hair flicker if she’s usually quiet and serious, or a ballsy no-nonsense kind of gal, or your down-to-earth guy metamorphoses into Mr Charmer. Let your characters lead.

Sexual tension between characters often arises due to some interpersonal conflict between them. This may be because of the situation they’re in, one a cop, the other a fugitive, to give an obvious example much beloved of Hollywood screenwriters, but is at its most effective when there is a conflict between their personality types. As we all know, opposites attract.

Innuendo is a great way of injecting an element of simmering sexual attraction into a conversation without the characters blatantly saying ‘I really fancy you.’

The only thing to be careful of is that your dialogue doesn’t become too obvious, with your innuendoes becoming blatantly sexual in a 1970’s skin flick kind of way. No ‘gun in the pocket’ jokes, please.

Sub-text is a subtler way to show tension of any kind in dialogue – it’s the reading between the lines, what the characters don’t say – and it only works in the context of what has gone before. For example, look at this simple exchange;

This could mean anything. John and Jane could be old friends having a casual conversation at a school reunion, with no further implications. However if we already know that John and Jane are old flames that are still attracted to each other, and that this is the first time they’ve seen each other since a brief night at a friend’s wedding where John asked Jane for dance that turned steamy and ended up with him sweeping her out of the ballroom onto a balcony for a passionate embrace, then the exchange takes on a different meaning. We know they are now both thinking of that last frenzied embrace, and that the tension is growing between them.

What isn’t said can be as powerful as what is. 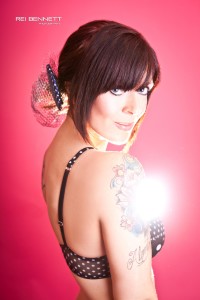 Kelly Lawrence is a writer, teacher and mother from the West Midlands. She is the author of the bestselling erotic memoir ‘Wicked Games’, New Adult romance ‘Unconditional’ and two writing guides, of which ‘Passionate Plots’ is the first, to be followed by ‘Building Your Story’ in August 2014. She is currently working on a book aimed at young adults called ‘The Anger Games’ exploring teen trends in digital activism, and also writes historical romance and contemporary crime for Harlequin as Michelle Kelly, with ‘Sins of the Children’ her first major crime novel being released later this year.
You can contact Kelly here:
https://www.facebook.com/kelly.lawrence.9400
http://michellekellyauthor.wordpress.com/
@lotuswriter
Buy Passionate Plots Here:
http://www.amazon.co.uk/Compass-Points-Passionate-Writing-Stories-ebook/dp/B00IIWM622/ref=la_B00DG8CZNS_1_1?s=books&ie=UTF8&qid=1395307413&sr=1-1
http://www.waterstones.com/waterstonesweb/products/kelly+lawrence/compass+points+-+passionate+plots/10196395/