‘The Pagan Sorceress’ and the Yorkshire Wolds landscape

I’m delighted to be invited onto K D’s site.  Earlier in the year she contributed a blog to my web site about the influence of the Lakeland landscape on her book ‘Body Temperature and Rising’.  So, I’m going to return the favour and say how one of my favourite landscapes, the Yorkshire Wolds, influenced my story, ‘The Pagan Sorceress’. 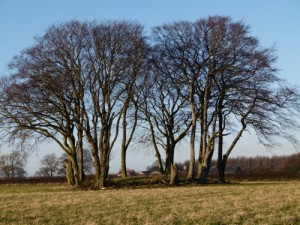 The initial spark for writing a story involving ancient burial mounds came from a book I came into contact with at my place of work.  This was ‘Forty Years Researches in British & Saxon Burial Mounds of East Yorkshire’ by J R Mortimer.  Yes, I know that sounds pretty dry, but it’s a remarkable piece of work and just browsing through it provided me with the inspiration for the idea of a story.  In fact, I have Sam, my archaeology post-grad character refer specifically to this book in the story.  In the late 19th/early 20th century J R Mortimer surveyed and excavated loads of Neolithic and Anglo-Saxon burial mounds scattered across the Yorkshire Wolds, an incredible 196 barrows over 120 square miles!  Some are still obviously visible; others have been affected by modern farming and are only visible from aerial photographs or detailed investigation now.  Seeing this book really brought home to me the extent of the evidence of pre-Roman and Anglo-Saxon settlements in the local area. 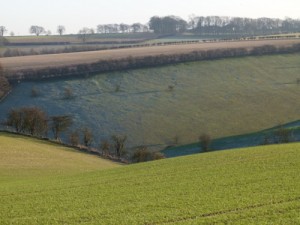 This captured my imagination and I was determined to seek out some of the sites and find out a bit more about them.  So, armed with an Ordnance Survey map annotated with sites to look for from the book, I set off into the East Riding countryside on a barrow hunt!.  I went to a few sites but the one that really captured my imagination was a couple of burial mounds that form part of what is know as the Painsthorpe Group near a village called Kirby Underdale located just off the Wolds Way national footpath.

These ancient earthworks and tumuli are a significant part of the Yorkshire Wolds landscape.  Typically the burial mounds would have been sited on the top of theWoldswhere they would have been in full view of village communities in the dale so they could honour their ancestors.  They would have originally been covered in chalk taken from the Wolds and so would have stood out as white beacons on the crest of a hill.  The Yorkshire Wolds are something of a hidden secret; though David Hockney’s paintings and digital art work of the area may be about to change all that.  Parts are cultivated with farm land but when you get off the beaten track into the dry chalk valleys they are every bit as beautiful and majestic in their own way as the landscape inYorkshire’s more famous national parks.

These ancient burial mounds were all arranged into groups.  Now, and this I think is the truly amazing bit which really tickles my Pagan antennae, many of these groups were arranged by design to resemble the seven star formation you find in the ‘Ursa Major’ constellation..  How incredible is this?  Our Neolithic ancestors were so in tune with their environment, and drew such religious and mystical significance from it, that they consciously arranged for their burial chambers to reflect the celestial firmament.

Anyhow, it was these two particular tumuli I chose to describe as the site for Sam to conduct her re-enactment of an Anglo-Saxon burial ceremony.  Her reconstruction has consequences that she could never have guessed and her life, along with that of her friend Dan, becomes entwined with those of Cyneburh, the Pagan sorceress of the title and Alhfrith, her hero-warrior lover, from nearly 1,500 years ago. 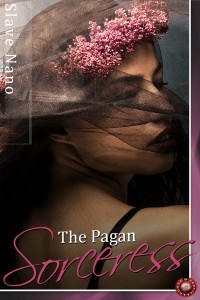 If the author of the Anglo-Saxon heroic tale Beowulf did erotica what might it have sounded like?  That’s the challenge author Slave Nano has set himself in his newly released novella ‘The Pagan Sorceress’.

Sam is about to carry out a strange experiment.  She is an archaeology student specialising in reconstructive archaeology and her idea is to recreate an Anglo-Saxon pagan burial ceremony.  It’s Samhain eve and the night of a full moon so it’s the perfect time to carry out such a ritual.  She enlists the help of her friend, Dan, and together they go off to the site of a burial mound where wonderful swords and sceptres were excavated many years ago.

A travelling story teller is at the court of a Saxon king.  He recites the tale of two soul-entwined lovers from an earlier, more chaotic, period when king’s warred amongst each other.  He tells the tragic tale of Cyneburh, Pagan sorceress and daughter of the mighty Pagan king Penda and Alhfrith, son of Athelwald the king of Deira, her hero-warrior lover and betrothed.  The two kings have formed a mighty political and religious alliance but, more than that, the young woman and man have forged a passionate union of their own.  But this new alliance has enemies and before their wedding night is over there will be a tragic outcome.  As King Penda stands at the edge of their burial chamber he invokes a curse of vengeance against the murderous act perpetrated against him.  But, how many years will it take before he is finally avenged?

As Sam stands on top of the burial mound dressed as an Anglo-Saxon pagan priestess with Dan at her side, is she aware of what ancient powers she will invoke as their lives become entwined with those of Cyneburh and Alhfrith from many centuries ago?  Will the pagan king’s oath of vengeance be fulfilled?  Will the souls of the two lovers be finally released?

“… just imagine, not a mound of grass but a mound of chalk.  When it was erected, immediately after the burial, it would have been brilliant white.  It would have stood out from the landscape and you’d have seen it for miles around.  So just visualise a bright white mound of stones, fronted by two yew trees and the night of a full moon, say from the cycle in 642 for arguments sake.  Here, take this.”

Sam, who had been rummaging in one of the ruck-sacks for something whilst talking, slung a red and white measuring stick at Dan who reacted nimbly and caught it in his hand.  A second came flying at him.

Dan glanced down awkwardly at his watch whilst holding the two poles.

“Quarter to midnight.  But what’s significant about that?  Are you waiting for witching hour?” he laughed.

“This is serious Dan.  I want to prove a theory I’ve got,” she replied.

She took the map in her hand and carefully counted fifty paces from the centre of the mound with Dan following her.  She glanced quickly up at the sky.

“Right, put one measuring pole here,” she said digging the heel of her boot into the chalky soil.  Dan dutifully did as he was told and buried the end of the stick into the soil.  She walked sideways another twenty paces still checking the map and directed Dan to put the other pole into the ground.  The two measuring sticks were buried at the exact location where the two yew trees would have stood.  She raced back to the centre of the mound, Dan running after her.

“I don’t get it Sam, what are you trying to prove?”

But as soon as he had mounted the mound and turned around to face the two poles he gasped in astonishment.

“Yes, Yes.  That’s it!  I knew it,” Sam shouted punching her fist in the air and jumping animatedly up and down on the burial mound. “Just as I’d imagined it.  It was a guess – a calculated one – pure instinct really.  But I just knew it!”

They both stood on the top of the burial mound.  It was midnight on Samhain eve and as they stared back the full moon was in exact alignment between the two measuring sticks casting them and the mound in a luminous glow.

“Fuck, I knew it, I knew it!” she exclaimed.  “This isn’t just any old burial mound.  I’m convinced of it.  You’ve seen the pictures of the objects buried there and now this.  This was done by design.  It’s part of the meaning of the site.  There was somebody significant and very powerful buried here.”

They both laughed loudly at the excitement of sharing such a magical moment as they stood on the ancient site of pagan ritual bathed in white light.  Sam slung her arms around Dan’s neck and spontaneously, caught in the thrill of discovery and the majesty of the setting, gave him a long passionate kiss. Of course they’d kissed like that before, but there was a tingle of something different between them as if the setting and the full moon had some influence over them.  Dan could feel it and sensed Sam was affected as well.  There was an embarrassed silence after they broke off from their kiss until Sam took up her discourse again….

You can find out more about him and his writing at http://www.slavenano.co.uk