Face Time: Do We Need It To Truly Know Someone?

How much of what we think we know about our lovers has to do with seeing their faces? What if we couldn’t? What if we had no input from that most expressive part of the human body? I’ve taken that premise to the extreme in The Initiation of Ms Holly. Oh my idea isn’t original. If any of you are fans of Greek mythology, you’ll know the story of Psyche and Eros. Psyche is wed to a monster, or at least so she is told. This is the only way she can saver her people from the wrath of the gods. She is whisked away to his mountain lair, which turns out to be the most beautiful palace she can imagine. This monster, her husband, comes to her only at night and makes such beautiful love to her that she is very quickly, deeply in love with him. His only demand of her is that she never see his face. Then one night, her curiosity gets the best of her and she lights an oil lamp and looks down at him while he sleeps to discover her husband, the monster, is none other than Eros, the god of love. But … there’s always a ‘but,’ isn’t there? A drop of hot oil falls on him and wakes him and he flees. The rest of the story is about Psyche’s trials and labours to win back his love.

Holly isn’t listed as free in the US. HOWEVER!  Since we all thought it was,  we are making sure our US readers are still getting their free copy of Holly.  If you are not on the mailing list, but did try to download Holly to no avail, please comment at the bottom of this post with your email address, and the lovely folks at Accent will sort you with a Holly all around.

(If you recall, Rita Holly and the mysterious Edward met on a dark, malfunctioning train. They have never actually seen each other’s face. This is an excerpt from their first date)

With a start, Rita turned to find herself face to face with a woman swathed in black, caressing a martini. The parts ofher anatomy that weren’t being fondled by designer silkwere dripping in pearls and diamonds, which Rita had no doubt were real. In fact, she was sure any one item of thewoman’s stunning ensemble would have maxed out her credit card and cost her first born, if she ever had one. Intimidation hit like a slap in the face, and she would have happily slipped back out the door and made a run for it ifshe hadn’t been caught in the act, or at least that’s how shefelt. She stepped forward and offered a weak smile. ‘Yes. I’m here to meet Edward.’ She hoped no last name wasrequired.

The woman did not smile back. ‘Of course. You must be Rita. Edward’s expecting you. Come with me.’

She was led through a restaurant full of sleek diners who spoke quietly over the tinkle of fine crystal and silver, then past a dance floor, where couples moved to a big band medley. Up above the dining room on a cast iron catwalk, no doubt a remnant of the original warehouse, stood the exquisite Vivienne gazing out over the diners below like a queen overlooking her realm That was pretty much what she was, Rita thought. By her side, and slightly in the shadow,stood a man bending to whisper in her ear. She didn’t seempleased with whatever he was telling her.

The woman in black hurried Rita past the queen of The Mount and her consort, down a long hallway that opened on to several private dining rooms, most with private dance floors surrounded by dark, intimate booths.

‘The Mount is a dance club,’ the woman said, noticing Rita’s curiosity. ‘Mostly ballroom and Latin. It was once an old 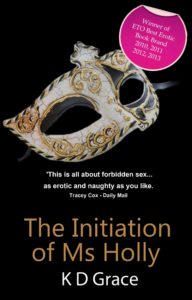 wool warehouse. Restoring it was quite a risk, but you’d be surprised at the number of people who love to dance.’Rita wondered what planet this woman thought she was from that she needed to tell her the obvious. Everyone in London knew the guidebook history of The Mount. But it was what the guide books didn’t say that intrigued everyone.

In one of the more intimate dining rooms the woman guided her to a lushly upholstered booth near the back away from the dance floor and the few other diners who occupied the room.

‘Edward will join you shortly.’ With that, the womanturned on you-could-only-afford-to-fuck-me-in-your-dreams stilettos and retreated back through the maze of rooms.

Before she was out of sight, a server approached Rita’stable with two glasses and a bottle of Moët et Chandon onice. ‘I’m Aurora.’ She sat her burden down on the table. ‘Edward has instructed me to apologise for his small delay.’It was only her name and a slight feminine pout which assured Rita that Aurora was actually a woman. Her androgynous features were accentuated by white blonde hair cropped short. She was dressed in a black suit, waistcoat and tie, completely camouflaging the swell of her small breasts. When she spoke, even her voice was deep, and gravelly.‘There is one other thing Edward asked me to give you.’From her pocket, the waitress produced a black velvetblindfold. ‘He asks that you wear this. He said you wouldunderstand.’

A frisson of anticipation laced with the tiniest hint of fearran up Rita’s spine and accumulated at the tips of hernipples as the waitress stepped behind her and secured theblindfold. That done, she filled a glass and placed it in Rita’s hand. ‘Enjoy the fizz,’ she said. Then she left.

The scent of oregano and basil and other more subtle seasonings blended with the smell of expensive perfume. Glasses clinked, people laughed, and somewhere in the background the melodic strains of String of Pearls wafted on the air. She had only just tasted the champagne when a warm body scooted into the booth next to her. She recognised Edward’s scent a split second before his hand cupped her cheek and his mouth covered hers, familiar territory, she thought, as her tongue became reacquainted with his.

‘I hope you don’t mind the blindfold,’ he said when hecame up for air. He slid warm fingers under the spaghettistraps and caressing her left shoulder. ‘Being in the dark was so much fun last time.’

She ran a hand over his cheek, raking a thumb lightlyover a fluttering eyelid. ‘What about you? You’re not wearing a blindfold. That’s hardly fair.’

He chuckled, and she felt his warm breath against herearlobe. ‘I never said I play fair. I was right though. You areexquisite, but I wouldn’t have imagined your hair to be chestnut’ He caressed her tresses, pushing a strand back behind her shoulders to fondle her nape. ‘For some reason Iwas certain that cascade of silk would be strawberryblonde.’ He ran his other hand up the outside of her thigh, toying with the exposed edge of her garter belt, making hersquirm. ‘Guess in some cases, there’s just no substitute for the sense of sight.’

‘You will in good time. That is if you want to play my little game. Of course you could take off the blindfold. Ican’t stop you, but admit it, it’s fun not knowing. A bit of an adventure, an initiation almost.’

‘Yeah, you know, at the beginning, when a man and awoman are just getting to know each other, it’s like an initiation, don’t you think?’

He chuckled. ‘Can be. Could be, if you want it to be.’ He nipped her earlobe, ‘Or maybe like an induction into somesecret cult with secret rituals of wild, kinky sex.’

Another chuckle. ‘All you have to do is keep theblindfold on until I say you can take it off. Let your othersenses do the work.’ His finger slipped beneath the suspender to stroke her thigh, making concentration next to impossible.

‘I’ve always wanted to be a member of a secret sex cult.’Breathing was becoming more of an effort as his touchbecame more insistent. ‘OK then. I’m in. Have your way with me.’