A Ghost, A Succubus and NaNoWriMo

Two of my favourite characters in all of my novels are Anderson, the ghost from my Lakeland Witches Series, and Cassandra, the succubus who becomes his lover in the second novel of the series, Riding the Ether. Of all the incredibly sexy, deliciously fun love stories I’ve ever written for my character, theirs was maybe the most fun. The whole Lakeland Witches series was one of the most fun series to write as well. Since this month is NaNoWriMo – National Novel Writing Month, it seems appropriate to share something that had its roots in NaNaWriMo. Body Temperature and Rising, novel one of the series, was my very first NaNoWriMo success. This year I’m doing NaNoWriMo for the fifth time, with three of those novels having been published. The other two aren’t quite ready for the world to see yet. I hope you enjoy Cassandra’s observations of and reflections on Anderson. 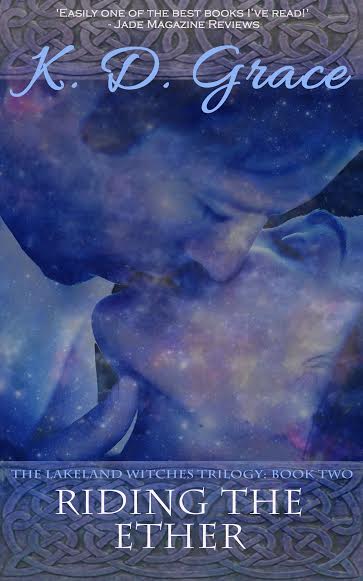 CASSANDRA WOKE TO THE cold mist of her own breath rising in the room above the mattress and pulled the thick duvet up tighter around her. She had expected the fire to be out by the time she returned, though she had banked it as best she could. It was then she realised she had the tiniest bit of a headache. The fact that she had a headache at all caused a clench in her stomach that was far more painful than her head.

She never had headaches unless she had taken too much. And she never, ever, did that. Not any more. She hadn’t done since she was in uni, and then she hadn’t known any better, hadn’t known what would happen, hadn’t known how to control herself. And once she did know what would happen … She pushed that thought out of her head. Still, how could she have taken too much? She had been so careful with her research, so careful with her training. Anderson was a ghost, and they’d been in the Ether, and he had seemed fine, had said he was. He’d certainly seemed all right when she had left him. More than all right, actually.

Suddenly, the clench in her stomach and the ache in her head were both overshadowed by the rhythmic thrumming between her legs that buzzed up her spine. It was the feel of him. The feel of his energy still on her, still in her. She reached between her legs and felt his wetness still there. Even though they’d been in ethereal bodies, sometimes a bit of the Ether escaped back into the World of Flesh. Fooling the Ether, her grandmother used to call it.

Even the feel of his semen against her fingers tingled. She brought it to her mouth, strangely scentless for semen, but that was the curse of ghosts who wore the flesh. They could generate no scent. She wondered if he had been able to smell her scent on him after they’d left the Ether. There was always a scent on her when she came back from the Ether. It was the scent of high- altitude cold and metallic bite. She hoped it was more than that that lingered on him when he left. But then it would be, wouldn’t it? Much, much more, though she wasn’t sure about scent.

She licked his juices from her fingers and instantly she knew that he was indeed all right, if a bit confused. He was very all right. She slid her hand down for more, feeling the buzz of energy relax the knot in her stomach and clear her headache until her whole brain felt like a window, open to all she needed to see, to feel, to experience. And fuck, it was amazing! It had always been amazing, like a drug she dare not allow herself for fear of becoming addicted to it, but this was bloody awesome! It was more than her research had ever prepared her for, way more!

With little more than a stroke, she came, trembling all over as she reached between her legs for more of his juices, unable to hold back shudders that led to moans and, embarrassingly, nearly to bellows that vibrated her whole body. With each clench and tremor, her pussy forced out more of his delicious essence, and she wiped it, rubbed it, slathered it all over her body. Great Christ, she wondered what the man must have smelled like when he lived. He was … He was a rider of the Ether. And he had been for damn near ever. He was power and virility and physicality in ways she had only dreamed of. And she could make love to him. She had made love to him. Great Goddess, how she had made love to him!

With her orgasm mellowing to ripples, she sent out her fetch, that magical part of her that was, in itself, almost like a ghost, her essence, sent forth to explore beyond her body, sent forth whenever she rode the Ether.

She could have never breached the protective magic of Elemental Cottage before. But now she was connected to Anderson. She wore his essence inside and out. She passed through those boundaries and protective spells like water. And she would be able to find him anywhere, in the flesh, or not. She paid no attention to the house, took no time to marvel at the domain of the witches she so admired. She was sure it was amazing, but she had no time for that. She had sent her fetch out for one thing, and one thing only, and that was to find Anderson, to look, just look at him, to reassure herself that she hadn’t dreamed such a man, such a coupling.

And he was there, exactly as she knew he would be. He slept in the arms of his high priestess, slept the deep, even sleep of dreams, dreams which he didn’t need – and yet he chose to have them, in the vulnerable act of sleep that he also didn’t need. He slept wrapped around her. They had had sex. Though Cassandra could not smell him, she could smell the woman, earthy and slightly piquant from the labour of lovemaking. He slept, but the woman, Tara Stone, did not.

She could sense the woman’s worry, her restlessness, but that didn’t concern her at the moment. It was Anderson in his unnecessary sleep that interested her, fascinated her, drew her. He was erect. In a thought she felt was worthy of a teenager with a crush, she wondered if he was excited by dreams of her. She could find out easily enough, but she never invaded people’s dreams on purpose. She never entered people’s private places.

She ran her hand along his flank, feeling her own essence against his flesh as surely as she felt his on her. She could take him now while he slept and he would never know it. She could give him such sweet dreams of her, such passionate dreams that he would come in his sleep, and she would wear the energy of his release, the energy of his dream, like a tight- fitting skin – a skin that would nourish her, give her strength in a way her own never could. That she could do such things frightened her. That she still wanted to do such things frightened her even more. She bent over him and pressed her mouth against his parted lips, breathing a kiss against them, and he sighed softly.

The woman started and sat up, looking around the room. Cassandra couldn’t imagine that she was able to sense her presence, but she knew Tara Stone’s reputation so just in case, she quickly pulled her fetch back to herself, back to her own bed, and her flesh felt all the more vibrant, all the more alive for having been with him, even if it had been from a distance.

Her clit felt heavy. Her nipples ached, and she masturbated again. It was in the receding tremors of orgasm that she noticed the ghost watching her, peeking around the edge of the hanging blanket that separated Cassandra’s sleeping space from the rest of the bothy.